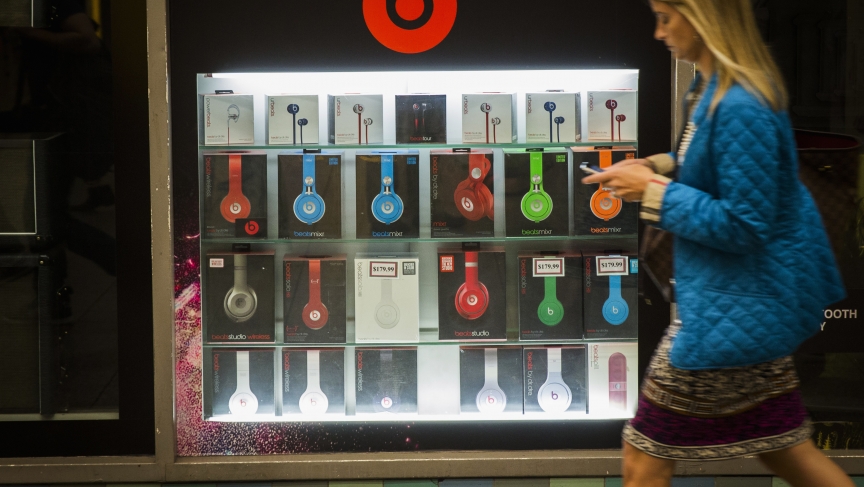 The Beats headphones are well-known, but it's the Beats streaming music service that is said to have been a major attraction to Apple, which purchased the company.

If you use a music streaming service, odds are you love it and you listen to it often — at home, in your car, on your radio. But you probably don’t know this: if the song you just played was recorded before 1972, the artist who recorded it receives no royalty payment for that play. Nothing. Not a cent.

Now, there’s an effort underway to change this. A new bill in Congress, called the Respect Act, would apply current royalty protections to all recordings made before 1972. The bill is supported by musicians like the Allman Brothers, Al Green, Melissa Etheridge, and Rosanne Cash. Cash organized a concert in New York City to bring attention to the debate.

“It’s shocking,” Cash says. “These legacy artists that built American music are not being paid. They’re all aging, if they’re still alive. Some are sick [so] they can’t make up for the lack of royalty income by touring. It’s a serious problem.”

If the year 1972 sounds arbitrary, that’s because it is. In 1971, Congress passed the Sound Recording Amendment, which for the first time made sound recordings eligible for copyright protection and, by extension, provided royalty payments for performers. The law took effect on February 15, 1972 — but Congress applied it only to work made from that point on. It was not retroactive.

“Think about this,” Cash says. “Percy Sledge, who’s still alive [and] very ill, recorded one of the most iconic songs in the American canon, 'When a Man Loves a Woman.’ He did not write the song [and] he receives no performance royalty [because] he recorded it in 1966. Michael Bolton, who re-recorded the song in 1991, does receive royalties. ... The inequity of it kind of boggles the mind.”

Cash, who did not start recording until 1978, receives royalties for her performances when they are streamed. Her father, Johnny Cash, who recorded many of his biggest hits before 1972 — classic songs like “I Walk the Line “ and “Ring of Fire” — does not. If the Respect Act becomes law, will Roseanne, as his heir, suddenly see truckloads of money dumped her doorstep? Hardly, Cash says.

The compensation for artists whose work is played on digital platforms is still grossly unfair, she says. “For 600,000 streams on an unnamed subscription service, in an 18-month period, I was paid $104. ... We’re not talking about much money.”

Current royalty laws apply to all digital and streaming technologies — Spotify, Pandora, iTunes, Sirius XM, Internet radio, etc. Streaming services in particular have been under fire to increase the compensation for artists whose music they stream, and 15 percent of the songs they stream are from pre-1972 recordings. SoundExchange, a performing-rights organization that advocates for changing the royalty system, estimates that current law deprived legacy artists and record labels of more than $60 million in digital royalties last year alone.

Streaming services are crying poverty. Cash is shedding no tears, however. “One of the co-founders of one of those streaming services took home more money in stock options than was paid to all American songwriters combined,” Cash points out.

To be fair, it should be noted that many 21st century listeners contribute, intentionally or not, to the current battles over royalty payments and copyright protection. The ethos of the modern Internet is antithetical in many respects to the whole notion of intellectual property: the expectation is that everything is accessible and shareable. Little thought is given to how the people who make the music we love to listen to are supposed to make a living.

“People say, ‘Well, music should be free, it should be like air.’” Cash says. “OK, I’m willing to talk about that — when musicians aren’t the only ones not being paid.”

So, would you be willing to pay a few dollars more for Spotify or Pandora if the performers of the classic songs you love would be getting royalty payments? Let us know what you think.