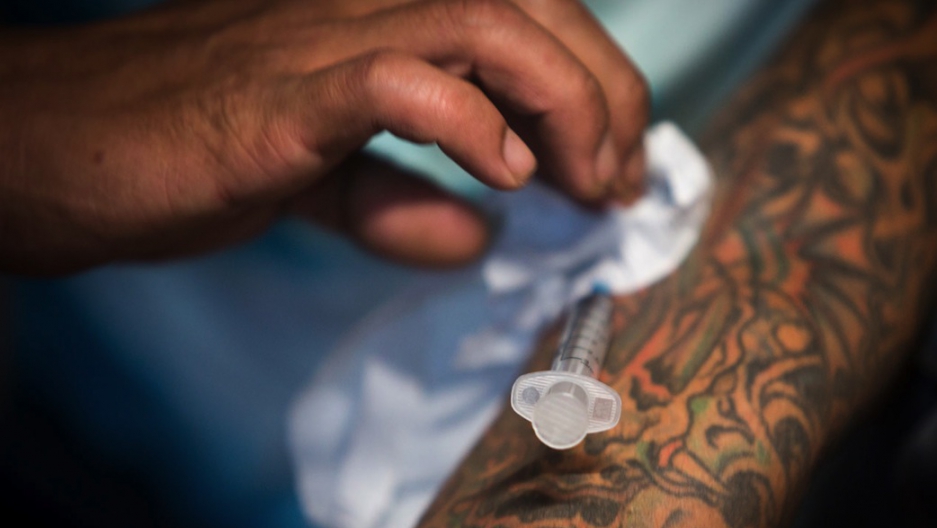 A young ethnic Kachin addict shoots heroin into his arm. Many Kachin leaders accuse the government of "ethnic cleansing" via drugs. "In the lower part of Myanmar, they don’t let drugs circulate. If they did, their generations would also be lost — just like ours."
Credit: Jonah M. Kessel
Share

BANGKOK — Along parts of the Myanmar-China border, where heroin addiction is appallingly common, fresh needles are now so coveted that shopkeepers dispense them as change.

Myanmar’s unruly hinterlands are in the grips of what may be Asia’s worst heroin epidemic — a scourge widely ignored by the rest of the world.

The country is one of Asia’s most dysfunctional and war-torn nations. Its currency is so debased that clerks offer tissues, cigarettes or candy in lieu of notes worth 5 or 10 cents. Many customers rightly prefer a few mints or smokes to worthless, stained, taped-up bills.

But in the heroin scourge’s heartland — along highways leading to Muse, a busy border town abutting China — some roadside shops also dole out clean needles as an alternative unit of currency.

That detail is buried in a report called “Silent Offensive,” by the Kachin Women’s Association of Thailand, which monitors abuses in Myanmar’s remote borderland states of Shan and Kachin.

The report notes that many gas stations also make change using bottles of sterile water, which addicts draw into syringes to turn powdered heroin into an injectable liquid.

Within the region, heroin is potent and cheap. A single dose can sell for as little as $1. Large swaths of Myanmar’s northern jungles are controlled by guerrilla armies, many of them now allied with the central government. These quasi-lawless hills churn out almost all of Asia’s heroin. Only Afghanistan produces more opium, heroin’s key ingredient.

GlobalPost’s award-winning investigation of the epidemic turned up communities where heroin is sold as openly as vegetables. In Kachin State’s capital of Myitkyina, needles are strewn in the fields, on the streets and on the local university’s campus. In the internet cafes, patrons are warned not to shoot up while checking email.

More from GlobalPost: In Kachin, the government stands accused of 'genocide' by heroin

“Where we live, police can barely reach us. So people make up the law themselves,” said Esther, 61, in a previous interview with GlobalPost. She’s the founder of an anti-drug vigilante group near Muse, where syringes are traded as currency.

“In many villages, every home contains an addict,” Esther said. “We all have personal tragedies. My husband and son got hooked and sold everything in the house — even bags of rice.”

Addicts in this far-flung region often check in to jungle detox camps, run by evangelical Christians, where they are locked in cages during the throes of withdrawal. Without restraint, addicts will run off and score more heroin, said James Naw, an ex-addict turned rehab counselor in Kachin State. During withdrawal, he said, “The world is a blur. Even the breeze hurts. You’ll do anything for more.”

In recent years, Myanmar has been depicted as a success story — a totalitarian backwater struggling to become a freer society, with White House backing. But these bright hopes are disconnected from scenes in its untamed borderlands. There, insurgency has endured for decades, and guerrilla forces accuse the government of genocide by heroin.