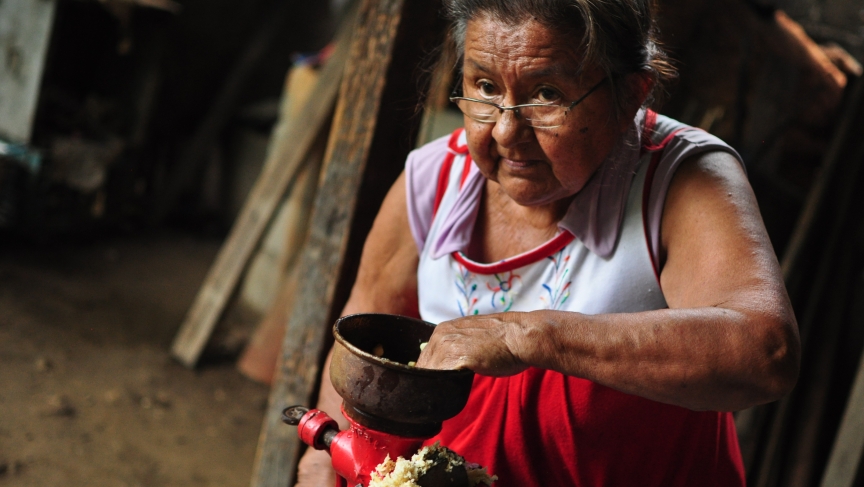 Zahit Salazar used to earn a little money selling clothes she bought near the southern border with Mexico. But Mexico's new checkpoints have made that too difficult. She's had to fall back on grinding corn to make tamales.

Zahit Salazar rises extra early on the days she goes to market. It used to take the 78-year-old a few hours to get from her house in Mexico's southern state of Chiapas to the market town near the border with Guatemala.

Now, it can take all day — because of the checkpoints. She has to pass through at least 10 of them from five different government agencies.

“You waste more time on the freeway,” Salazar says. “More time is lost.”

Over the past few years, Mexico has ramped up its efforts to slow illegal activity — drug trafficking and unauthorized migration — along its 541-mile southern border with Guatemala. With help from the US government, Mexico has set up checkpoints near the border. It has also set up checkpoints on the highway stretching more than 100 miles north of the border, which has given rise to reports of endless commutes and extortion by corrupt officials. Salazar and other locals say Mexican officials use the checkpoints to line their own pockets.

“They are the criminals,” she said. “They say they’re ending corruption but they’re the corrupt ones.”

Salazar has had personal experience with that corruption. About a year ago, she was returning from the market with a bag of clothes to resell to her neighbors. The proceeds would pay her gas and electric bills. Salazar said she never crossed into Guatemala on the trip, but she still had to pass through a customs checkpoint on the way home. She said customs officials saw her bag of merchandise and demanded that she get off the bus.

“They emptied my bag and told me if I didn’t pay $20, they wouldn’t let me keep the merchandise,” she said.

Salazar had a receipt, but it wasn’t official enough.

“They kept saying it was foreign merchandise,” she said.

Salazar had spent every last peso on the purchase and bus fare. Instead of paying the bribe, she had to let the clothing go — but not without shooting off a few choice words at the customs official. Salazar had to beg a passing bus driver to give her a lift home.

Since then, she has joined the Tonaltec Civic Front, a group of other disgruntled residents who, among other activities, are trying to get the government to limit the checkpoints and stop the extortion.

“The people who are just traveling along the freeway, the officers make them get out of their cars,” said Nataniel Hernandez, a local human rights activist, who is helping to organize the residents. “They search them as if they were criminals. It’s a violation of their basic rights.” 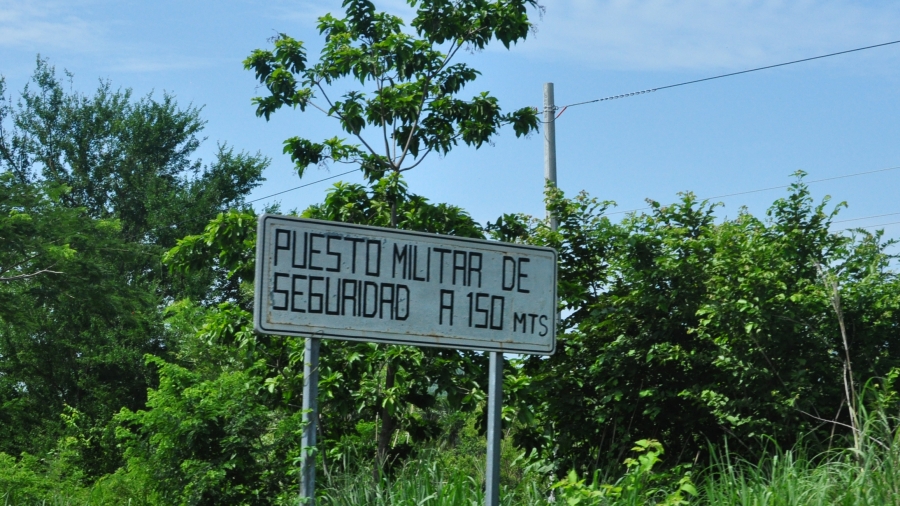 A sign for a military checkpoint along the highway in Mexico's southern state of Chiapas. This one sits more than a 100 miles north of the border with Guatemala.

No national Mexican officials would go on the record for this story, but Manuel de Jesus Narcia Coutiño, mayor of Tonala, where Hernandez and Salazar live, said he was happy about the checkpoints.

“Because they protect us,” Narcia Coutiño said. “There need to be more [checkpoints]. Every day there are more people, more criminals.”

“I think it’s really clear to us that anything that comes across Mexico’s southern border has a very good chance of someone attempting to bring it across their northern border,” said Annie Pforzheimer, who directs the US State Department’s Bureau of International Narcotics and Law Enforcement Affairs in Mexico City. She’s charged with implementing US-Mexico security partnerships.

Over the years, the US has funneled about $2 billion through the Merida Initiative to help Mexico fight drug trafficking and violence within its borders. Some of that money has paid for more equipment and checkpoints on Mexican freeways. According to Pforzheimer, the US government is also supporting efforts to help Mexicans report rights violations that arise at the checkpoints.

“It’s extremely important that there not be an association between a stepped up enforcement and corruption,” she said.

But locals like Zahit Salazar say corruption is a big problem at the checkpoints. Salazar said she was given a stack of papers detailing the clothing that officials confiscated. Some of her family members later tried to get it back, but officials told them it was gone.

“You know that a poor person like me, I’m fighting to survive and here comes this son of a gun and confiscates my stuff,” Salazar said. “They are getting rich off of the poor — because they’re not just confiscating my stuff. How many people are having things taken away?”

After losing everything at the checkpoint that day, Salazar didn’t want to risk it again. These days, to make money, she grinds corn by hand. It’s back-breaking work. She makes tamales and sells them to her neighbors.

It doesn’t really cover the bills, but at least no checkpoints are involved.

This story was produced in association with Round Earth Media. Manuel Ureste contributed to the reporting.