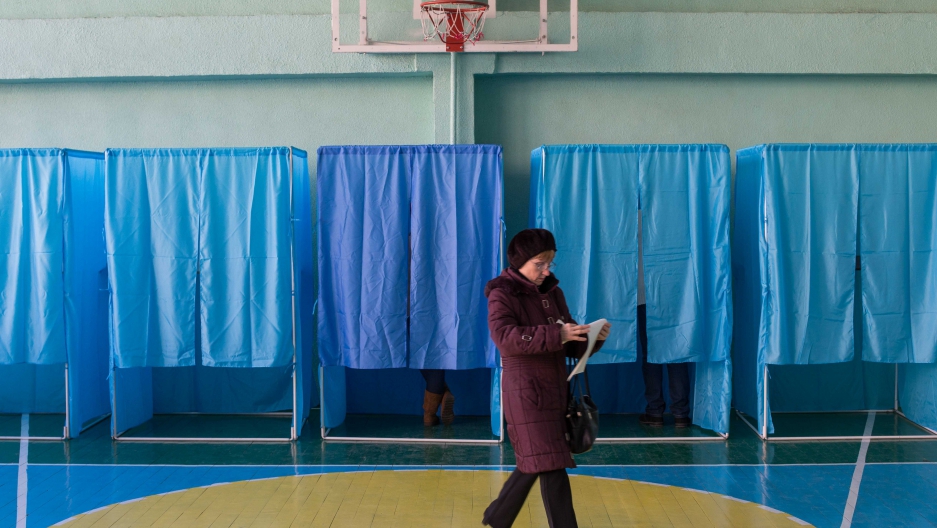 KYIV, Ukraine — The alleged “fascists,” radicals and extremists are out, and the pro-European moderates are in.

If the Kremlin was hoping to exploit what many expected to be news of a more populist and aggressive parliament, Sunday’s results handing a more reform-minded, anti-war faction a sweeping victory may well be a disappointment.

Not only did radical forces fair relatively poorly, but Ukraine’s Communist Party also failed to enter parliament for the first time in what many hailed as a symbolic success.

It was just the sort of message President Petro Poroshenko was hoping to send as he sought to close the final chapter of his country’s tumultuous revolution.

Oleksiy Haran, a professor at the Kyiv-Mohyla Academy, calls it “certainly a step forward.”

“In a time of crisis, [voters] trusted who was already in power,” he says. “That rarely happens.”

By Monday evening, after more than 60 percent of the votes were counted, Poroshenko’s eponymous political bloc appeared in a dead heat with its closest ally, Prime Minister Arseniy Yatsenyuk’s People’s Front, at about 21 percent.

Trailing in third place with around 11 percent was the upstart Self-Help Party, a moderate, pro-democracy group mostly hailed for its young, reformist candidates untarnished by political intrigue.

Government allies and other observers suggested the three frontrunners would form a broad, pro-European ruling coalition, leaving out the populist Radical Party — dismissed by observers for its leader’s hollow showmanship — and the Opposition Bloc, whose members are tied to disgraced pro-Russian ex-President Viktor Yanukovych’s Party of Regions.

Whatever shape the new coalition takes, experts suggest the overall results represent an important departure from the typical trend of party monopolization in Ukrainian politics.

Political consultant Taras Berezovets said they reflect a desire by Ukrainians to see a broader power-sharing alliance between political giants Poroshenko and Yatsenyuk.

But it won’t be all smooth sailing.

The Opposition Bloc is expected to receive around 10 percent of the vote, which appears to show that former Yanukovych allies — maligned for their role in approving tough anti-protest legislation last January that led to an escalation in the country’s crisis — are seeking to retain a role in the new political landscape.

Overall, around 70 deputies who voted for those so-called “dictatorship laws” look set to be reelected, according to local media reports — 15 of them from the Opposition Bloc, and the rest from single-mandate districts.

Half of parliament is chosen in voting for parties, while the other half is assembled from those single-mandate districts, an electoral system long criticized for facilitating crooked voting.

Even some 25,000 Ukrainian soldiers currently in the east were barred from voting because the previous parliament failed to pass absentee voting legislation, an embarrassing development that highlighted the old legislature’s inaction.

However, even among those who did vote, a relatively low turnout of around 52 percent pointed to a sense of political fatigue despite the elections’ poignant symbolism, says political analyst Vitaliy Bala.

“When people are discontented, they don’t come out to vote,” says Bala, head of the Agency for Situations Modeling, a think-tank in Kyiv. “This is a signal for the government to talk less and do more.”

With last winter’s bloody revolution politically complete, the new authorities will be pressured to make good on a raft of promises first offered during the street protests on Independence Square, or the “Maidan.”

Poroshenko’s group announced early Monday it would kick off the new parliament’s first session with a move to cancel immunity for lawmakers and other top officials.

That will undoubtedly bode well among voters across the board, most of whom said they went to the polls to oust a weak-willed and corrupt parliament that’s done little to meet protester demands since Yanukovych’s ouster last February.

“Until we get rid of this system — this predatory, oligarchic system — we won’t be able to do anything else,” said Volodymyr Murashko, a 60-year-old from Kyiv who voted for former Prime Minister Yulia Tymoshenko’s Fatherland Party, which fared poorly.

Experts say the government’s main priorities will be to wind down the fighting in the east, which has claimed more than 3,600 lives since last spring, as well as address a sputtering economy that could still contract up to 10 percent by the end of the year.

The question of Russia’s influence remains unclear, however, although it’s certain to continue playing a spoiler role in Ukraine’s march toward the West.

But without a significant foothold in Ukraine’s parliament — as experts say it held through Yanukovych’s Party of Regions — the Kremlin is expected to rely more heavily on the pro-Moscow separatist statelets in the Donbas as a bargaining chip against Kyiv.

Another option is to stir the pot within the ruling coalition, Haran says.

“They may try to stoke tensions between president and the prime minister,” he says, “just to create an unstable majority.”