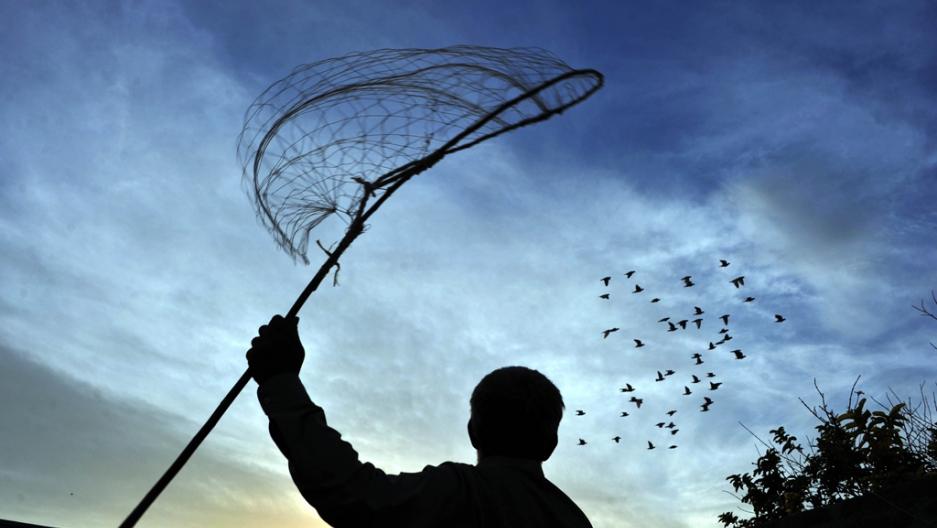 Afghan pigeon fancier Habibullah looks on as his birds take flight at his home on the outskirts of Jalalabad, Oct. 22, 2014.
Credit: Noorullah Shirzada
Share

It is also a sign of the hurdles that Afghanistan’s new president, Ashraf Ghani Ahmadzai, must overcome as he attempts to move his country forward. Those obstacles are not limited to the knee-jerk fanaticism of a few hundred protesters; the architects of this particular crisis can be found inside Ghani’s own “National Unity Government.”

The overt reason for the outpouring of negative emotion in Afghanistan last week was a small article in an obscure English language newspaper, published nearly two weeks ago and that almost no one in Afghanistan actually read.

The Afghanistan Express, which bills itself as “the voice of a more hopeful generation,” is a small publication that targets foreign embassies, NGOs, “entrepreneurs and tourists” — none of whom much resemble the protesters gathered at the Eid Gah Mosque or Kabul University on Friday.

The author, who calls himself A.J. Ahwar, is not well known in Afghan journalistic circles; he and his wife, who is also an Afghan-born journalist, are currently living in the Netherlands, where they are seeking asylum.

The article in question, “The Islam of the Taliban and ISIS,” is a cri de coeur against a God unwilling or unable to curb evil in the world.

“What type of God you are? Are you insane? … You ‘God’ are not understandable, I leave you right there alone in the sky.”

Railing against the Lord may be common for philosophy students, Dostoevsky, or even the Bible’s Book of Job.

But in Afghanistan, where just joking about the weather can be interpreted badly as questioning God’s will, such talk is tantamount to throwing a lit match into a powder keg.

The match was handily supplied by the country’s new CEO, Abdullah Abdullah, Ghani’s chief rival for the presidency. He is now trying to find his footing in a new post created specially for him in order to defuse a simmering political crisis over allegations of electoral fraud.

Chairing a session of the Council of Ministers last week, Abdullah called for the arrest and punishment of those responsible for the offending article.

Others then piled on, with powerful Islamist politician Abdul Rasul Sayyaf — most famous in the West as the man who brought Osama bin Laden to Afghanistan — calling the writer of the article a “pervert” and saying he expected the government to take strict action against the paper.

Rumors swirled all last week that 15 members of the newspaper’s staff had been arrested. Then it appeared that warrants had been issued, but no arrests made, although an Interior Ministry official said privately that some Afghanistan Express staffers had been detained and released, after the paper issued a rather clumsy apology.

On Friday, confirmation came that the editor had indeed been arrested and the newspaper’s offices closed.

After that events followed a fairly predictable course — demonstrations, calls for the author’s imprisonment or death, and outrage on Twitter, with some wondering why the US was still supporting such a retrograde country.

The case could prove a real problem for Ghani, who spent the bulk of his professional life outside Afghanistan, earning a PhD in anthropology at Columbia University before becoming a professor at Johns Hopkins and then a World Bank executive. His wife is a Lebanese-born Christian whom he met in Beirut in the 1970s, when both were students.

This raised some eyebrows when Ghani decided to run for the presidency in 2009; he renounced his American citizenship and campaigned hard, but got just 3 percent of the vote.

In 2014 he embraced his Afghan roots, grew a beard, put on a turban and attached the tribal designation “Ahmadzai” to his name.

Now he is president, but suspicions lurk in some minds that the new head of state is not sufficiently “Afghan.” Ghani has been at pains to disabuse them of that notion.

If this case gathers steam, Ghani will have to choose between promoting the “free speech” principles he espoused during his campaign and appeasing the more conservative segments of his society.

Afghanistan’s journalists have been fairly silent. After the electoral tensions, few seem eager to plunge the brand new administration into controversy.

Sediqullah Tawhidi, head of Media Watch for Nai, a local media development organization, told GlobalPost that this was not, strictly speaking, a press freedom issue.

“Freedom of speech does not mean you can say anything you like,” he said. “You cannot insult the religion or hurt people’s beliefs. This is not defensible.”

Tawhidi argued that the media and the Afghan government were actually being manipulated by the author, for his own purposes.

“This A.J. Ahwar sought asylum in Holland, along with his wife. But the authorities decided they were safe in Afghanistan. They were supposed to come home. Now he wrote this article in The Afghanistan Express to justify his claim.”

A.J. Ahwar is Ahmad Javeed Ahwar, a young Afghan who has studied abroad, bills himself as a “secular, anti-Talibanism activist” and conducts a blog called The True Pen.

He and his wife, Afghan TV presenter Marina Zaffari, have been waiting for asylum in The Netherlands for over a year.

Australian filmmaker Eva Orner, who met Zaffari when she was making a documentary about the media in Afghanistan, described the case in an article for Filmmaker Magazine. She paints Zaffari as a tireless crusader for women’s rights, an Afghan patriot who, with her husband, was forced into exile by threats and intimidation.

The pair is still in limbo.

A.J. Ahwar did not respond to requests for comment.

Blasphemy cases are nothing new in Afghanistan, and almost invariably excite international interest.

One of the most prominent was Abdul Rahman, an Afghan who converted to Christianity, only to face the death penalty for apostasy under Sharia law. Then-President Hamid Karzai found himself caught in a loophole of the Afghan constitution, which guarantees freedom of religion on the one hand, and the primacy of Islamic law on the other.

Abdul Rahman was released after Afghan officials hinted that he might be insane. He was given asylum in Italy.

Parwez Kambakhsh was also imprisoned for blasphemy after downloading materials from the internet that defamed Islam and the Prophet. He had a death sentence commuted to 20 years, and, after intense lobbying by foreign embassies, was also sent abroad.

The problem with the present case is that the perpetrator is outside the country; in his stead, his colleagues are being held accountable.

The editor’s name has not been released, and the government has not responded to repeated requests for comment.

But The Afghanistan Express itself hinted at its discomfort with the situation in a statement:

“We (The Afghanistan Express Management Team) deeply apologize for this mistake …We strongly condemn ideas and comments that were published to use this mistake for their political and individual purposes.”

Those “political and individual purposes” are still vague, but one thing is clear: Afghanistan’s new president has been handed one nasty can of worms.