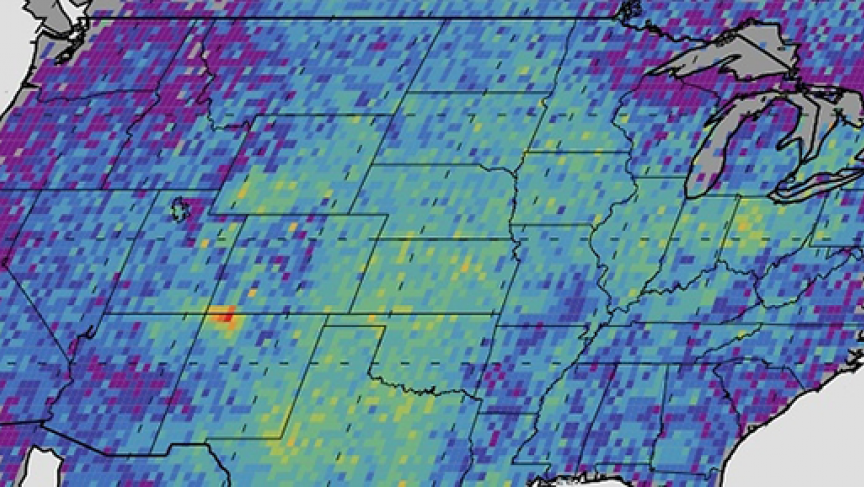 The methane hotspot in the Four Corners region is highly concentrated over a relatively small area, so it lights up much brighter than any other area in the U.S. on an image produced by the study.
Credit: NASA
Share

Scientists at NASA and the University of Michigan have used satellite data to find a huge spike in emissions of the powerful greenhouse gas, methane, over the Four Corners region of the United States.

The scientists analyzed satellite data from 2003 to 2009. A map of their results shows a bright red spot in the area where the states of Arizona, Utah, New Mexico and Colorado all meet. The results of the new study are published in the journal Geophysical Research Letters.

Christian Frankenberg, of NASA’s Jet Propulsion Laboratory and one of the study’s co-authors, says the spike in emissions is most likely related to coal bed methane extraction in the region. Four Corners became one of the biggest coal bed methane extraction areas in the US in the 1990s. “We observed the enhancements starting in 2003,” Frankenberg explains, “and at the time there was not considerable fracking activity in this area.”

The main message of the study’s results, Frankenbery says, “is that we should not only focus on the new techniques like fracking, but keep the whole energy sector in view — and not let those areas that have already been emitting methane for a long time just get swept under the carpet because all the focus is on fracking.”

The scientists collected the data from the European satellite, SCIAMACHY, using a technique called absorption spectroscopy. SCIAMACHY can record more than 8,000 different colors. The satellite recorded spectra for methane in the 1.6 micron spectra range, a range not visible to the human eye.

“With that fine spectra resolution we can basically detect ‘fingerprints’ of atmospheric trace gases,” Frankenberg explains. “We use these absorption [measurements] of methane to derive the methane quantities that are in the satellite’s field of view.”

Methane is a naturally occuring gas that makes up about 95 percent of the natural gas extracted in the US. The EPA says methane is "25 times more powerful than carbon dioxide in trapping heat in the atmosphere over a 100-year period."

Total methane emissions in the US are about 7 million metric tons per year. The emissions over Four Corners were almost ten percent of total US emissions — considerably higher than EPA estimates that rely on data from towers and airplanes.

Though remote sensing will never be as accurate as in situ measurements taken at ground level, satellite measurements are a valuable tool, Frankenberg says. Satellites use only one type of instrument to record methane levels around the globe, which makes all the “inter-calibration issues a little easier.” Satellites also give researchers full global coverage, which allows them to make observations in regions where, either for political, financial or safety reasons, they wouldn’t otherwise access.

But the biggest advantage of satellite data is the ability to locate potential hotspots like the one Frankenberg and others just observed — problem areas where scientists can then follow up with more dedicated ground-based studies to locate the actual source.