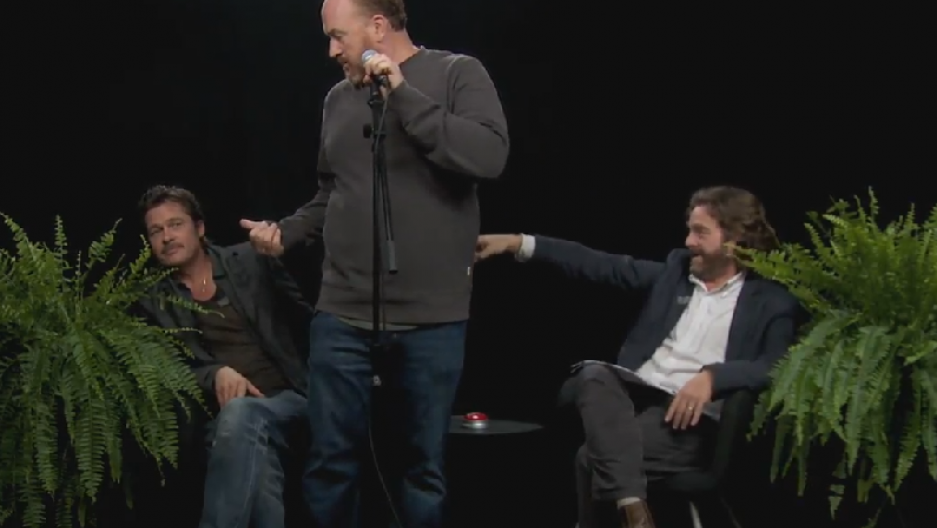 This week in "Thanks, Internet" --- NASA launches a Soundcloud, Sleater-Kinney returns, Brad Pitt gets ferned, SNL re-opens, and goats discover the power of the dark side.

NASA joined SoundCloudthis week, making a rich archive of iconic space recordings embeddable for all internetkind. The move looked like savvy socialmedia strategy until we stumbled upon the account description:

Here's a collection of NASA sounds from historic spaceflights and current missions. You can hear the roar of a space shuttle launch or Neil Armstrong's "One small step for (a) man, one giant leap for mankind" every time you get a phone call if you make our sounds your ringtone. Or, you can hear the memorable words "Houston, we've had a problem," every time you make an error on your computer.

Ringtones? Really? Put your phones on vibrate,NASA.
Thanks, Jules!

In January, Sleater-Kinney will release its first album in a decade. This week, the band dropped No Cities to Love'sfirst single, "Bury Our Friends." It's an unrelenting mission statement from Carrie Brownstein, Corin Tucker, and Janet Weiss that's sure to find a legion of fans who didn't know the band in its first life. The Halloween-ready lyric video featuring peak Miranda July doesn't hurt.

Love or hate "Between Two Ferns," you have to give it up to whoever books these segments. Most recently, Zach Galifianakis has drawn the ireofPresident Barack Obamaand spankedJustin Bieber. This week, he asks Brad Pitt about living in Angelina's shadow, reminds him about that one Friend, and has Louis CK drop by. Just because he can.

When Saturday Night Livere-vamped its opening creditsthis season -- its 40th on air, and its first without the late, lamented announcer Don Pardo -- the team decided to go big. There are aerial helicopter shots of New York City, fancy lenses, and neon signs that float midair. In the great longread "How We Did It --- SNL Title Sequence," director of photography Alex Buono reveals that some of the best tricks are remarkably lo-fi.

5. Episode X: The Return of The Goats