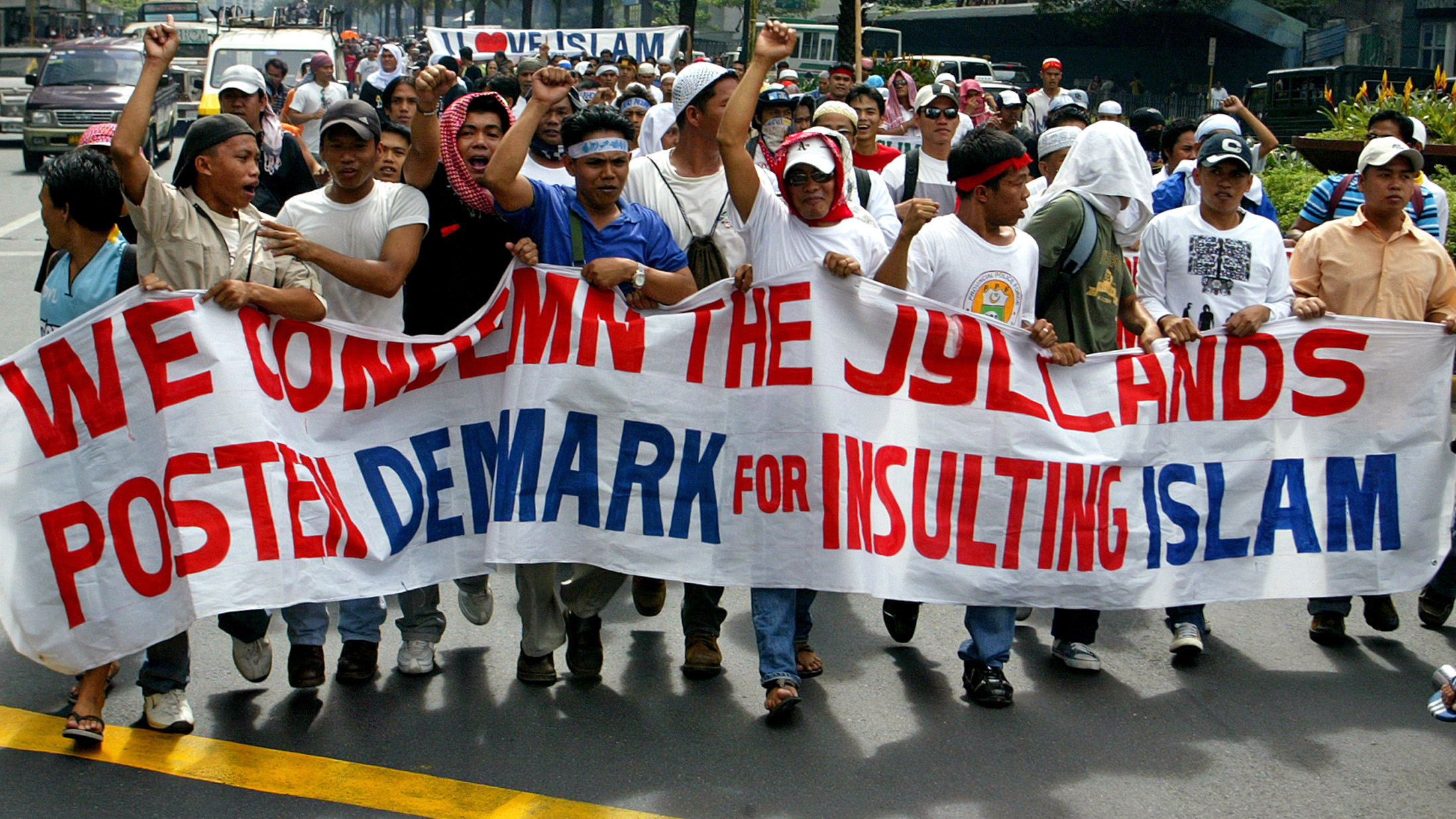 Filipino Muslims hold a banner during a rally outside the Danish embassy in Manila's Makati financial district February 15, 2006. The protesters were demonstrating against cartoons depicting the Prophet Mohammad that were published by a Danish newspaper.

Protests erupted across the Muslim world nearly a decade ago over cariacatures of the Prophet Muhammad. Depicting the prophet in any form is strictly forbidden in Islam, and the drawings, which went viral, led to demonstrations, death threats and assassination attempts on the cartoonist, Kurt Westergaard.

The cariactures, including one cartoon of Muhammad wearing a bomb in his turban, were first published in the Danish newspaper Jyllands-Posten. Flemming Rose, the editor who commissioned the cartoons, just published a book "The Tyranny of Silence" about his experience during what he calls the Cartoon Crisis.

“The sin of being offended is always in the eye of the beholder," he argues. "There’s no such thing as an image that’s offensive in and by itself."

Rose's book examines other symbols and images that have offended people throughout history.

Edouard Manet's masterpiece Olympia — the painting of a woman reclining nude and being attended to by a black housemaid — caused quite a controversy when it was first shown in a Paris salon in the 19th century. Manet had the same explosive response to his provocative work titled Luncheon on the Grass, featuring a nude woman at a picnic.

But no one flinches at the painting today while walking through the Museé d’Orsay in Paris. “They are perceived as masterpieces of world art that is not causing offense to anyone,” Rose says. “Being offended changes from culture to culture and from one time to another.”

That's not the only difference between the 19th century and 2005. The Muhammad cartoons reached an audience far wider than Manet’s portraits, thanks to the Internet. And outrage over the cartoons reverberated around the globe with incredible speed.

Not all of mainstream Denmark was behind the publishing of the cartoons at the time; many Danes saw what Jyllands-Posten did as a provocation that turned Denmark into a target. But Rose thinks the mood in Denmark has changed since the height of the protests in 2006. “More people today support the point of view of Jyllands-Posten and me than in 2006,” says Rose.

“I explain this because it’s very clear that we have a 'cartoon crisis' almost every week now in the world. This has become part of our daily life that we have these kinds of, I call it ‘insult fundamentalism’" he argues. "It’s not only to do with Islam: It’s the same with Hindu fundamentalism in India, with [the] Russian Orthodox Church in Russia; this sense of insisting on new limitation on free speech has become a worldwide trend, and I think that’s part of the reason that more people today understand that this was just not an isolated case.”

Westergaard, the artist who drew Mohammed with a bomb in his turban, became the target of two murder attempts after the cartoons were published. A Somali man actually made it into Westergaard's house in 2010 while carrying an axe and a knife.

Rose has also worried for his safety. “I do not live with bodyguards around the clock like Kurt Westergaard," he says. "But of course it has changed my life. It’s not pleasant to be called a racist — or even a Nazi — by people with whom you might sympathize on other issues."

However, he does not regret his decision to publish the cartoons. “From the point of view of an editorial decision, I think this was right,” Rose says. “I mean, this is one of the most important debates we’ve had in Denmark and in Europe in the last 10 years.”