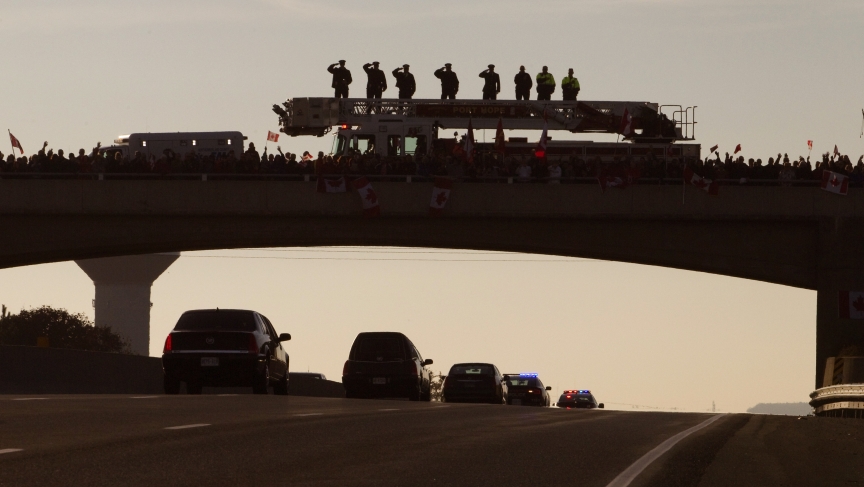 Firemen salute from the top of their truck as residents stand below them with flags on a bridge to honour Corporal Nathan Cirillo as the motorcade and hearse carrying his body passes along Highway 401, the nation's "Highway of Heroes", enroute to Hamilton, Ontario October 24, 2014.

Thousands of Canadians lined Ontario's Highway of Heroes on a Friday afternoon to pay final respects to Cpl. Nathan Cirillo, the 24-year-old reservist killed in a terrorist attack on Canada's War Memorial on Wednesday.

Cirillo was killed by Michael Zehaf-Bibeau, who shot the soldier as he stood guard over the Tomb of the Unknown Soldier, before making his way into Canada's Parliament buildings. Guards there shot and killed Zehaf-Bibeau in a shootout.

Meanwhile, we're learning about the civilian bystanders who rushed to Cirillo's side without any regard for their safety — first to try and save his life and then to comfort him in his dying moments. The National Post interviewed lawyer Barbara Winters, who was one of the ones who came to Cirillo's aid. Edit: A previous version of this story incorrectly stated the day Cirillo was killed.

All he wanted was a better life for his family

PRI's The World talked to Shukri Alassouli, one of just 11 survivors of a horrible shipwreck in the Mediterranean Sea that killed almost 440 people. In that way, Alassouli was one of the lucky few. But he was also horribly, horribly unlucky. His wife and daughter were both on the ship as well, and died in the shipwreck.

Alassouli brought his family on the ship because he was trying to flee the violence and poverty in Gaza for a better life in Europe. He'd paid smugglers thousands of dollars to bring them to Europe, only to be repeatedly passed from over-filled ship to over-filled ship before the disastrous shipwreck. And the shipwreck was no accident — an Egyptian ship rammed the refugees' boat until it sank.

Journalists and healthcare professionals have been trickling into the West African nations battling in Ebola in fits and starts. For those who get there, it can be like entering a whole other world. No one shakes hands and all other contact is discouraged. Journalist Jina Moore has been twice — and each time she goes, she says she feels more and more disconnected from the world, craving any human touch. Instead, she has to find other ways to connect with humanity.

Moore says she deliberately breaks all the rules "experts" tell westerners before they travel to the developing world. She brings candy for kids, she hands out cash to beggars, brings rubber gloves to nurses she interviews, even though they're the sources in her story. In other words, do small kindnesses. And don't, she says, think you're being generous. "Because you can’t touch anyone here, and when you are deprived of human touch, you can go a special kind of mad." She writes about her experience in BuzzFeed.

Somalia gets its first ATM

Salam Somali Bank has opened the first ATM in war-torn Somalia, operating out of the Hotel Jazeera in Mogadishu, the country's capital. And this is just the beginning, with the bank planning to open more ATMs around the capital city, revolutionizing the way people bank and do business in the country. One resident told The Guardian how marvelous this new service was, because she didn't need to worry about bank hours.

This dollar-dispensing ATM is more than just a cash machine, though. It's really of an indication of just how far the local economy has come in the months and years since the terrorist group al-Shabab was ousted from the nation's capital. At the same time, the country's first postal service has been formed. Local officials hope tourists will begin to return to the more stable country — and the new ATMs will cater to them. But The Guardian says local youth have been intrigued by the technology as well.

Scientists using space satellites have redrawn the map of climate change emitting gases over the US — in particular methane. Methane, which is 25 times more powerful than carbon dioxide in trapping heat in the atmosphere, comes from a variety of sources including animal digestion. But it also comes from extracting fossil fuels. And that's presumably the cause of a huge bloom in methane emissions over the Four Corners region of the US — where New Mexico, Arizona, Utah and Colorado meet.

Methane is a useful gas, making almost 95 percent of the natural gas that is used to heat and make water in homes across the US. And this region is home to a large mine for the extraction of coalbed methane — a somewhat controversial technique that involves pumping water out of the ground and capturing methane that leaks out with the water. This new revelation comes from scientists at the University of Michigan who hope to use their new space map to target areas for additional, more exact measurements.

The remnants of Hurricane Gonzalo, which caused $200 million in damage in Bermuda last weekend, zipped across the Atlantic before slamming into the UK early this week and then moved over southern Europe, leaving more misery in its wake. It's caused flooding in Greece and snow in Bulgaria, as well as thousands of flight cancellations across the continent. According to The Weather Channel, the storm system is expected to linger over Greece and the Balkans for several days.