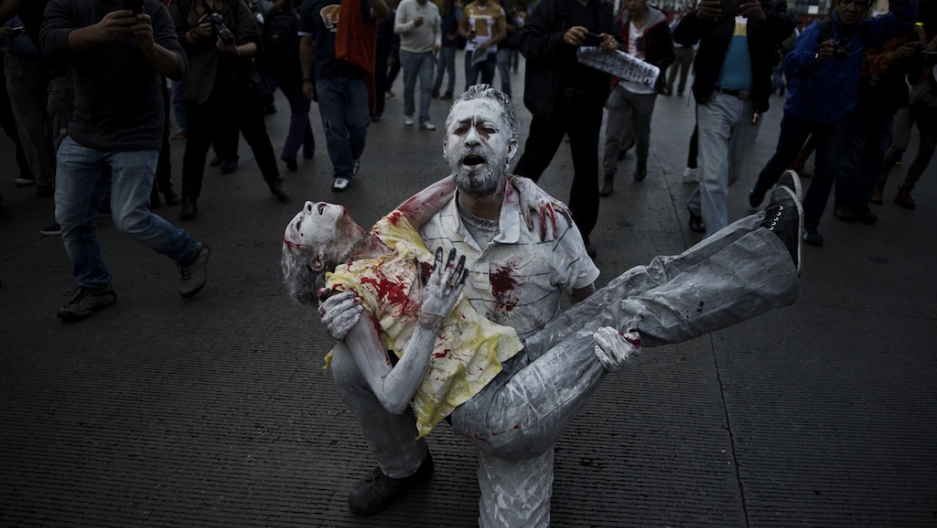 MEXICO CITY — The fathers of the disappeared students took to the stage one by one. They spoke of their sons’ hopes of becoming teachers, of the last time they saw them, of their agony in going almost a month with no news after they vanished.

As one dad described his son’s dreams, he could not hold back his tears in front of the tens of thousands of protesters in Mexico City’s central square. As he wept, the protesters shouted in his support, “You are not alone!” and, “Justice!”

The demonstration on Wednesday night was one of dozens that have been taking place across Mexico in response to the disappearance of 43 trainee teachers and the shooting death of three more by police and drug cartel gunmen on Sept. 26.

The protests have mushroomed into some of the biggest the nation has seen in years, mobilizing thousands of university and high school students while also galvanizing support from unions, vigilante groups and many others.

The case and public anger over it have become a landmark challenge for the government of President Enrique Peña Nieto, which has come under criticism for failing to find the students after four weeks.

This is a country that's endured years of a United States-backed drug war that's claimed more than 70,000 lives and left thousands of others missing.

Since coming into power in 2012, Peña Nieto has labored to sponge Mexico’s bloodstained image. But the horror of corrupt cops and narco gunmen killing teens has sent crime and corruption straight to the front pages.

“It is not possible that the government shows off its advanced technology and then can’t use it to trace and rescue the 43 students,” one father, who introduced himself as Rafael, told the crowd in Mexico City. “They must find our sons or face the consequences.” The victims were attacked by police officers and the alleged cartel gunmen in the city of Iguala in southern Guerrero state. Witnesses last saw officers bundling the disappeared into police cars.

Federal Attorney General Jesus Murillo on Wednesday said federal forces had arrested more than 80 people, including dozens of police officers and members of a drug cartel called Guerreros Unidos — Warriors United — in connection with the attack.

“Warriors United has sewn a web of complicity with several mayors and above all with security officials,” Murillo said. “In Iguala, the complicity was between the authorities, the local police and the Warriors United.”

The Iguala mayor Jose Luis Abarca and his wife are also linked to the Warriors and involved in the incident, Murillo said.

Mayor Abarca told police to go after the students because he thought they would disrupt an event in which his wife was speaking, Murillo said. The police then handed the students over to the cartel gunmen, he said.

Both the mayor and his wife are on the run.

Thousands of soldiers and police have been unable to determine exactly what happened to the students after they were given to the cartel. They have dug up a series of mass graves with at least 30 badly burned and dismembered bodies but none so far match the disappeared.

“It was a form of terror against students and this affects the whole population,” says Marco Antonio Morga, a 17-year-old high school student marching in Mexico City. “These crimes are a worry to us all. We have to show solidarity.”

The Wednesday night demonstration attracted what appeared to be more than 100,000 people — a surprisingly large number for a midweek event. On Thursday, students also blocked major roads across the capital, snarling up traffic.

While the capital city’s protests have been peaceful, demonstrators in Guerrero state have smashed and burned several buildings, including the Iguala mayor’s offices, and have occupied town halls and radio stations.

Two different armed cartel-fighting vigilante groups that operate in Guerrero have supported the protests, while a local leftist guerrilla group has also promised to avenge the students.

As well as criticizing Peña Nieto, protesters are furious with the leftist Democratic Revolution Party or PRD, which runs Guerrero state and the town of Iguala.

Demonstrators along with many senators and deputies called for the resignation of Guerrero Gov. Angel Aguirre, and on Thursday night he finally said he was throwing in the towel.

“To create a favorable political climate and to find a solution to these problems … I have decided to ask the honorable state congress for my leave,” a shaken Aguirre said.

However, protesters are angry with politicians across the board. When PRD founder Cuauhtemoc Cardenas joined one march, demonstrators threw bottles at him until he escaped in a car. Meanwhile, many carried placards calling for Peña Nieto to resign.

The marches have coincided with other student protests adding to the pressure on the president.

Students at Mexico’s technical colleges have been taking over campuses in protest against a change in their courses that would downgrade them to technicians instead of engineers. They see this as a ploy to pay them less as the president looks for a bigger role for foreign companies in Mexico’s energy and other sectors.

Meanwhile, students in Guanajuato state marched on Thursday after a classmate was murdered. Witnesses claim he had been taken by police officers although a state prosecutor denied this.

“There is a lot of anger that has been building up over different issues,” said school teacher Ricardo Rivas, marching in Mexico City. “Once the anger is unleashed it could shake this country up. These protests could become much bigger.”