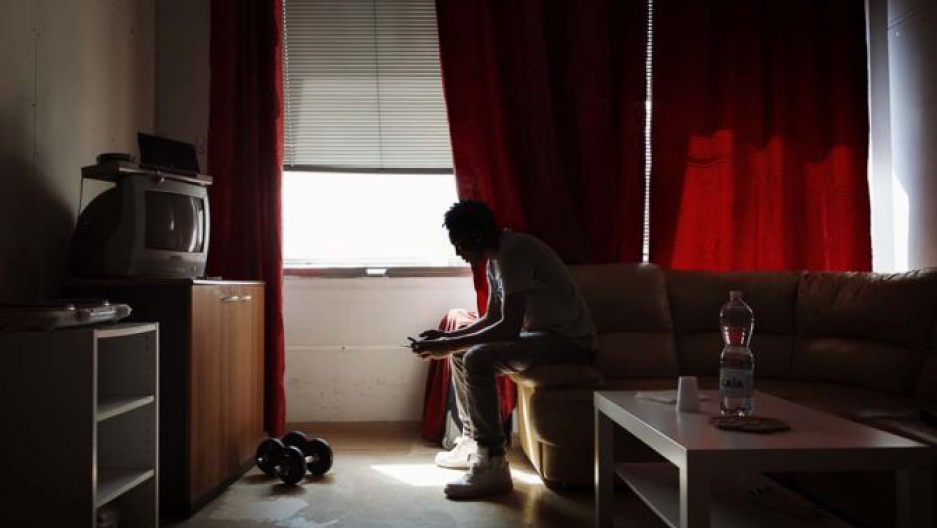 ROME -- Abraham, 25, and unemployed, peers at his cell phone. He is one of millions of millennials around the world who are struggling to find work in a weakened global economy.
Credit: Chris Livesay
Share

NEW YORK — After a year-long reporting effort by The GroundTruth Project, a clearer picture is emerging of a millennial generation facing an uncertain global economy.

Our team of 21 GroundTruth reporting fellows journeyed to 11 countries to tell the story of their own generation. It’s a complex picture which combines devastating realities for many young people who economists believe will be the first generation to be worse off than their parents.

But it is also a demographic group, typically defined as being born between 1980 and 2004, that holds out great promise for innovation and an entrepreneurial spirit that seems woven into their identity as digital natives. And this generation is actively, some might say desperately, being courted by President Obama as the swing vote in American electoral politics.

This year, it seems the world has begun to realize that a large piece of the millennial generation has suffered the consequences of an increasingly unequal global economy that has fostered despair and in many places, from Brazil’s street protests to the uprisings of the Arab Spring, violent expressions of dissatisfaction.

In Brazil, they mobilized to boycott the World Cup, accusing the government of squandering their future to host wealthy tourists rather than create opportunities for the country’s residents.

In Spain, they are known by the Spanish-language shorthand “NiNis” because they’re neither working nor in school in a country with a youth unemployment rate above 50 percent.

In the Philippines, which has one of the youngest populations in the world, a small cohort are fighting over jobs at call centers in a  booming ‘outsourcing’ sector while a much larger number slipping deeper into poverty.

In Nigeria, young people represented a “kidnapped generation” long before Boko Haram abducted 270 schoolgirls in April as a seemingly indifferent government was shamed on the world stage by the #BringBackOurGirls campaign.

In Egypt, the young people who inspired what became known as a “Facebook Revolution” that toppled a dictator are redirecting their energies to building technology startups out in the desert, defying a sinking economy in an increasingly authoritarian political climate.

In America, young people living in the country’s former industrial heartland are finding jobs are scarce while an innovation economy is creating a thriving culture of digital startups on the coasts.

If there is one truth that cuts across the different cultures and histories of the countries where our young reporters went to find stories, it is that the problem is global and rising in its urgency.

GroundTruth Managing Editor Kevin Grant, who has headed up these reporting teams in the field, said, “Our reporting revealed that youth unemployment has remarkably similar effects on societies around the world. When the future looks so bleak, it's very difficult for young people to feel like they are part of something that matters. The mundane tasks of seeking a job can feel like a waste of energy when there is so little payoff. That has led many millennials to organize, to lash out and in some cases, to give up altogether.”

But Grant hastened to add that while there is frustration there are also streaks of hope and innovation in a generation that, as President Obama put it in a recent policy speech on millennials, has “an entrepreneurial spirit in its DNA.”

 Research shows the youth unemployment crisis is not limited to any particular country or region. It is no kinder to developed nations than to developing ones. Catastrophic levels of youth unemployment have emerged since the global economic downturn began in 2008 as a sort of plague on a “lost generation,” with powerful implications for the planet.

And what is increasingly clear is that we are all in this together. If this generation continues to stumble, the economy will fall.

A research report by the Young Invincibles, a post-recession youth advocacy group, found that persistently high unemployment among young people accounts for up to $25 billion a year in uncollected tax revenue and additional strains on existing funding for social services.

Rory O’Sullivan, the director of the advocacy group and co-author of the report titled “In This Together,” explained, “When you have an entire generation of people that are out of work, it’s going to create tremendous costs for taxpayers both now and in the future.”

The report also highlights the fact that federal youth jobs programs have been cut by $1 billion a year since 2002, and it calls for the Labor Department to expand apprenticeship programs and national service programs such as AmeriCorps, which had 500,000 applications last year for just 80,000 positions.

The World Economic Forum, which focused on the problem at its gathering in Davos in January, has emphasized the need for an entrepreneurial, “collective approach” to the problem to better match open positions with potential employees with required skills, providing training and mentorship programs to those who might be otherwise unemployable.

And the European Union has committed to an initiative that “seeks to ensure that member states offer all young people up to age 25 a  quality job, continued education, an apprenticeship or a traineeship within four months of leaving formal education or becoming unemployed.”

As London-based economist Umair Haque, a frequent contributor to the Harvard Business Review, wrote in January, “So let’s call it what it is. Not just unfair — but unconscionable. The world’s so- called leaders have more or less abandoned this generation.”

As a culmination of our year-long reporting effort, The GroundTruth Project and International House are co-hosting a conference titled “Generation Jobless” that is a gathering of thought leaders, politicians, economists, advocates and talented young people to work together to find solutions to the problem. We hope our reporting around the world on this issue will provide a framework for understanding the complexity and the layering of the economic realities for young people today.

As our own Kevin Grant put it, “We coined the concept of 'Generation TBD' to describe a large and often neglected demographic whose future is 'to be determined.' The uncertainty in that can be awful, the lack of trust in traditional institutions as some of the old paths to success disappear. But there is also freedom in not knowing what the future will look like, in forging new paths, and in taking it upon yourself to make the future you've been dreaming of. Our reporters say that seeing that process firsthand has been the most inspiring part of this project. I certainly feel the same way.”

This post is part of a series produced by The GroundTruth Project, presented in partnership with The Huffington Post and International House in conjunction with the Generation Jobless conference (Oct. 24-25, New York City). The event is a solutions-based conference, offering viable, real-world solutions to remedy the critical issue of global youth unemployment. For more information on the conference, read here. And to follow the conversation on Twitter, look for the hashtag #gentbd.