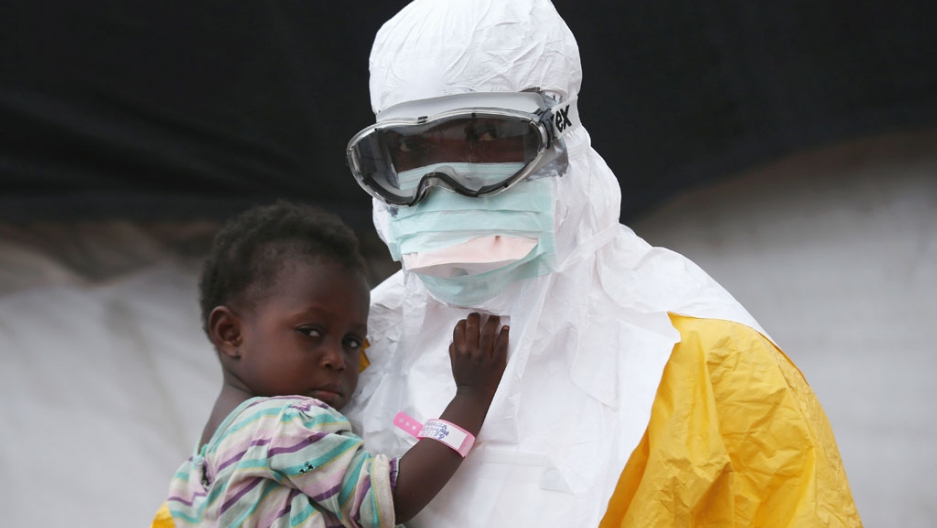 A Doctors Without Borders health worker in protective clothing holds a child suspected of having Ebola in the MSF treatment center on Oct. 5, 2014 in Paynesville, Liberia.
Credit: John Moore
Share

Medical workers are struggling to contain the worst Ebola outbreak in history, with the death toll from the virus nearing 5,000 and the World Health Organization warning that the number of new cases a week could reach 10,000 in the next two months.

As the virus spreads overseas, experts are turning to so-called "big data" to bring the epidemic under control.

Mobile phone calls, airline bookings, tweets, field reports, government announcements and population statistics are among the vast amount of information being collected, filtered and analyzed by sophisticated computer software tools around the world.

The information is enabling data mining experts to predict where the virus could be headed next and how many people are likely to be infected.

While many people are deeply suspicious about data collection — you can hardly blame them after Edward Snowden's revelations about the US government's mass surveillance of Americans' telephone and email communications — it could be critical to containing Ebola.

The intelligence gathered from scanning the internet and cell phone data is helping governments and health agencies in West Africa respond more quickly and effectively to the crisis. They can potentially spot new outbreaks, identify areas at risk and deploy resources to areas where they are most needed.

Swedish non-profit organization Flowminder has been using cell phone data to map population movements in West Africa. This is helping authorities estimate where the Ebola virus could appear next.

In Senegal, for example, local cell phone carrier Orange Telecom supplied Flowminder with data from 150,000 handsets, which it was able to use to develop maps of travel patterns in the region and help the government and health agencies anticipate the trajectory of the virus. The data had been stripped of information that could identify the user.

“If there are outbreaks in other countries, this might tell what places connected to the outbreak location might be at increased risk of new outbreaks,” Linus Bengtsson, cofounder of Flowminder, said.

Closer to home there is HealthMap, an infectious diseases tracking system developed by a team at the Boston Children’s Hospital in 2006. The creators of the map have been praised for raising the alarm about Ebola days before the World Health Organization officially announced the outbreak.

The system uses computer algorithms to scan thousands of websites, such as news, social media and government websites, for mentions of infectious disease outbreaks around the world. It then slices and dices the data into an easy-to-digest format, such as maps and graphs.

During the Ebola crisis, HealthMap has been using data from the World Health Organization to show when and where people died from the virus. It has also modeled the spread of the outbreak in Guinea, Liberia and Sierra Leone, which have been hardest hit by the epidemic, and estimated the number of future cases.

At Northeastern, computer and health sciences professor Alessandro Vespignani and his team at MoBS Lab have developed a computer model that is designed to predict the path of Ebola.

The system creates a “synthetic world” using a wide range of data, including the distribution of the population, demographics and air travel, and then adds a “few infected people” to predict how many more will be felled and where, Vespignani said.

Based on the data they have gathered so far, which Vespignani said is limited by West Africa's weak health care system and under reporting of Ebola cases, the countries at the highest risk of infections in the coming four to six weeks include France, Belgium, the UK and “many countries in the African region."

But Vespignani emphasized that he is predicting only a handful of cases in those countries, not a huge outbreak like in West Africa.

Special software that enables disaster relief agencies to send text messages en masse is also helping raise awareness about the highly contagious virus among affected populations and get much-needed information from remote regions back to governments and agencies still struggling to get a grip on the escalating crisis.

In Sierra Leone, the International Federation of Red Cross and Red Crescent Societies has been using a text messaging system called Trilogy Emergency Relief Application (TERA) to send alerts and advice about Ebola to people living in a specific region.

To work, TERA requires local cell phone network operators to install the software in their network. Once installed, TERA can detect which handsets are switched on and which cell towers they are connected to. The TERA operator then selects a region on a map and sends text messages to cell phones in that zone.

#IFRC shows how #telcos can use #TERA to fight #Ebola http://t.co/HkkKHJy4dn pic.twitter.com/XKSUygw5dM

“It's been doing an excellent job in Sierra Leone, sending out in the region of two million messages per month, helping the communities there to prepare themselves, try to avoid getting infected, and then if they do, to know what to do about it," Robin Burton from the IFRC told the BBC.

“Unlike TV and radio, if we send them a text message it's retained on the phone."

The BBC has also launched an English and French language public health information service on WhatsApp in West Africa to keep users up to date about the virus.

Experts acknowledge that sophisticated computer algorithms and models alone won't win the battle against Ebola. It will require many more highly trained doctors and nurses on the ground and stronger health care systems, which are sorely lacking in the impoverished region. But big data analytics can help bring the outbreak under control.

"(Big data) can be a high level guide to case tracking, but ultimately you have to get to the specific person (with the virus),”said Andrew Schroeder, director of research and analysis at Direct Relief, a California-based nonprofit organization that has been sending medical supplies to countries affected by the Ebola epidemic.

“It’s not good enough to know in general terms where people are moving. You have to find that guy and interview him and make sure you know what his symptoms are.

“That level of needle in the haystack phenomenon is just not something that we have a big data answer for.”