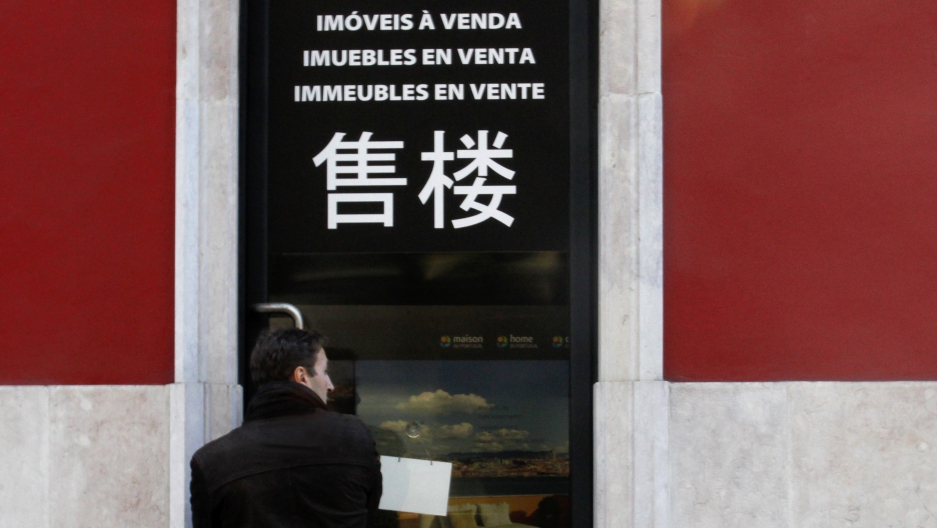 LISBON, Portugal — Billboards showing alluring pictures of seaside villas and luxury apartments have become a common sight here, which wouldn’t seem unusual except for the accompanying text — written not in Portuguese, but Chinese characters.

That’s because Chinese investors have been first in line to take advantage of a government scheme designed to help finally pull Portugal out the euro zone debt crisis by offering European Union residency visas to foreigners who invest at least $638,000 in property here.

The program has already injected more than $1.15 billion into Portugal's ailing real estate market since its launch in 2012, with Chinese citizens claiming 80 percent of the over 1,500 "golden visas" handed out so far.

More than a simple search for investment bargains, the millionaires' rush to grab prime Atlantic and Mediterranean beachfront is evidence of a major Chinese investment pivot to Europe, part of a globalization of China’s financial industry.

Here in southern Europe, the Chinese are using some of their vast currency reserves to snap up bargains from crisis-hit countries forced to sell off state companies, and to make some savvy purchases among technology leaders and global brands.

European leaders anxious for capital to boost the region's stagnant economy have been loath to bother Chinese investors with pesky US-style concerns about dependency, national security or industrial espionage.

"At this moment, Chinese investors are really paying attention to our country, and we are very happy about that," Italian Prime Minister Matteo Renzi said in Milan last week, just after inking trade deals worth more than $10 billion with his Chinese counterpart Li Keqiang.

That’s raising concerns that some European governments are too eager for short-term gains at the expense of their countries’ future security.

Chinese investment in Europe quadrupled from 2010-2012 at the height of the euro zone crisis, according to a report released by Deutsche Bank in July.

In 2010, China's $7.8 billion stock holdings in the EU were less than those of Nigeria or Iceland, the report showed. Two years later, it had risen to $34.1 billion, overtaking the likes of Mexico and South Korea.

Although the rate of investment slowed last year, there are signs the Chinese buy-up of European assets is picking up pace again.

In Italy, the $3.8 billion China is estimated to have invested so far this year is more than double the total for the past three years.

Fosun also looks poised to wrap up its pursuit of Club Med, after the French vacation group’s board backed the Chinese bid valuing the company at $1 billion.

Despite the current surge, Chinese spending in Europe is still dwarfed by the flow in the other direction. EU investment in China reached almost $150 billion in 2012, but the gap is narrowing.

China’s investments in Europe are motivated by more than simply a desire to seize opportunities thrown up by the euro zone crisis. The Chinese know they must diversify their assets and can’t afford to leave a $3.9 trillion horde of foreign currency reserves — the world's largest — just lying around.

"China needs to invest because it has such a surplus of reserves that depend on currency values and if they go down, they lose out," says Gauri Khandekar, head of the Asia-Europe program at the Madrid-based think tank FRIDE.

That means looking beyond China’s traditional focus on African raw materials and the US market, where Chinese companies have been squeezed by lawmakers' security concerns.

"China sees Europe as a safe investment destination, but there is also a geopolitical aspect to this, Chinese investments in the US have decreased slightly and those have been transferred to Europe," Khandekar said by phone. "There is a rebalancing of where China invests. ... China is investing its reserves strategically."

Chinese investment in Europe could get a further boost from negotiations for an investment treaty that Li and EU leaders agreed to speed up during the Chinese leader's visit to Milan last week.

Such an agreement could ease the concerns of Chinese business leaders who complain of high costs and bureaucratic barriers holding back investment in Europe, according to a survey published last year by the EU Chamber of Commerce in China.

On the plus side, the survey found, "the EU is perceived by Chinese enterprises as a stable investment environment with advanced technologies, skilled labor and a transparent legal environment ... in addition it is regarded as a relatively open market, with few market access barriers and little history of opposition to Chinese investments on national security grounds."

The last point is raising concerns thanks to the nature of some Chinese investments in the EU.

In Portugal, China's firms secured a slice of the privatized power provider Energias de Portugal and 25 percent of the company that runs the electricity grid and gas pipeline network.

Chinese companies are frontrunners to expand their interests in the Greek transport network ahead of the planned privatization of seaports, airports and railroads.

Huwei, the Chinese telecoms company, faces severe restrictions in the US because of security concerns. But it’s welcomed in Europe, where it enjoyed sales of $4.7 billion last year and is planning to almost double its local workforce of 7,500.

Could China's economic power give it political leverage over European countries?

There are worries that state-run Chinese companies may function as the Communist government’s foreign policy tools rather than in their own interests as commercial enterprises, and that China's troubled record on export controls could result in sensitive European technologies ending up in the wrong hands.

More from GlobalPost: Ebola hits home in Britain even with no victims

Many in the business world who say these concerns are overblown believe the benefits of Chinese investment outweigh any risks.

"It's clear Chinese investment is helping Portugal out of the crisis," says Joao Marques da Cruz, president of the Portuguese-Chinese Chamber of Commerce and executive director of Energias de Portugal, which has been 21 percent owned by the China Three Gorges power company since 2011.

"It would be a contradiction to welcome an investment, then admit there are sovereignty or security issues," he told GlobalPost.

"That said, any government should create regulatory mechanisms that are stable, reliable and investor-friendly, while defending the state's legitimate strategic interests,” he added. “This should be a generic issue, not discriminatory against Chinese investment."