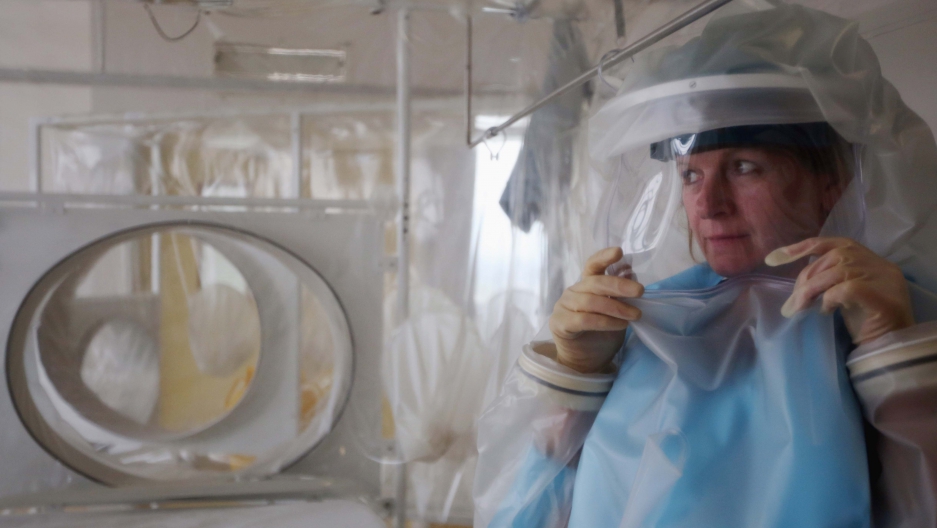 LONDON, UK — Javid Abdelmoneim returned from Sierra Leone so recently that he still advises people not to shake his hand, for their own peace of mind, until after the three-week incubation period for the Ebola virus has passed.

At London’s Royal Society of Medicine one night, the doctor with the medical charity Medecins Sans Frontieres displayed a slideshow of photos taken at MSF’s emergency clinic for Ebola patients in eastern Sierra Leone. Images showed a chart noting how many orphaned children each dead patient left behind; a whiteboard list of referrals to the mental health clinic showed a scribbled note next to one patient’s number: “child died today.”

Abdelmoneim was speaking as part of a recruitment drive organized by SLWT, a network of Sierra Leonean expatriates in Britain that’s helping find the estimated 600 to 1,000 foreign health workers needed to supplement local staff in the country’s emergency Ebola clinics.

The current outbreak, which the World Health Organization called “the most severe, acute health emergency seen in modern times,” has infected nearly 10,000 people and killed more than 4,500, primarily in Sierra Leone, Liberia and Guinea.

For those with personal ties to the stricken countries, the news is particularly painful.

“You feel kind of helpless,” said Anifa Cole, 48, a social worker from Sierra Leone who’s lived in the UK for 13 years. “There must be something you can do, even from a distance.”

Britain is sending $200 million in aid and 100 army medics to Sierra Leone to help with the crisis.

But it’s been criticized for waiting too long to respond to the unfolding emergency and exacerbating the economic devastation the disease is causing.

Many airlines have suspended flights to Ebola-stricken countries. In August, British Airways canceled all flights to Liberia and Sierra Leone through the end of this year.

Relief agencies say the airline’s decision has hampered their efforts to deliver aid and could cause needless panic in affected countries.

“We were just beginning to lift our heads above the parapet,” Cole said, referring to Sierra Leone’s recovery from a decade-long civil war that ended in 2002. “For this to happen now … how long is this setback going to last?”

The only known case of Ebola on British soil during the current outbreak was a British nurse who contracted the virus in Sierra Leone and was airlifted back to the UK in August for treatment. William Pooley, 29, made a full recovery and returned to Sierra Leone last week.

Since the outbreak first attracted attention, the authorities have sometimes struggled to strike the right balance between prudence and alarmism.

At Heathrow Airport, the world’s busiest international air hub, and Gatwick Airport, immigration officials are taking temperatures and questioning passengers from Sierra Leone, Guinea and Liberia. Similar precautions will soon be in place at the Eurostar rail terminal in London and other regional airports.

Health screeners at Heathrow were criticized after some were spotted shaking hands with passengers from affected countries.

The public health department, Public Health England, initially said shaking hands posed no risks because the virus is spread only via bodily fluids. It revised its position days later: For the moment, the hand-shaking ban stands.

“Ebola virus disease is not spread through intact skin, or by ordinary social contact, such as shaking hands or sitting next to someone,” the department said in a statement many here found confusing. “However, we have advised PHE staff responsible for screening people from countries with endemic Ebola to not shake their hands.”

At one south England hospital, an emergency room patient with a fever was placed in isolation this weekend after he revealed he’d recently returned from Africa.

Officials relaxed when tests showed he wasn’t carrying the virus and hadn’t visited any countries where Ebola is actually present.

Now officials believe it’s a question of when, not if, Ebola will reach here again.

"We will see someone with Ebola arriving in the UK,” Health Secretary Jeremy Hunt told reporters earlier this month, “and the chief medical officer thinks it will be a handful of cases in the next three months.”