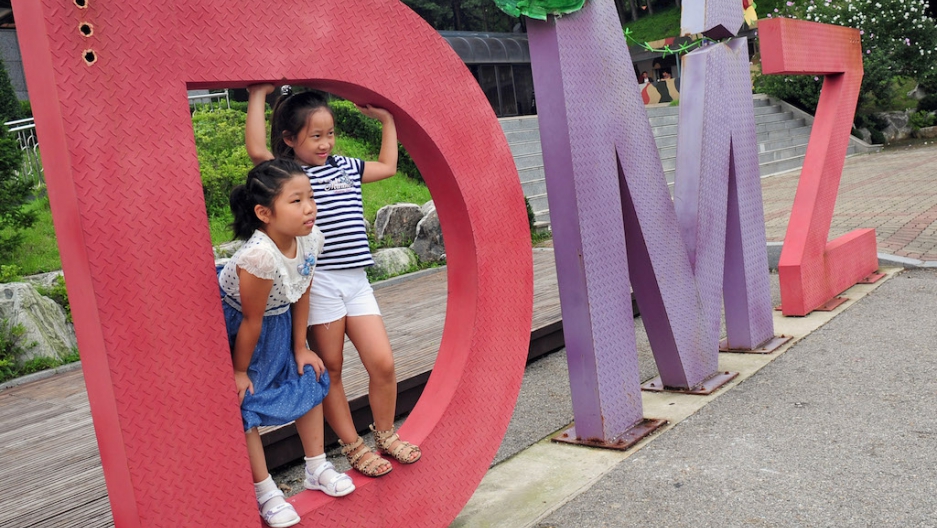 It is at this border between North and South that the legacy of the 1950 to 1953 Korean War — which never resulted in a peace treaty — remains tense. It’s the tangible remnant of a “forgotten war” in which more than 2 million civilians died.

On Sunday, South Korea fired warning shots at North Korean soldiers provocatively advancing toward the demarcation line. The North angrily blamed Seoul for the incident, claiming that the troops were on a routine patrol. That was the second time this month that forces used their weapons. On Oct. 10, Kim Jong Un’s troops open fired on balloons carrying propaganda leaflets, set aloft by anti-regime activists. Though such hostilities occasionally bring tragedy, no one was wounded in either incident.

Casualties or not, the DMZ remains a painful reality for both sides, especially for older generations whose families were separated by the Korean War. Many South Koreans see it as a reminder of the sorrows of conflict. The North Korean regime, which stakes its existence on an unending state of military emergency, views the national division as the ultimate betrayal of Koreans to the supposed empire-building of the US.

With decades of minimal human activity, the world’s most fortified border — with its diverse plains, hills, swamps and prairies — has ironically emerged as a vast wildlife refuge with few equivalents, home to a variety of endangered cranes, Siberian tigers and black bears, among others.

In the latest of a raft of state rebranding campaigns, South Korea’s President Park Geun-hye is pushing for the construction of a “Peace Park” smack in the middle of the DMZ, part of a trust-building strategy that she calls "Trustpolitik."

Park hopes her park will someday be a first step toward tossing out historical baggage. “By making the Demilitarized Zone a symbol of peace, we can erase the memories of war and provocations, and create a new beginning of trust, cooperation and unity on the Korean Peninsula,” the president said in a speech in August.

The $28.7 million project would require an unusual degree of cooperation from a finicky regime, along with support from the United Nations Command, which has DMZ jurisdiction. Thanks to widespread skepticism, the South Korean parliament has so far declined to earmark the requested budget.

This isn’t the first ambitious plan to overhaul the DMZ. Under the previous administration in 2012, South Korea rebranded parts of the perilous border with a new name, the “Peace and Life Zone (PLZ)".

Few visitors actually use the PLZ moniker, but in many areas, the state-concocted title lives up to the hype. Here in the Cheorwon Basin, a grain-basket region on the eastern side of the DMZ, tourists can observe flocks of rare migratory birds lingering near one of the Korean War’s bloodiest battlefields. “Yes, the DMZ is tense and there can be fighting. But this war has also given us a source of beauty,” asserts a nearby South Korean army guard, pointing to the cranes on a pristine shimmering lake.

The government is also looking into constructing an industrial park for eco-friendly South Korean companies, potentially offering them cheap North Korean labor. In other areas of the DMZ, there are early plans to erect a “world peace culture town” and ecological park.

One industrial zone already set up on the North Korean side of the border, the Kaesong Industrial Complex, has long trucked in cheap North Korean laborers to work in South Korean factories. But it’s long taken the brunt of inter-Korean frictions, with operations occasionally halted or slowed down when tensions flare.

Critics question whether a peace park should even be entertained until more pressing matters are addressed. Former North Korean dictator Kim Jong Il declined a similar proposal from the former South Korean president in 2007, citing ongoing security concerns, according to a transcript of the rare meeting that was leaked last year.

“I guess it doesn’t hurt to go through these rhetorical motions, but it’s basically just that — rhetoric,” said Robert Kelly, political science professor at Busan National University in South Korea. “Until North Korea really changes, calling the DMZ a ‘peace park’ is a pleasant fiction.”

“Maybe renaming it would help rebrand Korea,” he said. “But that too is rhetoric.”