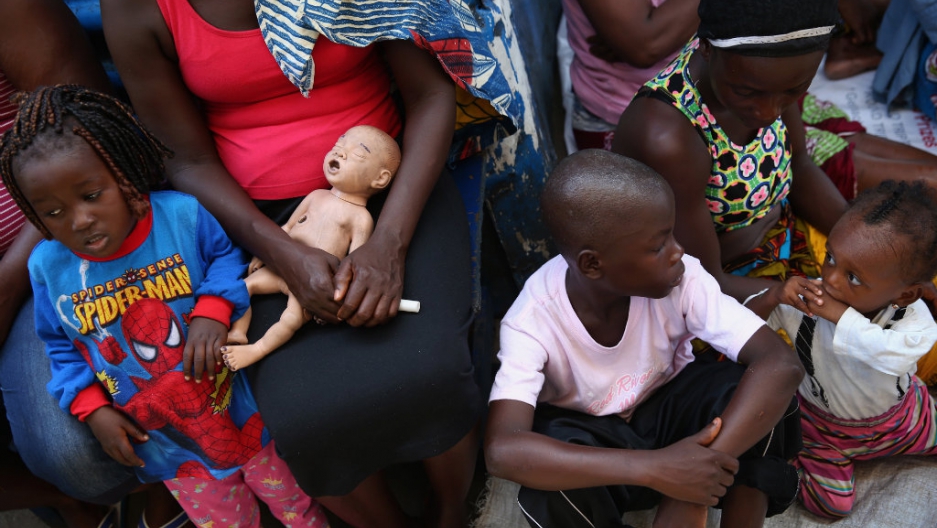 Family members gather outside a home in the West Point neighborhood where a man's dead body awaited the arrival of an Ebola burial team to take him for cremation on Oct. 17 in Monrovia, Liberia. The World Health Organization says that more than 4,500 people have died due to the Ebola epidemic in West Africa with a 70 percent mortality rate for those infected with the virus.
Credit: John Moore
Share

WASHINGTON — As the United States military heads to Liberia to aid in the fight against Ebola, officials should not overlook an unlikely but potentially powerful ally: the rubber tappers who help make their tires.

It may seem an unlikely alliance to have a union of rubber tappers — some of the poorest people in the world — helping the US military and international relief organizations. But they have two invaluable assets: the trust of the local population and the potential to continue supporting programs the relief agencies put in place.

They are making significant contributions even as the disease poses an increasing threat to community leaders and their families.

The leading union of rubber tappers — Firestone Agricultural Workers Union of Liberia (FAWUL) — is one example of local initiatives. It has mobilized its 6,500 members to help with prevention and detection in and around the Firestone Natural Rubber Company’s Liberia operation, the largest single natural rubber operation in the world.

Media reports credit the company for its precision handling of Ebola cases on the plantation, but such reports only tell half the story. The union is also mobilizing outreach and education in the working communities surrounding the plantation, where the virus has already claimed more than 24 lives.

Government attempts at quarantine will be difficult to manage in rural communities, so prevention strategies must engage community leaders.

With help from the United Steel Workers, FAWUL established a call-in radio show that reaches 75,000 people in four counties and a process for routinely surveying member opinions.

For months, FAWUL leaders have been educating their members and the surrounding community about Ebola and preventive measures, working to detect any possible cases developing in their communities.

FAWUL is now dedicating all airtime on its broadcasting system FM 105.5 (Stone Radio) to talk about Ebola prevention and urging members to spread awareness messages throughout the plantation.

The group is mobilizing 175 leaders to work with the County Health Team in order to distribute simple but urgently needed supplies, such as chlorine, soap, hand sanitizer and educational posters. FAWUL also encourages community leaders to report suspected cases and trace contacts. This kind of community education, built on years of trust building, will now be critical to convincing people to help break the transmission chain in order to curtail the virus.

More support is needed, however, so that the efforts of FAWUL and similar organizations can have greater impact. What they bring to the fight is more than just local manpower; they have built trust within their communities — an invaluable resource that the international aid community should not overlook.

Clearly, the US military has tremendous organizing capacity of its own and some of the bravest, most competent emergency response personnel to be found anywhere.

While the US military is well equipped to handle mass casualties and while President Obama mobilizes the international aid community and the big players prepare to intervene, there remains a need to find ways to build community trust and strengthen local health infrastructure. Rallying local leaders will be critical to that process.

Judy Gearhart is executive director of the International Labor Rights Forum, a human rights advocacy NGO that works globally to ensure workers’ rights. She is a Ford Foundation Public Voices Fellow with the OpEd Project. Contact her at judy@ilrf.org.