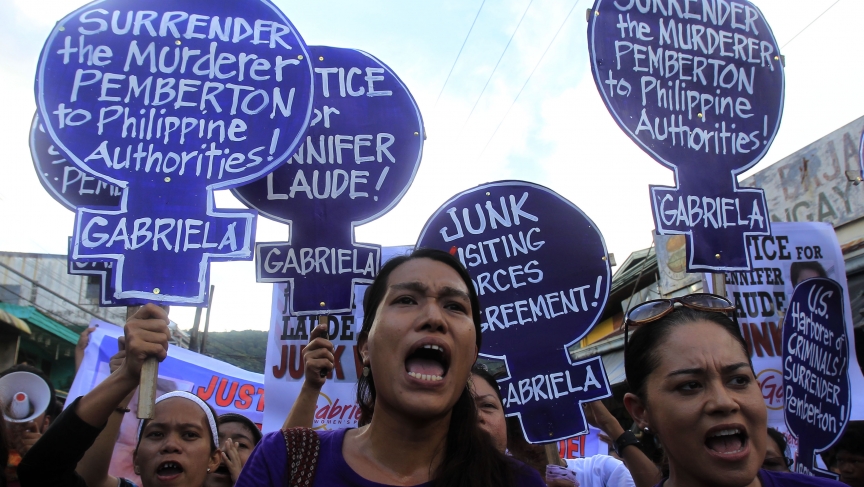 Members of the Gabriela Women's Party, a group advocating the rights of Filipino women, shout "Justice for slain transgender Jennifer Laude" during a protest in Olongapo City, north of Manila, on October 21, 2014.

The death of a transgender Filipina woman, allegedly at the hands of a US Marine, has unleashed a flood of outrage in the Philippines and raised questions about the benefits of military agreements with the US.

Reports say that Jennifer Laude drowned on October 11 after leaving a disco bar with a US serviceman. At 11:30 p.m., less than an hour after the pair checked into a hotel across the street, Laude's body was found. There were signs her face was pushed down the toilet bowl, leaving injuries and lacerations on her head and neck.

Kapederasyon, an LGBT organization in the Philippines, condemned Laude's killing and expressed alarm that the crime was possibly linked to her transgender identity:

Hate crimes have been a persistent nightmare of the LGBT sector. Every day, hundreds of our kapederasyon are subjected to hate speech, discrimination, and violence. We are victimized physically, emotionally, and psychologically amidst the backdrop of the prevailing patriarchal and “macho” culture.

PFC Joseph Scott Pemberton, the Marine suspected of killing Laude, is one of more than 3,000 Americans currently in the Philippines as part of the Philippine Amphibious Landing Exercise, or PHIBLEX. The Americans are stationed on board the USS Peleliu and the USS Germantown, which docked in the country last month.

Laude’s sister, Marilou Laude, is demanding that the US ships, which are on port call in Subic Bay following the exercise, be prevented from leaving to allow a full investigation.

But local police say the Visting Forces Agreement between the US and the Philippines has limited their authority to investigate US servicemen involved in crimes. The VFA states that custody over US troops charged with violating Philippine laws “shall immediately reside with US military authorities.” But the Philippine government may request a handover of custody, and reportedly served a subpoena for Pemberton on Friday.

Pemberton is reportedly detained aboard USS Peleliu, and the US Naval Criminal Investigative Service is said to be investigating the crime. Veteran journalist Ellen Torsedillas writes that US custody over Pemberton denigrates Philippine sovereignty:

The DFA [Department of Foreign Affairs] and the AFP [Armed Forces of the Philippines] chief’s subservient stance on U.S. custody over Pemberton denigrates Philippine sovereignty – the supreme right of the state to command obedience within its territory.

With a diminished sovereignty, what does that make of the Philippines?

Judy Taguiwalo, a former University of the Philippines faculty regent and women's rights activist, compared the country’s situation to the Cold War days when US military bases at Subic Bay and Clark Air Base were still in operation:

Nothing has changed since American soldiers killed Filipinos and considered them wild pigs so powerfully depicted in Nora Aunor's film “Minsa'y Isang Gamu-Gamo” [Once a Moth]. The sorry excuse that is the so-called Philippine government instead of asserting our right to have custody of the Marine who violated our kabaro and our laws justifies the continued custody of the suspect by the Americans!

It was Gloria Arroyo [former president of the Philippines 2001-2010] leading the Malacañang [presidential palace] at that time, and [she] turned over Smith’s custody to the Americans. Now we have BS Aquino who’s much less ballsy than Arroyo. I don’t think he’d even try to assert our right to the custody of whoever killed Jennifer, much less fight tooth and nail to convict him. No Filipino leader in my lifetime has ever been bold enough to kick Uncle Sam’s ass — all they do is kiss it.

Filipino activists condemned the Philippine government for refusing to assert jurisdiction over Laude’s murder case. In a fiery rally at the US embassy, protesters called for the junking of the VFA and other military agreements they say will only lead to a rise in crimes committed by US troops in the country.

This story by Karlo Mikhail Mongaya was originally published by our partner Global Voices Online, a community of bloggers from around the world.