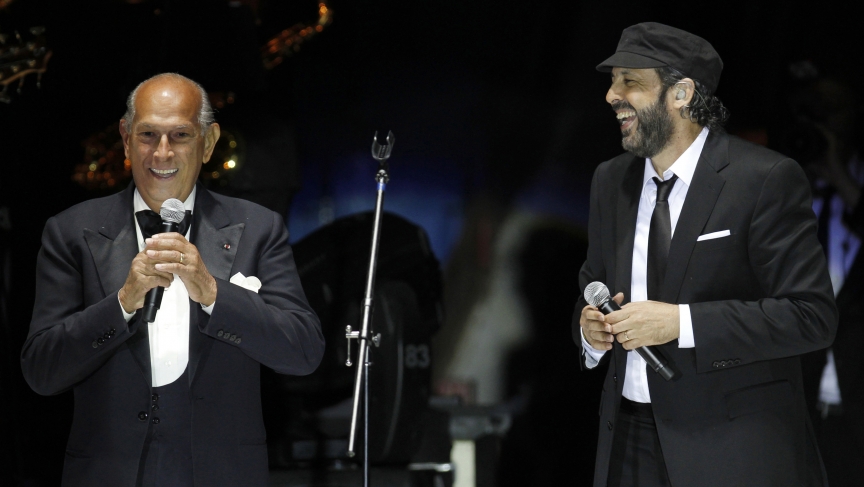 Designer Oscar de la Renta addresses the audience next to singer Juan Luis Guerra during a presentation of his collection in Mexico City in 2011.

Dominican-born designer Oscar de la Renta died on Monday in his Connecticut home at the age of 82. The sad news soon reached Socrates McKinney, the artistic director of DominicanaModa 2014, the annual fashion extravaganza that’s now underway in the Dominican Republic.

McKinney has campaigned for years to persuade the mayor of Santo Domingo, the country's capital, to name a street in honor of de la Renta. "We thought it was a fair decision to have a street named after our most universal Dominican man," he says. But the effort never got off the ground.

So McKinney decided to use the opening night of DominicanaModa on Monday to launch a new social media campaign to honor his hero. "I was wearing a T-shirt with #UnacalleparaOscar — in English that is 'A street for Oscar,'" he says. "So we decided to make the announcement, and to ask all the people in the audience to start sharing and reposting #UnacalleparaOscar."

Only after going backstage after the announcement did McKinney learn that de la Renta had died. "It was a big, sad sensation for us," he says. "Our feelings were hurt because he was so close to us."

De la Renta was much admired by Dominicans, says McKinney, because he represented the potential for every person to succeed: "No matter where you were born, or how small the island where you are born ... if you have passion for what you do, if your goals are very clear, you can succeed in life."

McKinney says all students of fashion in the Dominican Republic take inspiration from de la Renta's example. "All of us believe we can do that if we have the passion that he had when he started working as a fashion designer," he says.

De la Renta paid attention to every detail of his shows back home in Santo Domingo. "He used to call very often to see what was going on, if the models were fitted yet, how was the make-up, how was the show, how was the music," McKinney says. "He was on top of every single detail. And that passion, that love for fashion, that was his major feeling."

McKinney's fondest memory of de la Renta came three years ago in New York. "We were talking about his upcoming show in Santo Domingo and there was a dress that just came in and it was hanging on the door, and he looked at me and said 'Socrates, do you know that I did that dress in 1963?'" he recalls.

"Today a woman can still wear that dress and make an entrance in a big ballroom, and she's going to be the star," McKinney says.  "I mean, you can wear this dress 50 years after it was created. I think that's a major achievement. They are timeless."

"Everyday you have to reinvent yourself" #RIPOscarDeLaRenta