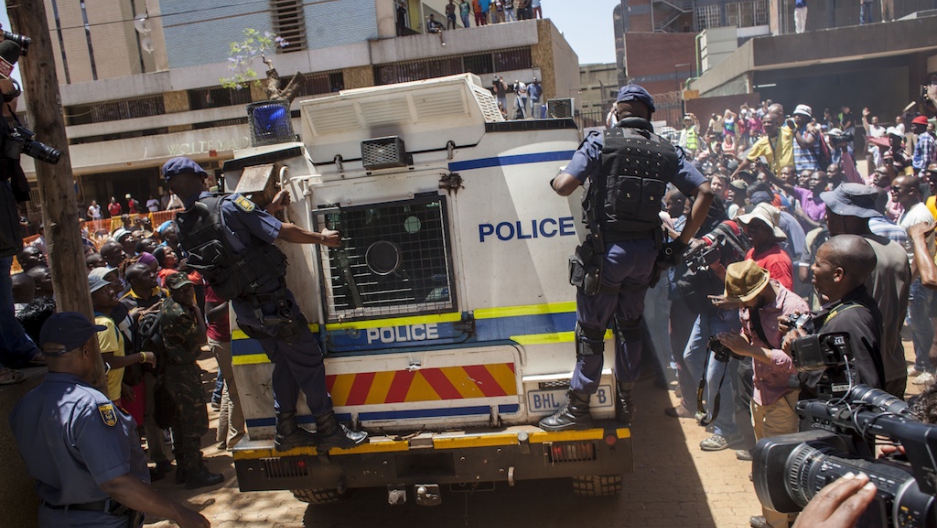 PRETORIA, South Africa — As Oscar Pistorius entered Pretoria's High Court for the last time a free man, a protester dressed in orange prison garb, chains draped around his neck, waved signs and chanted: "Are certain offenders more equal than other offenders before the law?"

The answer, the judge took pains to make clear in her sentencing of the South African double amputee sprinter, is no.

"It would be a sad day for this country if an impression was created that there is one law for the poor and disadvantaged and another for the rich and famous," Judge Thokozile Masipa said.

Masipa on Tuesday sentenced Pistorius to five years in jail, having found him guilty of manslaughter in the shooting death of girlfriend Reeva Steenkamp in the early hours of Valentine's Day 2013.

Pistorius also received a suspended sentence of three years for a firearms-related conviction, from an incident in which the athlete fired a gun in a crowded Johannesburg restaurant.

Masipa, in a detailed ruling that relied heavily on case law, reminded the court of the importance of "proportionality," and emphasized that an appropriate sentence should be neither be too light nor too severe.

The judge said she was satisfied that South Africa's correctional services department was equipped to deal with inmates who have special needs, rejecting the testimony of probation officer Annette Vergeer, who had claimed Pistorius would be vulnerable to gang rape.

The judge spoke of her "unease" in listening to one witness after another focusing on Pistorius' vulnerability as a disabled man. During his career as a sprinter, Pistorius had battled to compete with able-bodied runners, and became the first double amputee to run in the Olympics, at the 2012 London Games.

"I am of the view that a non-custodial sentence would send the wrong message to to the community. On the other hand, a long sentence would not be appropriate as it lacks the element of mercy," Judge Masipa said.

But how much time the Paralympian will actually spend behind bars remains to be seen. Pistorius' legal team said they thought he would be eligible to apply for house arrest after just 10 months in prison.

Pistorius stands after being sentenced at the Pretoria High Court. (AFP/Getty Images)

As court adjourned, a dazed-looking Pistorius was immediately taken to the High Court's holding cell, and later transported to Kgosi Mampuru II prison in Pretoria. As he left the dock, Pistorius slipped off his wristwatch and handed it to his uncle Arnold Pistorius.

"Oscar will embrace this opportunity to pay back society," Arnold Pistorius later told journalists. "I hope Oscar will start his own healing process as he walks down the path of restoration."

Nathi Mncube, a spokesman for the National Prosecuting Authority, said he was disappointed Pistorius was convicted of culpable homicide, as manslaughter is known in South Africa, and not murder.

But he described the jail time as a "consolation," adding: "The South African public will be satisfied."

The prosecution has 14 days to decide whether or not to appeal.

More from GlobalPost: The 5 most surreal moments of the Pistorius trial

Judge Masipa had enormous latitude in deciding on a sentence, which could have ranged anywhere from a fine and a suspended sentence to 15 years in jail.

She said she hoped the sentence would provide some closure for the Steenkamp family, noting that Reeva Steenkamp, killed at age 29, was "young, vivacious and full of life."

In the months before she died, Steenkamp, a law graduate turned model and reality TV star, had been living with the family of her best friend Gina Myers, a makeup artist.

Speaking after the sentencing, Myers described the continuing pain over her friend's death, but also the love and support received during the trial.

She said the sentence was "one step closer to healing" for Steenkamp's family and friends, adding: "No matter what the outcome is, nothing's going to bring her back."

June Steenkamp, who throughout her daughter's seven-month trial had displayed little emotion in court, for the first time looked relaxed, giving a slight smile as she left the courtroom. "It's right," she said.