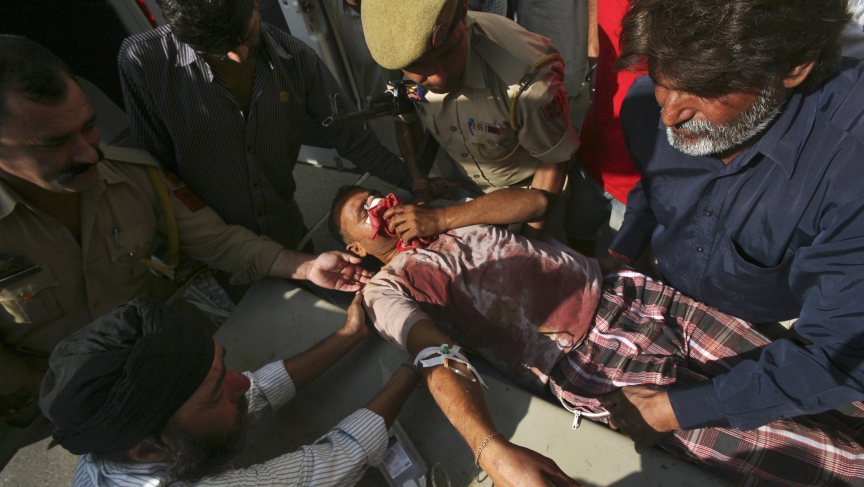 Surjeet Kumar, who locals said was injured during the recent exchange of fire between India and Pakistan, is rushed to a hospital in Jammu October 12, 2014. India and Pakistan exchanged gunfire across the Kashmir frontier on Saturday, Indian military officials said.

Tensions are spiking again along Kashmir's Line of Control between Indian and Pakistan. Over the past few days, the two neighbors have exchanged gunfire at the border, killing 17 civilians and causing thousands more to flee the area.

The new hostilities began roughly two weeks ago, on October 7, when Indian and Pakistani soldiers killed nine bystanders, while shooting at each other. Following the confrontation, both sides blamed each other for inciting the violence. Calm has proven elusive in the days days since, with the two countries trading mortar and machine gun fire, killing another six locals, including three children.

In an effort to relieve tensions, military commanders in India and Pakistan established a telephone hotline to keep each nation's armed forces in regular contact. So far, the effort hasn't accomplished much.

India and Pakistan created the LOC in 1972, following violent clashes over Kashmir. The geographical invention failed to bring peace, but the two countries did sign a formal ceasefire in 2003, after a particularly long 14-year stretch of gun battles along the border.

The latest unrest along the LOC has been called the region's “worst in a decade,” and many fear it could destroy the 2003 ceasefire altogether. Efforts to repair ties have fared poorly. India refused to join Pakistan in meetings with Kashmir's separatists, and Indian Prime Minister Narendra Modi ominously cancelled plans in August to speak with his counterpart in Pakistan earlier this year.

According to Pakistani officials, Islamabad did nothing to provoke Indian attacks. “We fail to understand why the Indians are targeting Pakistani civilian populations,” a Pakistani major general told the press on October 8.

Indian forces tell a similar tale, with the roles reversed.

Mass media coverage about the skirmishes has been polarized. The Times of India, for example, has published articles like “Pakistan May Continue Border Firing Until Diwali,” where the newspaper accuses Islamabad of “violating the ceasefire once again.” The Express Tribune, on the other hand, has proven to be more pro-Pakistani, publishing work like “Escalating Tensions: As India Resumes Shelling, Pakistan Warns of Payback,” implying that India instigated the recent violence. The strongly liberal newspaper Karachi Post has also blamed Indian troops for shooting first.

On Twitter, many have commented on the disparate news coverage. A degree of cynicism colors many of the responses. Omar Waraich, for instance, writes of the LOC border crisis:

The media's inconsistency has angered Internet users, as well. Salman Akram Raja argues that the information war in the press is aggravating the shooting war in the streets.

Media in both India & Pakistan creates parallel worlds of anger and anguish. Dozens of channels but no understanding of each other's views.

Since the beginning of October, the ceasefire has been violated 11 times, and neither India nor Pakistan formally acknowledges responsibility for initiating the conflict.

This story by Nikhil Dhingra was originally published by our partner Global Voices Online, a community of bloggers from aroujnd the world.