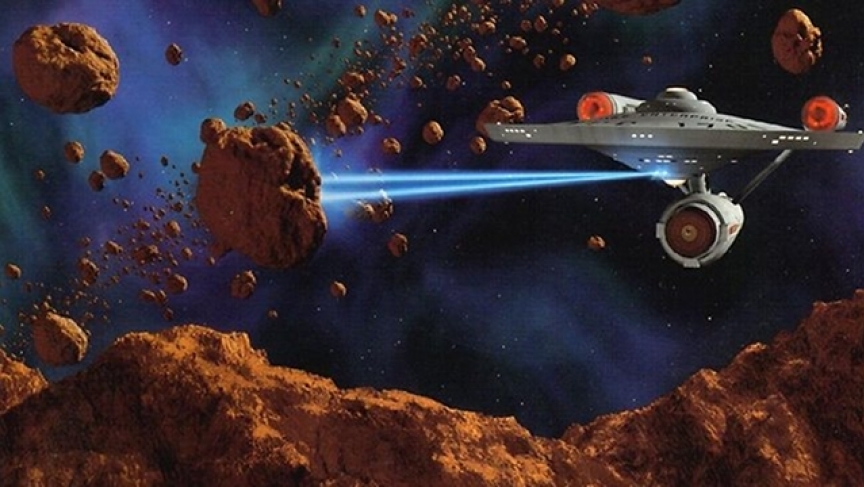 A Star Trek starship uses a tractor beam to maneuver a wayward rock.

If you've watched any version of Star Trek, you've probably seen a space ship deploy a "tractor" beam at just the right moment to push, pull or hold an enemy ship or an object and save the day. Wouldn't that be cool to have? We just got a step closer.

Physicists at the Australian National University have succeeded in using lasers to move particles nearly eight inches in a recent experiment — almost 10 times more than any previous effort. And according to a report from CNET, the researchers believe they could have moved the particles much farther, if not for limitations on the size of the lab.

Of course, the scientists were manipulating tiny particles — microscopic, gold-coated, hollow glass particles — which they could heat with lasers in specific ways to push and pull the particles in various directions. But, hey, Star Trek communicators were once an unbelievable marvel and now many of us have something like it in our pockets.

Three ways you're probably using your thermostat all wrong

For many of us, the dark and cold days of winter are fast approaching. Before long — at least at Global Scan world headquarters in Minnesota — we'll be turning on our furnaces for heat. And if we are like the British, many of us will waste money by fiddling with the thermost. The Telegraph has a handy list of our typical mistakes:

3. Leaving the furnace on when you are away, so it won't have to work so hard when you return. Your furnace doesn't use more energy when it turns on and off. In fact, giving it time off is the best strategy for saving money. Buy a programmable thermostat that will lower the temperature when you're not in your home and turn on your furnace just before you get home. You waste money heating a home when no one is in it (but don't let the pipes freeze!)

Everywhere we go, we take a veritable fruit cocktail of microbes with us — in our mouth, stomach, skin and more. Those microbes make up our "microbiome" — and for each us, it is completely distinct. No two people have the same cocktail. The reason is that our microbiomes are shaped by our genetics, our habits and the environments where we live.

Now, a new research paper says we're constantly spreading our microbiome wherever we go. And because it's distinct, we might be able to one day use that microbial pattern to identify people who are suspects in crimes, or perhaps find people who have gone missing. PRI's Science Friday talked to a researcher about his Home Microbiome Study.

In China, corrupt officials can run, but they can't hide

China's President Xi Jinping has embarked on a high-profile campaign to rein in corruption and misuse of government funds. The penalties can be stark and that's led some criminals to take their ill-gotten gains and flee the country, one step ahead of the police. Now China is sending police officers around the world to bring some of these accused criminals back.

The South China Morning Post reports on the so-called "fox hunt" task force that has been assembled and sent from Asia to Africa hunting down suspects. One officer, Qian Song, even traveled to Nigeria in August, as that country was dealing with an Ebola outbreak. But he got his suspect, with the help of local authorities.

A community in far northeastern Russia wanted to boost tourism, so it decided to hold the first-ever Arctic games. They are intended to celebrate the traditions and culture in the remote northern portions of several countries, including Iceland, the US, Canada and Greenland. And what are those?

One traditional game involves walking around in a circle holding large boulders. The person who holds on the longest wins. But while the games were fun and designed to attract tourists, they may die out fast, according to PRI's The World.

Cultural and economic changes, not to mention a rush to extract natural resources from these remote corners of the world, are leading many young people to forego the old traditions and move to cities where opportunities are more plentiful.

A record-warm September is leading some climatologists to predict that 2014 will go down as the warmest year since record-keeping began. So far, National Oceanic and Atmospheric Administration scientists say 2014 is tied with 1998 and 2010 for the hottest year on record. The Guardian reports that those other years were 0.68 degrees Celsius above average. If September's above-average rate continues through the rest of the year, it would move 2014 out of the tie and into first place. The 10 hottest years on record have all happened since 2000.