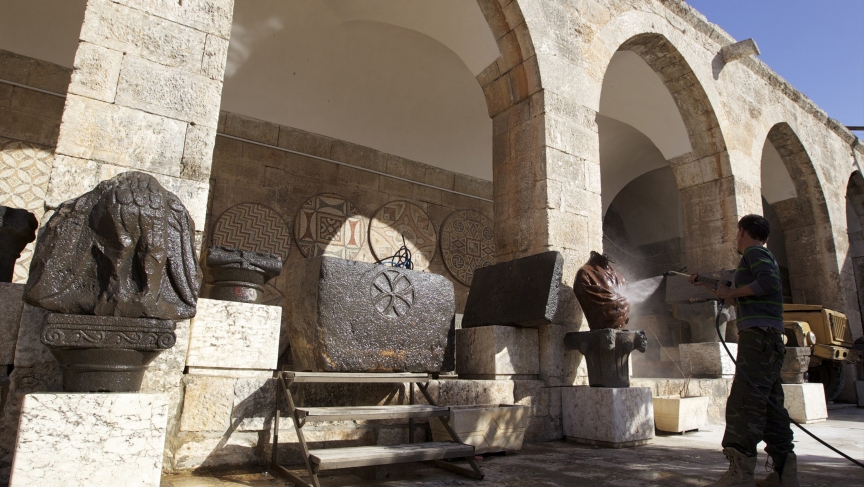 A Free Syrian Army fighter washes the headless statue of Arab poet Abu al-Ala al-Maari at Maaret al-Naaman's museum in Idlib October 19, 2013. The statue of the blind Arab poet Abu al-Ala al-Maari, famed for his 11th-century critiques of Islam and other religions, had been decapitated and toppled from its plinth in his home town in northern in February.

Syria, often referred to as the "cradle of civilization," is a country that has a deep world heritage and is rich with archaeological artifacts. But as ISIS becomes more organized, they've been using their power, equipment, and connections to smuggle ancient treasures out of the country.

Aside from funding the terror group that also calls itself the Islam State, the process of searching for loot can devastate important archaeological sites. But most museums have stopped buying smuggled artifacts from looters, and some have begun repatriating the art back to their home countries.

Erin Thompson, a professor of art crime at John Jay College and author of the forthcoming book "To Own the Past: How Collectors Reveal, Shape, and Destroy History," argues that the US should restrict imports of Syrian antiquities to reduce looting that’s funding ISIS.

“We can tell that looting has been happening by looking at satellite photographs,” says Thompson. “The same ancient sites from before the conflict and after the conflict show us something that looks like the surface of the moon — you’ll see looter pit after looter pit.”

Thompson says ISIS has been destroying pre-Islamic works of art to make a statement. Frequently, however, the extremist group is looting antiquities and smuggling them out of the country to turn a profit.

Ironically, Thompson says these priceless objects are preserved when they are looted and sold, but something precious is also lost: “The archaeological context has now forever been destroyed,” she says.

US law does not prohibit the selling of smuggled goods unless there is an existing agreement with the country of origin. The value of imported Syrian antiquities declared to US Customs grew 166 percent between 2011 and 2013.

“We need to shutdown the demand for these antiquities,” says Thompson. “The United Kingdom recently passed an emergency measure to prohibit the import of any antiquities that look like they might be from Syria so as to not provide a market. I believe the US should do the same.”

It is extremely difficult, however, to show that any particular antiquite originated in Syria, Thompson says. She adds that a dealer would likely jump at the chance to purchase a rare item like a cylinder seal, which was used as a form of signature in ancient times.

“People also wore them around their necks on strings as a form of personal talisman, so many people were buried with them,” Thompson says. “The tragedy for archaeologists is that looters will dig up hundreds of graves in an acropolis — an ancient cemetery — just to hopefully find one cylinder seal. They’re extremely easy to smuggle because they’re about the size of half of your pinky. A backpack full would be worth about $1 million.”

Like Syria, Iraq has experienced looting for years due to the impact of war. In 2008, the US banned ancient imports from Iraq, but it was perhaps too little, too late: Imports of looted goods began in roughly 1990.

“In Iraq, the looting of archaeological sites has continued even after the restoration of some level of order,” Thompson says. “Once you disrupt the economic life of a people, they’re going to take any resource they can to make a living. So the looting has gone on.”