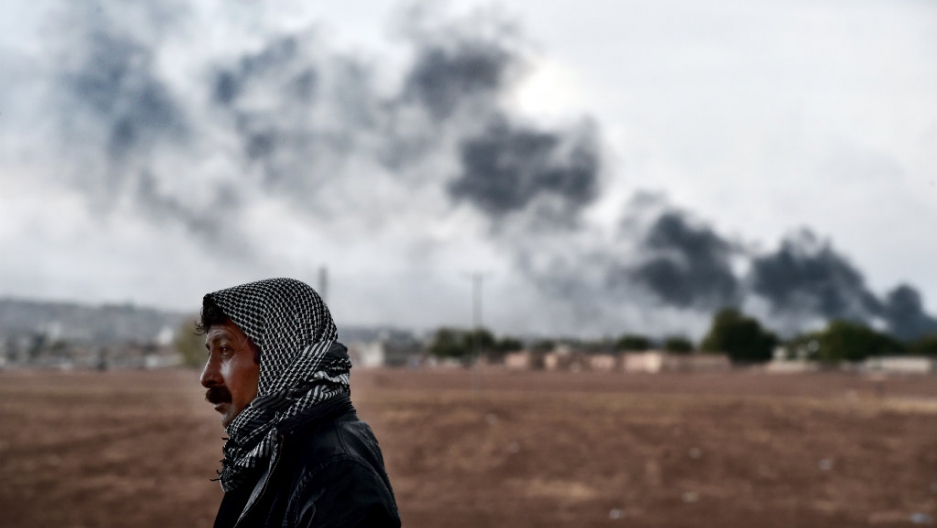 Kurdish man stands close to the Turkish-Syrian border as smoke rises from the Syrian town of Kobane, also known as Ain al-Arab, as seen from the southeastern village of Mursitpinar, in the Sanliurfa province, on Oct. 16. Islamic State militants have suffered setbacks and have begun retreating from parts of the beseiged Syrian border town of Kobani, according to a local official. Since mid-September more than 200,000 people from Kobani have fled across the border into Turkey.
Credit: ARIS MESSINIS
Share

ISTANBUL — Traveling through Istanbul on my way back from a reporting trip in the Middle East, I sipped a cup of Turkish coffee in a café and picked up a stack of bustling daily newspapers.

From the headlines in these traditionally nationalistic papers — stories that feature the state of the Turkish economy and a fair bit of fretting over its image in the European Union — you’d hardly know there was a war raging on the country’s doorstep.

For most Americans watching the region, Turkey seems stunningly indifferent to the peril that the Islamic State (IS) presents as the fighting heats up along its border with Syria and Iraq.

This week US airstrikes and Kurdish forces pushed IS back from the town of Kobani, just inside Syria, while the Turkish military’s tanks sat idle at the border. For months, Turkey allowed IS fighters and weapons to funnel into Iraq and Syria unimpeded as IS arrayed against the Syrian regime.

The government of President Recep Tayyip Erdogan has made clear how much it detests the Syrian dictator Bashar al-Assad, but Erdogan’s moves have been ponderous and vacillating. The country is basically slow walking the US government’s request to step up as part of the multi-national coalition to fight against IS.

To understand where Turkey is coming from, you have to look at the fighting in Kobani from the Turkish perspective, and you have to keep in mind the axioms of power and revenge that rule the Middle East.

And if you look at it from that perspective, Turkey is simply watching two of its enemies kill each other in Kobani.

Kurdish fighters are long-time enemies of the Turkish state, which this week actually launched airstrikes at fighters in the Kurdish PKK forces inside Turkey. The Turkish government has also been at best begrudging and often obstructionist to the Kurdish fighters inside Syria who are trying to prevent IS from slaughtering the Kurds of Kobani.

It reminds me of my days in the late 1980s as a police reporter in New York City when narcotics detectives would shrug with indifference as the city’s murder rate surged amid turf battles between rival drug gangs. They used to call one drug dealer killing another a “public service murder.”

That kind of tough-guy logic doesn’t wash with the international community when it comes to the ominous darkness of the Islamic State and the peril it presents to the region and the world. It is short sighted in the extreme. But it also serves to underscore the tangled and complex dynamics at work in the war in Syria as it has spilled across the borders into Iraq and seems to threaten to engulf the region into a wider war.

All this reveals a simple truth: Turkey is still a predominantly Sunni Muslim country. Many regional experts therefore believe that Turkey, and particularly Erdogan, has some sympathy for the Sunni population in Iraq that is enraged by the Shia-dominated government in Baghdad.

That Sunni-Shia divide in Iraq fuels the fire of conflict and is the source of heat from which IS draws at least some level of community support — especially in the province of Anbar, where IS has gained considerable momentum.

If you want to understand the complexity of the equation in the war in Syria and how it is spilling into Iraq, just consider the relationship between the US and Iran.

The two countries, long-time enemies, are fighting on the same side against the Islamic State, but will quickly part ways when it comes to the Syrian regime. Iran, which is a Shia theocracy, supports Assad, who is a member of the minority Alawite community, a stream of Shia Islam.

That tangled web of geopolitics raises the specter of a global war that could break down along Sunni and Shia lines. For some, there is enough evidence to believe that war may have already started. Only many years down the road will we understand that it began on that day in June when the Islamic State stunned the world by crossing over from Syria and invading the city of Mosul in Northern Iraq.

This war cuts along lines drawn in the sand by the Western powers after World War I that set the boundaries for the modern Middle East, and those lines are rapidly disappearing in the desert winds of war. My trip to the region is part of a long-term reporting project on the 100th anniversary of World War which we are titling “The Eleventh Hour: Unlearned Lessons of World War I.”

Pondering that history can add a new level of insight into how Turkey views this moment. Remember: The Ottoman Empire controlled the Middle East prior to World War I. After the war, the British, French and American forces carved up the region for their own interests, which revolved mainly around the new discoveries of oil deposits in places like Mosul.

The Ottoman Turks desperately warned Arab leaders that they were fools to fall for the Western powers’ ploy by falling in alongside their fight. Back then, the Ottomans sought to cast the narrative of World War I in the theater of the Middle East as a battle of the Muslim world against Christian invaders.

But Sir T. E. Lawrence famously convinced the Arab tribes otherwise, leading them into battle on the side of the British.

The role of Lawrence of Arabia and his Arab Revolt proved pivotal in defeating the Ottomans. With that century-old backdrop in a corner of the world with a long collective memory, there is a view in Turkey and around the region that the imperial designs of the West have now come home to roost.

I caught a glimpse of this sentiment in the Israeli-occupied West Bank just before traveling to Turkey. I drove through the checkpoint from Jerusalem to Bethlehem in the West Bank, past the 20-foot high concrete barriers that divide Israelis and Palestinians, and past the expanding footprint of Israeli settlements that surround Bethlehem.

Jad Isaac, director general of the Applied Research Institute of Jerusalem, which is dedicated to research and analysis that promotes Palestinian self-reliance through greater control over their natural resources, is researching the lingering impact of World War I and the way it shaped the modern Middle East.

“Those who drew the boundaries of the modern Middle East were the Western colonial powers. And they made sure the tensions and the fissures divided those of us who live here,” Isaac said. “They took Kuwait out of Iraq and made it the largest port in the Gulf. They divided Kurdistan into five countries. They made the boundaries to suit their own interests. And those lines that came after World War I are falling apart. It was intended as divide and conquer, and it has fractured and failed and that is what we are seeing today.”

“The fighting stopped 100 years ago, but the war has never really ended,” Isaac explained.

He added, “I think the Ottomans are coming back. Turkey is not going to accept — and in many ways never has accepted — the limited role it was given in the region after World War I...

Turkey has a successful economy and a strong military and Egypt has lost its leadership role. Turkey is already emerging to say that they alone can play a critical role on dealing with ISIS, with Hamas and even in the details of the Israeli-Palestinian process, such as the crucial issue of water rights.”

I left Bethlehem pondering his words as we were stuck in the long line of traffic that builds up at the sprawling checkpoints that Israel has imposed to divide the West Bank town of Bethlehem from the city of Jerusalem. The cement walls have become a canvas for political graffiti and huge painted murals.

One of the messages stood out in stark black-and-red spray paint about six feet high. It read, “The Ottomans Will Come Back!”