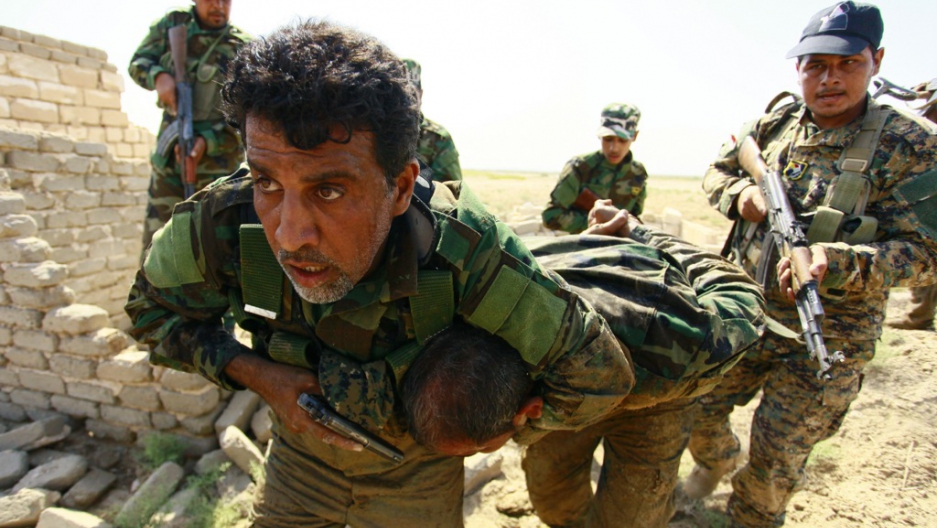 SULIMANIYAH, Iraq — Executing hundreds of prisoners without trial. Arbitrarily arresting villagers along sectarian lines. Hanging bodies from power lines to instill fear in the local community. Gunning down dozens of civilians as they gather to pray.

If this sounds like a checklist for the Islamic State, or IS, try looking across the front line at one of the United States’ key allies on the ground. While the world is focused on the IS terror threat, the US-trained and backed Iraqi government forces and their band of ruthless Shia militia groups have been carrying out atrocities of their own against Sunni civilians, on a scale that in some ways parallels their “terrorist” counterparts.

“Atrocities are being committed on both sides [by government-backed Shia militias and IS],” said Donatella Rovera, Amnesty International's senior crisis response adviser. “The crimes being committed by Shia militias throughout Iraq amount to war crimes. These are not one-off cases. They are systematic and widespread.”

The Sunni extremist IS, also known as ISIS or ISIL, has grabbed headlines with their ruthless tactics in Iraq. Their systematic executions of Yazidis, Shia Muslims and Western hostages have been widely reported.

But Sunni civilians have also suffered. They are often labeled “terrorists” or “Islamic State supporters” by Iraqi authorities and civilians alike based on no more than ethnicity or sect. They also face arbitrary arrests and even execution at the hands of government forces.

“The Kurds and minority groups have places that are relatively safe within the [Kurdish region]. Shias also have safe havens and Iraqi government protection, but for Sunni families it is really tough,” said Rovera. “Most are really quite terrified, especially the Sunni males and parents with young sons.”

An Amnesty International report released Tuesday titled "Absolute Impunity: Militia rule in Iraq," documented hundreds of abductions of Sunni civilians by Shia militias. In Samarra alone, an area that sits on the IS-Iraqi government border, Amnesty outlined 170 abduction cases since June. In many instances the groups demanded ransoms from family members, only to kill their loved ones after payment.

Iraqi lawyer Kassim Ali, who has dedicated his career to fighting for Sunni rights, said the bodies of victims of Shia militia groups were sometimes displayed in the streets of his hometown Baquba to “deter anyone from sympathizing with IS.” He personally has seen four Sunni men hanging from electricity poles. Local reports from July 29 described 15 bodies displayed in the Baquba public square that day.

“For the past two years these militias have been regularly searching Sunni homes without just cause, breaking and destroying everything,” said Ali, who has fled since receiving death threats. “They arrest, murder and kidnap for ransom. They have burned or bombed Sunni mosques throughout Diyala [province], killing scores of people.”

Ali listed the names of Sunnis killed this year in town after town across Diyala, where Baquba is located. The province neighboring Baghdad has been a hotbed of sectarian violence for years. Some of the Sunnis he named were killed in attacks on places of worship, including an Aug. 22 attack on a mosque in the village of Bani Wais. Medical authorities reported at least 73 were gunned down as they attended Friday prayers. YouTube footage shows bodies lying across the mosque floor, including at least one child.

A report by Human Rights Watch this month detailed 255 cases of Iraqi security forces and government-backed militias executing Sunni prisoners. The reported killings took place in six Iraqi cities and villages in early June as civilians withdrew from IS advances.

“Gunning down prisoners is an outrageous violation of international law,” said Joe Stork, deputy Middle East director at Human Rights Watch. “While the world rightly denounces the atrocious acts of ISIS, it should not turn a blind eye to sectarian killing sprees by government and pro-government forces.”

Just this week, families living in areas recently retaken from IS by the Iraqi government and Kurdish peshmerga have reported the deliberate burning of Sunni homes and intimidation of Sunni families who have no where else to go.

Rovera, who spoke to GlobalPost Thursday by phone from London, said the Iraqi government has not only allowed Shia militia groups to operate with impunity, but has supported and even engaged in committing some of the atrocities.

This calls into question the accountability of governments who form the US-led international coalition currently supporting Iraqi troops fighting IS, who have so far failed to pressure the Iraqi government to crack down on militia violence. President Barack Obama's four-point strategy for fighting the Islamic State, which he detailed in September just after Iraq swore in a new government, acknowledged threats posed to Sunnis by the terror group but not by Shia militias.

“Governments who are involved on the military side must create a concrete and vigorous oversight,” Rovera said. Training and arming local forces means international governments share the responsibility for how those weapons are used both now and in the long term, she added.

Abu Makaram and his 31-year-old son both worked as lawyers fighting for the rights of Sunnis. Earlier this year his son was representing four Sunni men arrested by Shia militia group Asa’ib Ahl al-Haq, or the League of the Righteous, when he was gunned down as he left the Baquba courtroom. Eyewitnesses claimed the same militia group was behind his murder.

“We used to defend Sunnis who were tortured into confessions,” said Makaram, who asked for his full name not to be used because he is targeted by Shia groups for his work. “One of my clients lost his arm after being strung up and tortured for days. I had clients whose heads were split open. One man had a concrete block tied to his penis.”

According to local media reports, at least seven lawyers known for defending clients arrested over alleged connections with Sunni militant groups have been killed in Baquba this year. Dozens of Sunnis have been killed while in detention.

The night after his son’s murder, Makaram’s home was ransacked and destroyed moments after he fled to the Kurdish region with his remaining family, including four grandchildren and his son’s pregnant wife.

Before he fled, Makaram also saw the bodies of Sunni men hanging in the streets.

“One was an engineering student who lived in our area,” he said. “If Sunnis stay in government areas they are targeted by the Shia gangs. If they go to the IS territory they are forced to join them or maybe face worse than the Shia gangs would do to them. They have no options.”

“Arabs are not allowed to enter the Kurdish regions anymore. Those already there are treated with suspicion. In the government areas it is really tough going,” she said.

“In a way, as incredible as it may seem, the IS-controlled areas are safer and easier [for Sunnis] because if you do not step out of line, by and large they leave the Sunnis alone.”

But in IS territory the rules are ever-changing. Aside from indiscriminate bombing by the Iraqi army and airstrikes by an international coalition targeting IS, neutral Sunni civilians can’t predict just how long the militants will leave them alone.