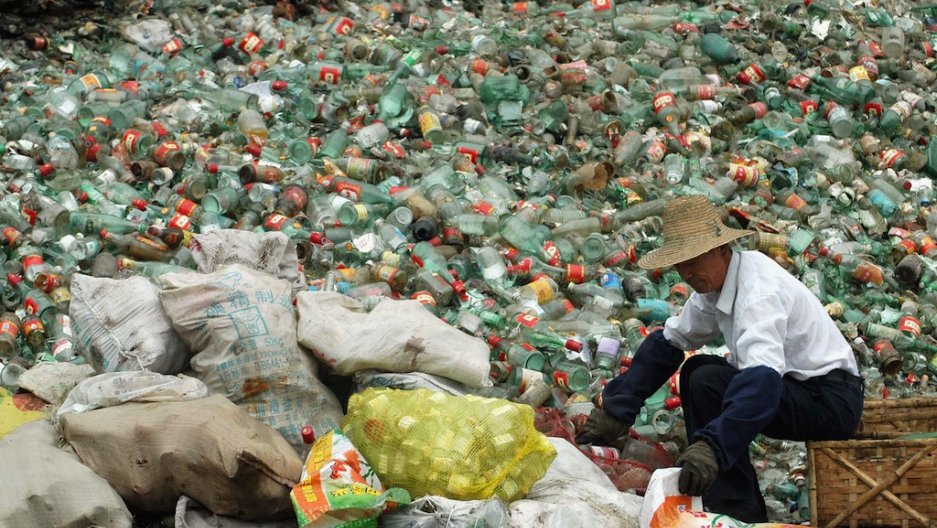 BERLIN, Germany — Michael Braungart is in a hurry.

A former environmental activist who once scaled smokestacks to fight pollution for Greenpeace, the celebrity chemist has emerged over the past two decades as a dark horse in the race to find solutions for saving the planet.

Braungart wants to end the current drive for people to “reduce, reuse and recycle” goods in order to prompt the next industrial revolution. His core idea is for manufacturers and users to no longer “consume” raw materials that are turned into waste, but “borrow” them, a concept he calls cradle-to-cradle.

“It's really reinventing everything,” he says.

But he's running out of time.

“We're losing our industrial base so fast in Europe that in the end we know what to do, but we cannot do it anymore,” he says, talking as though he's trying to fit two hours of interview into a scheduled one-hour slot.

He points to a television set he helped develop for the Dutch electronics giant Philips. The first TV designed not to spew toxic fumes into your living room, it saved so much electricity the company “could have given it away for free, if you converted the energy savings,” Braungart says.

Three months later, however, Philips sold its TV unit to a company in China.

With an unruly mop of sandy curls, wire-rimmed glasses and a rumpled denim blazer, Braungart looks like a Hollywood casting agent’s idea of a genius — Steve Jobs meets Dr. Who. Like a mad scientist turned gossip columnist, he peppers his nonstop riff with bizarre non-sequiturs and the names of luminaries who have embraced his ideas, from Brad Pitt and Steven Spielberg to Ford Motor Company scion Bill Ford and London Mayor Boris Johnson.

“I don't know your sexual preference,” he begins, seemingly apropos of nothing, eventually coming around to comparing the goal of zero emissions to sadomasochism.

“I talked to Boris ... London wants to be climate neutral,” he says. “How stupid! No tree is climate neutral. We want to be more stupid than a tree?”

“We think it's only organic when my own feces cannot go back [to the soil]?” he adds. “This is sick! This is completely perverse.”

It's a heady mix of ideas. But there's substance, and progress, at its heart.

Working with US architect William McDonough, Braungart aims to transform the world's economy through manufacturing processes that not only do no harm, but actually clean the air, replenish topsoil, and, like trees, turn carbon dioxide into oxygen.

It may sound like pie in the sky. But since first presenting the idea in his bestselling 2002 manifesto “Cradle to Cradle: Remaking the way we make things,” Braungart has proven the concept’s validity.

He's helped multinationals develop hundreds of products like Desso's EcoBase carpet tiles, designed for the backing to be easily removed and the fabric sent back to the yarn-maker for reuse, and Steelcase's Climatex compostable upholstery fabric, so green that the effluent flowing out of the mill was cleaner than the water coming in.

The best proof that cradle-to-cradle works, according to a recent Desso annual report, is that the company’s market share of commercial carpets in Europe rose from 15 percent to 27 percent in the period the changes were made, 2007 to 2013.

Still, change may not be coming fast enough.

Critics point out that the certification program Braungart and McDonnough started to push companies to adopt cradle-to-cradle manufacturing processes is woefully behind schedule: 353 certifications against a targeted 30,000.

Decades of research went into the development of non-toxic ink and compostable leather, for example, before the printing and tanning business pulled up stakes and migrated to China and India.

“It took us 18 years to have a leather which we can compost,” Braungart says. “But in that period all the big tanneries closed down in Europe. Now, I can show you a leather sample which is amazingly nice, but we don't have anybody to use it.”

His biggest obstacle may well be some of the world's most popular green ideas — in which his native Germany is an unquestioned leader.

Obsessively sorting their garbage and reusing bathwater since the 1970s, Germans have turned recycling into a religion. But that well-meaning, paper-or-plastic mentality has spawned huge industries predicated on the creation and incineration of waste.

Among them, the construction of high-tech incinerators to dispose of magazines printed in China with ink made from toxic chemicals, and, more remarkably, the import of more than 2,000 tons of hazardous waste to fuel those plants.

Citing Germany's ballyhooed energy transition or “Energiewende,” Braungart says dramatic policy changes are needed to shift focus away from minimizing damage, which he says slows our inevitable destruction but also helps ensure it.

First up is encouraging innovation by targeting the elimination of waste incineration by 2030 through converting to the manufacture of products that can be returned to biological cycles.