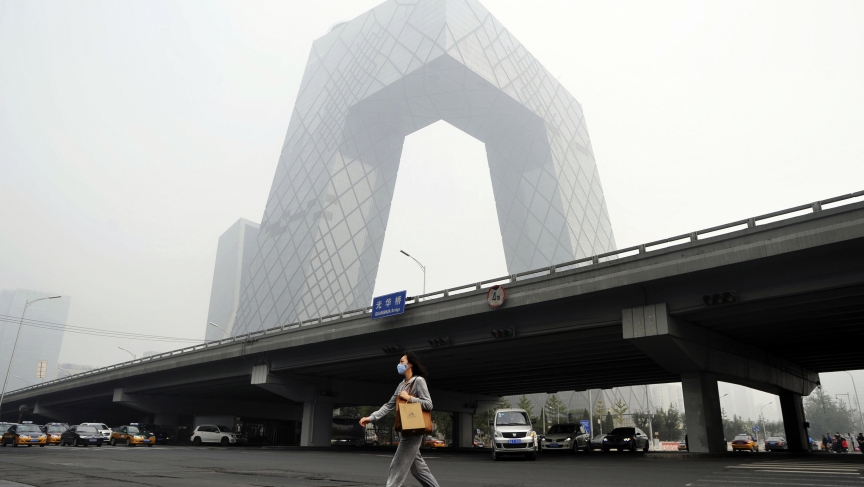 A woman wearing a mask crosses a street near the China Central Television (CCTV) building during heavy smog, in Beijing October 11, 2014.

Parts of Beijing and nearby communities will be socked in by smog this weekend, with visibility at times falling below one kilometer, with PM2.5 levels expected to climb above 500 — a level US officials consider hazardous to human health.

This current crisis is blamed on a weak cold front that moved in and trapped particles inside the city. But the smog situation in Beijing, long a problem and source of public criticism, has been especially bad in recent day, forcing local officials to take emergency measures to try and reduce emissions, including cutting industrial emissions before the cold front even moved in. At least 35 factories were shutdown and construction sites were ordered to reduce dust.

According to the South China Morning Post, Chinese officials cautioned Beijing residents to avoid outdoor activities and urged them to wear masks while they are outside the home. They also urged them to wash their faces as soon as they came inside.

Five things you didn't know about American vs. British English

When you think of British English, you probably think of something highly proper, with just a touch of affectation. But, it turns out, if you went back in history to the 16th and 17th centuries, British and American English sound almost identical. You're probably thinking, sure, that makes sense, when America was young, Americans sounded like Brits. And that's true, except they both sounded like Americans do today.

According to The Telegraph, it wasn't until the 19th century that what we today identify as the British accent was developed. Back at the time of the colonization of America, Brits spoke with the same, neutral accent that remains most common in America. And that's not the only surprising thing about British and American English: While Americans call the season between summer and winter fall, and the British call it autumn, it wasn't always that way. The Brits used to use fall, harvest and autumn all interchangeably. So, in some ways, American English is more authentic even than the Queen's English. The Telegraph has three other facts about English that may surprise you.

What? You've never seen Captain America in a turban?

Vishavjit Singh was born in the US, but he's endured taunts from his fellow Americans many times. That's because he's a Sikh — a religion that requires him to wear a turban at all times. Many Americans have told him to "go back to his country" — or called him a "towelhead." But rather than get upset, or lash out, Singh tries to educate. Sometimes he explains that he is an American — and explains that he's not Arab, nor Muslim, not that either is any reason for someone to be harassed.

But he has another method for battling discrimination: Captain America. Yes, Singh dresses up as Captain America, in a turban. And he cartoons, too. Battling stereotypes through his drawings and visiting cities and college campuses as Captain America has given him a new purpose. PRI's The World caught up with Singh and talked to him about his goals.

Are Nigeria's girls finally coming back?

Nigerian officials surprised watchers Friday morning when they announced that the government had reached a cease-fire agreement with Boko Haram, the terrorist organization that had been terrorizing the country's north, including kidnapping scores of girls from a boarding school six months ago. According to the Guardian, officials are negotiating for the release and return of those girls, who became internationally known through the #BringBackOurGirls campaign.

The Boko Haram insurgency has lasted for more than five years, and there have been previous government claims of cease fires and agreements that would end the fighting. That track record led some to question whether an agreement was really imminent. Others pointed out that Nigerian President Goodluck Jonathan is soon expected to announce he's running for re-election — and this may be a way to boost his standing in the public's eye.

This TV show is changing attitudes about mental health

South Korea has one of the world's worst suicide rates, and people taking advantage of mental health services is generally quite low. In general, people view mental illness and seeking help from a mental health professional as shameful. But attitudes are slowly changing — and a Korean drama is leading the way.

New America Media looked at how the show It’s OK, That’s Love has treated mental illness, and how it has changed views in South Korea. But, interestingly, attitudes have been slower to change in the South Korean community in the US, in part because it has been away from the changes in its culture since migrating to the US.

It was pretty warm in the Brazilian capital city this week — very warm, in fact. The interior city set an all-time high temperature record Wednesday when the mercury hit 36 degrees Celsius, 96.7 degrees Fahrenheit. That passed the old record of 96.4 set in 2008. According to AccuWeather, hot temperature are expected across Brazil, Paraguay and Bolivia into the weekend.