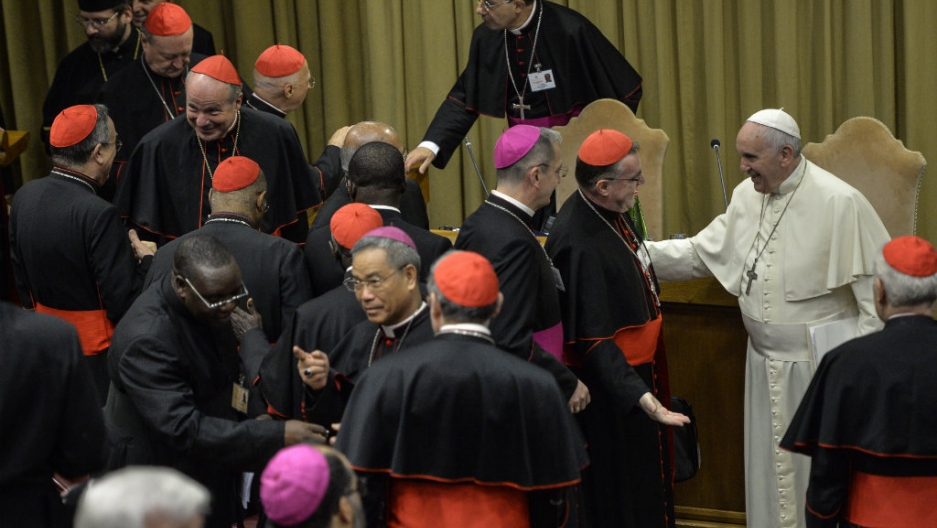 Pope Francis (R) smiles as he arrives for his speech at the Synod on the Families, to cardinals and bishops gathering in the Synod Aula, at the Vatican, on Oct. 6. Pontiff on Sunday launched a major review of Catholic teaching on the family that could lead to change in the Church's attitude to marriage, cohabitation and divorce.
Credit: Andreas Solaro
Share

VATICAN CITY — “The drama continues!” laughed Cardinal Luis Antonio G. Tagle of the Philippines, opening the second week of press conferences on the 2014 Extraordinary Synod of Bishops taking place amid the buzz of wandering tourists around the Vatican.

Tagle began the usual media briefing Monday afternoon by summarizing some of the most noteworthy aspects of the previous meeting, part of a landmark gathering on Catholic families and social issues. He had on hand the freshly released Relatio Post Disceptationem, a synthesis of discussions from the first week of the synod. And that document has already created a firestorm.

Language in the Relatio under the heading “Welcoming Homosexuals” states: “Homosexuals have gifts and qualities to offer to the Christian community: are we capable of welcoming these people, guaranteeing to them a fraternal space in our communities? Are our communities capable of providing that, accepting and valuing their sexual orientation, without compromising Catholic doctrine on the family and matrimony?”

Members of the clergy were visibly upset on Tuesday afternoon after what they said were “untrue” media reports claiming the Vatican was now in support of gay marriage. Church officials continuously reminded the press is not a final document but a provisionary measure intended to highlight what has already been discussed and what needs further elaboration.

"The message has gone out: This is what the synod is saying, this is what the Catholic Church is saying," said South African Cardinal Wilfrid Napier. "And it's not what we're saying at all … [But] whatever we say hereafter is going to be as if we're doing some damage control."

The clergy has in the last week frequently referred to LGBT communities as those living in “irregular” or “imperfect” relationships. But it appears as though the initial discussions, which won’t be concluded until the next Ordinary Synod in October 2015, have established that gay sex within an institutionally recognized union may come to be considered a “permitted imperfection.”

The church can then focus more on those who participate in extramarital sex, and emphasize the positive rather than the negative, said Father Thomas Rosica, CEO of the Salt and Light Catholic Media Foundation in Canada and consultor for the Pontifical Council Social for Communications.

The Relatio adds that “without denying the moral problems,” value in homosexual unions “in which mutual aid to the point of sacrifice constitutes a precious support in the life of the partners,” must be noted.

The document clearly states the moral and ethical consideration to be made: “The question of homosexuality leads to a serious reflection on how to elaborate realistic paths of affective growth and human and evangelical maturity integrating the sexual dimension: it appears therefore as an important educative challenge.”

Rosica said the church must include discussions around the possibility of assistance counseling for children of gay couples — concerning in particular the faith development, wellbeing and access to sacraments of “children who are victims or bearing very heavy burdens because of these very irregular relationships.”

The problem with the synod, said Francis DeBernardo, executive director of the Maryland-based Catholic LGBT rights group New Ways Ministry, is that LGBT couples do not have enough voice.

“I’m very happy with the synod,” DeBernardo began, praising the global survey the Vatican initiated last year to get input from the laity on social issues ahead of the synod. "I think all of that is wonderful, but I think that the problem with the synod is that no openly gay and lesbian people were invited to speak. And I think bishops have to hear that testimony,” DeBernardo said.

Many of the bishops who oppose same-sex marriage, he said, do not realize that gay and lesbian Catholics are people of great faith.

“The fact that they have had to come to terms with their sexuality and face ostracism, to learn self-acceptance and self-love, has really deepened their faith,” DeBernardo continued. “I think that they think there are more people who cast off their faith, and I think it would be so important for bishops to hear not just the love relationship but the fact that it comes from the perspective of faith.”

DeBernardo has been working with New Ways Ministry for 20 years, starting as a volunteer in 1994. One of eight children and a trained journalist, he said his identity was really formed by the Catholic social justice tradition.

In the early 1990s, surrounded by many gay and lesbian friends and acutely aware of the challenges they faced, he realized that the church’s social justice tradition needed to be applied to the human rights of LGBT people as well. And so, he said, he found New Ways Ministry.

Last week, DeBernardo sat in a café on the outskirts of the Vatican City. He had come to Rome to ensure there was a pro-gay Catholic voice present for they synod, hoping to serve as an educational link between two communities that tend to be in conflict more often than they are in harmony. He also served as the Catholic voice on the panel of a conference to end the criminalization of homosexuality in approximately 80 countries around the world.

Asked if he is always received well as the Catholic voice for LGBT rights at conferences, he laughed and said: “We [New Ways Ministry] think of ourselves as a bridge-building ministry and there’s a saying someone said in the US, and it said ‘if you want to be a bridge, you have to prepare to be walked across from both directions.’”

But DeBernardo said they don’t allow the challenges to become daunting.

Instead, he said, they simply serve as a reminder that there are blind spots on both sides, and there needs to be more discussion.

“I stay because I see so much good happening in the Catholic Church on the local level,” DeBernardo continued. “The hierarchy in the United States has been very negative, but the people in the pews and the people that we call ‘middle managers’— pastors, college presidents, people like that — are very supportive, and I just see so much good happening on those levels. [P]eople are really eager to do something positive for lesbian and gay people in the Catholic Church… because they are Catholic and not in spite of it.”

On a broader scale, DeBernardo explained, the church cannot allow gay marriage without acknowledging that procreation is not the only element of sexuality. And while Pope Francis has already started to change the language of the church around LGBT rights, larger changes will take a long time.

“They want to be accommodating, but they have to defend the teaching on sexuality,” he said. “I think they’ve painted themselves into a corner by defending that procreative element so strongly for so long. So now they have to try and get out of that. So there’s got to be a lot of fancy footwork.”

As the synod spends the next two days in smaller discussion groups and prepares to present amendments to the Relatio Post Disceptationem on Thursday, DeBernardo prepares to leave Rome, saying, “Even a small step is still a step.”