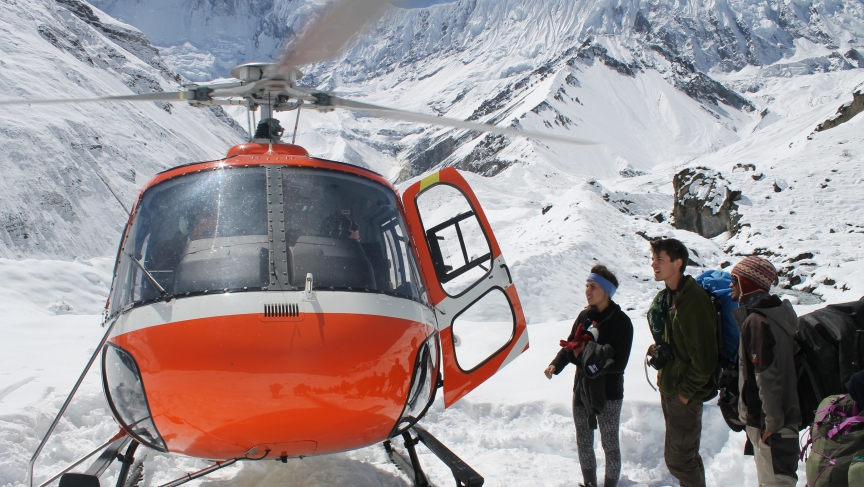 A helicopter rescues stranded trekkers along the Annapurna Circuit trail in Nepal on October 16, 2014.

Courtesy of the Trekking Agencies' Association of Nepal

At least 25 hikers were killed on Nepal's Annapurna Circuit trail this week after a freak blizzard blew through the Himalayas during the height of the climbing season, dumping more than six feet of snow and triggering deadly avalanches.

Navin Singh Khadka, a BBC environmental reporter in the Nepali capital of Kathmandu, says the heavy and unexpected snowfall was thanks to the tail end of Cyclone Hudhud, a huge storm that wreaked havoc throughout Southeast Asia this week.

The Trekking Agencies’ Association of Nepal said it used two helicopters to rescue 77 trekkers on Thursday, including tourists from Israel, Indonesia, Germany, Spain, India, Canada, Russia and Poland. Authorities say 200 trekkers have been rescued in total, while the bodies of eight victims have also been recovered.

"I was sure I was going to die on the way to the pass because I lost my group, I lost all the people I was with and I could not see anything,'' said Linor Kajan, an injured trekker from Israel, who said she was stuck in waist-deep snow. "One Nepalese guide who knows the way saw me and asked me to stay with him. And he dragged me, really dragged me to the tea shop. And everybody there was really frightened." 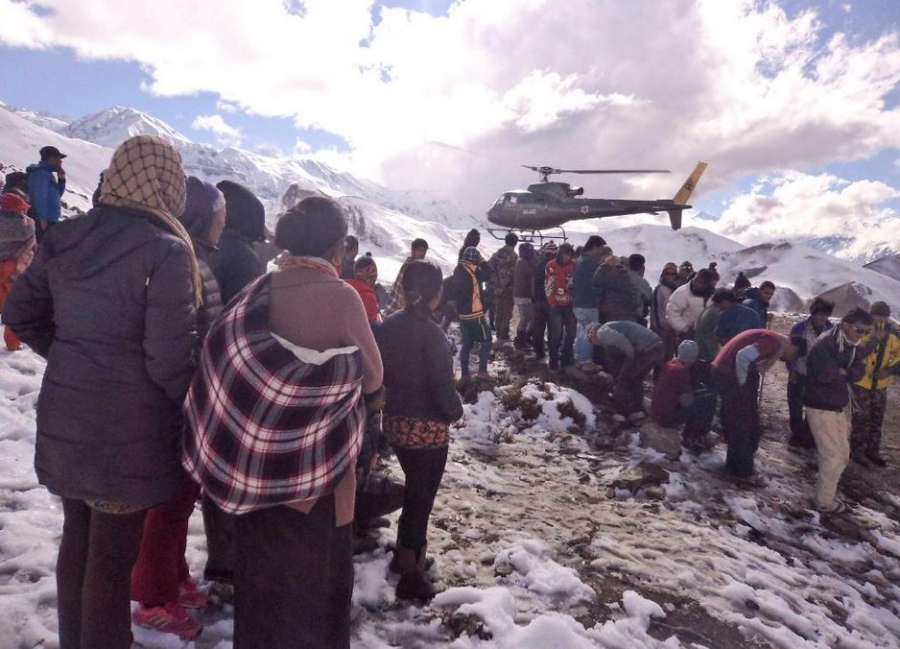 Another man described being caught in an avalanche that smashed into the trail his group was using, burying four Canadian trekkers. The man survived by diving under a large boulder for shelter.

The region was inundated by heavy rains for two days before the blizzard, and Khadka, the BBC reporters, says the severe weather may be indirectly linked to climate change. "Several reports, including those from the United Nations climate experts, have predicted that, in the years to come, cyclones, hurricanes, typhoons will be stronger because ocean waters are getting warmer which means these storms would get stronger," he says.

The emergence of a blizzard far from cyclone's coastal origins lends weight to that argument, Singh says. "We saw that the hurricane actually hit the coastal areas of India, but look at the after-effects having reached this high," he says. "Just as scientists have predicted, that storms are going to be worse and worse."

Khadka says trekkers and tour guides in Nepal are beginning to realize that the effects of climate change are becoming an ever-larger factor in expedition planning.

Rescue operations are continuing, but more bad weather is forecast for the weekend.