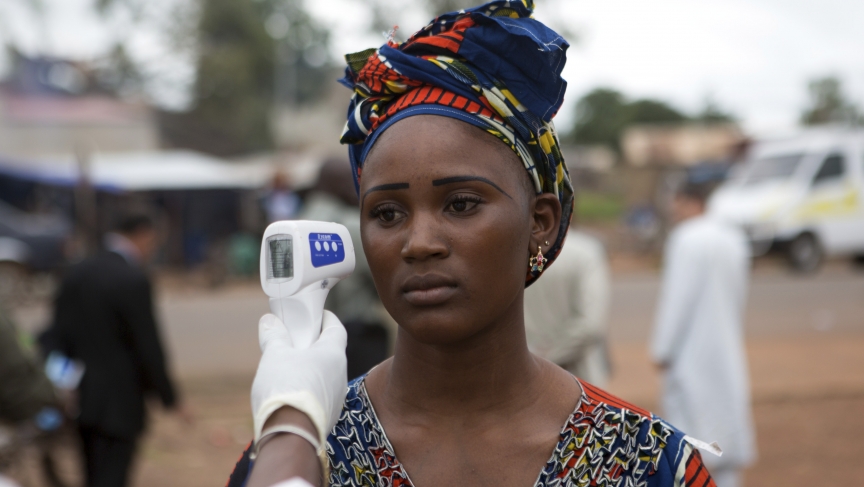 A health worker checks the temperature of a woman entering Mali from Guinea at the border in Kouremale, October 2, 2014.

If the world does not get Ebola under control in the next few weeks, we can expect as many as 1.4 million cases by February 1, 2015, according to the CDC. A deployable, proven cure or a vaccine is still a long time away, so scientists are now racing to develop a rapid diagnostic test.

Laurie Garrett, senior fellow for global health at the Council on Foreign Relations in New York, has been closely following the course of the Ebola crisis. She says a rapid diagnostic test may be the only tool available to contain widepsread transmission of the disease and prevent many more deaths.

“Getting the epidemic under control is all about knowing who is infected before they are so sick that they are highly contagious [or] they are dying and require isolation care,” Garrett insists. “If you can separate the infected from the uninfected, you can begin to stop the transmission.”

What’s needed, she says is a pin-prick test similar to what diabetics do every day to measure their glucose levels. “A little pin prick and a little droplet of blood on a plate and it tells you an answer. It changes color or it luminesces,” she explains.

Garrett says there are “quite a number of things in the pipeline right now.” The FDA has agreed to fast track development “really beyond belief,” Garrett says, “because everybody realizes this is the only missing tool in the tool kit that can make a difference in the next three months.” It could be coming sooner than that, Garrett believes. “If it is going to come at all, it is going to come very quickly,” she says.

The test would make the biggest difference in Africa, where the disease is quickly getting out of control. In Liberia, Sierra Leone, Ghana and other countries, health workers have no idea who is infected until they are symptomatic and have to go into a hospital — and there aren’t enough hospitals. There isn’t a method at the local level, in villages, in neighborhoods or within the cities, to quickly find out who is infected and separate them from others. A rapid diagnostic test would cut the transmission dramatically, Garrett maintains.

A rapid test would help rich countries, too, by reducing the stress, cost and effort of tracking down everyone who might have had contact with an infected person. Wednesday morning, health officials announced that a second healthcare worker in Dallas has tested positive for the disease. The woman took a flight from Cleveland to Dallas the day before showing symptoms. The airline and the medical community now have to scramble to locate and possibly monitor every one of those passengers.

Even if a test were found tomorrow, questions remain about whether the international community or the affected countries have the ability to get the job done quickly enough. The international response is still in great disarray, Garrett says.

“The number one thing I am hearing from folks on the ground is they just don’t know who is in charge of any given thing.” Garrett points to a recent story in the New York Times about an entire shipment of medical supplies that had been sitting at the dock in Sierra Leone for a month. Multiply that several times over, she says. Supplies are stuck on the docks of most of the affected countries. “You need a chain of command,” she says.

“You need somebody in charge, someone to push buttons, make things change. ... The watchword the politically-correct folks like to use is 'coordinated,' rather than in charge. To me, it is like saying a committee will take care of an epidemic.”

The closest parallel to what is happening now is HIV/AIDS in the early 1980s, Garrett says. “First of all is the stigma. Just as HIV got tied up with a stigma against homosexuals and against Haitians in the early days, here we have a stigma against West Africans.” And it is too broadly painted, she says — as if every African presents an equal risk and “we should just keep all Africans out or build a wall around a continent. ... It starts to be a situation that could mean that everybody with black skin is getting pulled aside at airports and having special tests done to them.”

Have questions about Ebola? We've got answers. And we're getting more. Check out everything you wished you didn't have to know about Ebola, and leave your own question in the comments.