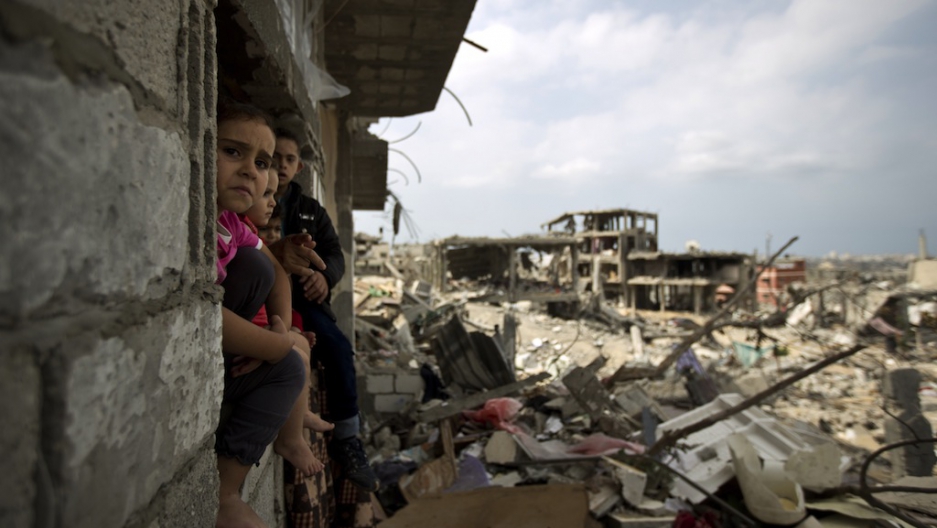 CAIRO, Egypt — At the five-star JW Marriott hotel on the sandy outskirts of Cairo, where rooms cost between $210 and $600 per night, the lobby was packed. Young staffers in neutral-toned suits rushed busily past Egyptian security officers, and occasionally a person might find themselves nose to nose with Tony Blair or Ban Ki-moon.

Some of the most powerful people in the world turned out for the Gaza reconstruction conference over the weekend.

All the attendees deemed the event a great success when, by Sunday evening, Norwegian Foreign Minister Børge Brende announced that the nations of the world had raised $5.4 billion to rebuild the Gaza Strip following Israel’s devastating seven-week offensive in July and August.

The Palestinian government had asked for $4 billion (despite having earlier estimated the total cost of reconstruction to be over $8 billion), so it was with great fanfare that the higher figure was announced. Foreign cabinet secretaries wrung one another’s hands — and of course, that of the host of the event, President Abdel Fattah al-Sisi — and profusely thanked each other for their generosity.

But headline figures are deceiving. This conference, like others of its kind, was largely a charade. Take a closer look at the numbers and it’s clear that some creative accounting is giving the impression of a job well done.

For starters, much of the $5.4 billion was not actually earmarked for Gaza reconstruction. Many countries included in their contributions money they had already allotted to Palestine, including the West Bank, since the beginning of the year under normal aid programming.

“You have to read the title [of the conference] very carefully,” said Tor Wennesland, Norway’s ambassador to Egypt. The implication was that the broadness of “The Cairo Conference on Palestine: Reconstructing Gaza” made it perfectly reasonable to announce money already allotted to the rest of the Palestinian territories.

In other words, a good amount of the aid is not new money intended for Gaza. Much of Sunday’s conference represented a re-announcement of money that’s already been given. Of the $5.4 billion announced by Brende, only $2.4 billion-$2.7 billion is going to Gaza reconstruction. It remains unclear how much of that is new and how much is money already spent.

The United States, for example, announced $414 million in assistance to the Palestinians. But of that, at least $118 million has already been spent since the summer offensive, and only $75 million is new aid for Gaza reconstruction.

This is standard practice for conferences of this kind, where many of the pledges are hashed out in capital cities across the world beforehand.

Even when the checks are signed, actually getting the money promised is an ordeal of its own. It seems to be common practice for states to renege on their commitments.

Six months after the earthquake that devastated Haiti in 2010, only 2 percent of a promised $5.3 billion in aid had been disbursed.

A similar situation arose following a donors’ conference for Syria in 2013. Four months after pledging $100 million, Qatar had only given $2.7 million, according to an investigation by The Independent on Sunday. In the same time period, Saudi Arabia had given $21.6 million of its $78 million commitment.

As of January this year, only around 70 percent of the total $1.5 billion pledged at the Syria meeting had been delivered.

More from GlobalPost: Back to school in Gaza

These broken promises had catastrophic repercussions: The shortfall after the Syria conference forced United Nations agencies to reduce funding for health programs, including vaccinations, and to plan for food rationing.

There are also problems unique to Gaza that present serious challenges to rebuilding regardless of the amount pledged. Following a similar conference in the aftermath of Israel’s 2009 “Operation Cast Lead” offensive, the Israeli government routinely took over two years to approve reconstruction projects, causing the process to stagnate. This time around the aid was pledged with the stipulation that a new Palestinian unity government, not Hamas, would oversee the reconstruction. However, in reality Hamas still controls the day-to-day operation of the Gaza Strip and it’s not clear that they will relinquish that role anytime soon.

The latest Israeli offensive has left more than 65,000 Gazans facing a winter without shelter. One in five have access to water only once a week and 4 billion tons of rubble have yet to be cleared from a territory that is just 139 square miles. The bombardment and fighting killed over 2,100 Palestinians, most of them civilians, as well as 67 Israeli soldiers and six civilians on Israeli soil.

The need for aid to rebuild Gaza is clear — and few could doubt that even half the amount pledged this weekend would do a lot of good. But who really benefits from the fanfare surrounding these conferences?

Of course, no one wants a reconstruction conference to look like a failure. No one wants to seem stingy and unfeeling, not after a summer in which the world was inundated with images of the suffering of wounded Gazan children and grieving parents.

The US benefits more than most from being seen to be taking an interest in rebuilding what was destroyed. It provides Israel an average of about $3 billion annually in defense aid, which is used to buy arms and other security equipment. The US also supplied Israel directly with mortar rounds and grenades used during the summer’s offensive.

One country that has surely benefited from the conference is Egypt, the host country. Despite its active contribution to extending the offensive in Gaza and its ongoing refusal to allow refugees onto Egyptian soil, the country’s leader looked regal and magnanimous as the likes of John Kerry and Ban Ki-moon praised Egypt’s lasting contribution to peace in the Middle East. There wasn't so much as a murmur of Egypt’s role in enforcing the Gaza blockade, let alone its own abysmal human rights record.