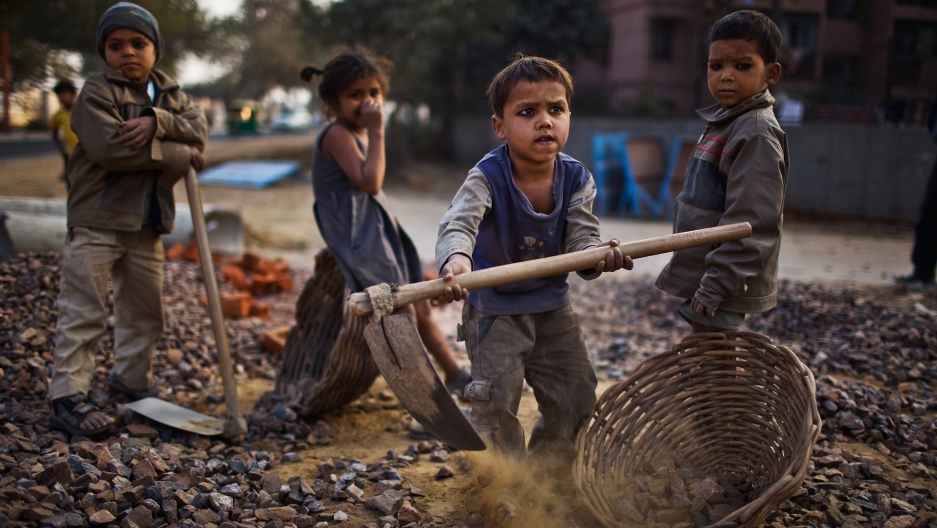 Indian children work nearby to their parents at a construction project in front of the Jawaharlal Nehru Stadium on January 30, 2010 in New Delhi, India. For some Indians, child labor is an uncomfortable issue.
Credit: Daniel Berehulak
Share

LONDON — He has saved 83,000 Indian children from virtual slavery. He has campaigned for 34 years to end child labor. He has transformed more than 350 Indian villages into places where children can receive an education rather than be sent out to work.

No wonder Kailash Satyarthi is the new Nobel laureate.

Yet not everyone in India has applauded the Nobel committee’s decision to award Satyarthi its Peace Prize, alongside Malala Yousafzai, the Pakistani girl who was shot by the Taliban for going to school.

Some Indians have taken to social media to criticize the Norwegian committee. Others have questioned Satyarthi’s credentials as a child labor campaigner.

There has also been criticism of the foreign charities or non-governmental organizations (NGOs) that fund the work of people like Satyarthi.

True, many Indians are proud of the first Indian-born Nobel Peace Prize winner. Prime Minister Narendra Modi met the 60-year-old activist the day after the prize was awarded, and there were firework celebrations in his hometown of Vidisha, Madhya Pradesh.

Meanwhile Satyarthi, who founded the Bachpan Bachao Andolan organization in 1980, was quickly back to work, organizing a raid on a child trafficker the day after the prize was announced.

So why is there controversy in India about the Nobel winner?

1. Some believe Satyarthi and other campaigners dance to the tune of Western pressure groups.

The Nobel Peace Prize is not the first honor to be bestowed upon Satyarthi. He has received at least a dozen other awards from Europe and the US, including the Robert F. Kennedy Human Rights Award and recognition from the State Department.

This foreign involvement has prompted suspicions from some commentators that Satyarthi is merely part of a “misery industry” which exaggerates the problem of child labor in order to win funding from developed nations.

Professor Madhu Kishwar, of the Centre for the Study of Developing Societies, said that awards like the Nobel Peace Prize only go to Indians if they are on the payroll of an American or European NGO.

“The easiest way to get these awards and become globe-trotting and jet-setting is to become a Ford Foundation fundee,” she told GlobalPost. (The Ford Foundation did not immediately respond to GlobalPost's request for comment.)

“Especially if they are missionary agencies, church-backed agencies. The kind of people they promote are projecting an image of India as still in need of a civilizing mission. These NGOs are carrying forward the civilizing mission that the British could not complete when they had to depart in 1947. Most NGOs, especially most foreign funded NGOs, have become a very corrupt sector.”

There's a misery industry in India funded by crap loads of $ from NGOs.Strong incentive to show probs worse than they are to stay relevant.

2. Some doubt the credentials of Satyarthi and his organization.

Journalist Megha Bahree reported that one of Satyarthi’s colleagues at Bachpan Bachao Andolan had even tried to set up fake child laborers to give her a story.

Then Amitabh Shukla, an editor at The Pioneer, one of India's oldest newspapers, claimed that two children who were presented at a press conference in the late 1990s as being rescued had actually been "tutored" to give their story to the media.

“People are asking how many children have actually been rescued and how many have been counted several times,” said Sanu, of Niti Central. “There are potentially issues of double counting where children have been rescued once, but then abandoned and find their way back into the system to be rescued again a few weeks later.”

Kailash Satyarthi's org alleged to hve fraudulently claimed more kids rescued than they in fact did to get foreign $$ http://t.co/jobB72MVTw

Since the partition of Britain’s largest dominion into India and Pakistan in 1947, the countries have fought three wars and countless diplomatic battles.

With tensions rising on the Line of Control that divides the northern Indian state of Kashmir, the Nobel Committee chose to highlight the two neighbors. “The Nobel Committee regards it as an important point for a Hindu and a Muslim, an Indian and a Pakistani, to join in a common struggle for education and against extremism,” the Norwegian Nobel Committee said in its announcement.

But that link has raised hackles in India who view the two issues as entirely separate.

“Did they call Obama a Christian [in their announcement of his Nobel Peace Prize in 2009]? What is this to do with Hinduism?” Madhu Kishwar asked. “[Satyarthi is] not even a practicing Hindu, by his own admission. Why bring in the issue of religion except to strengthen a negative stereotype? Child labor is nothing to do with religion. People don’t do child labor because it’s sanctioned in Hindu scriptures. This is Christian missionary mischief.”

To create India-Pakistan pairing, a desperate Nobel committee plucked an Indian from obscurity—one whose work was little known even in India

The Nobel Peace Prize committee, having disgraced itself by hastily honoring Obama, stoops to play the Indian-Pakistani, Hindu-Muslim game.

4. Some believe the issue of child labor has been oversimplified in the West and that Satyarthi’s campaigns have damaged India’s economy.

Even critics of the Nobel Committee admit India has a big problem with child labor, but they say the problem is nuanced.

Satyarthi launched a campaign called Rugmark which called for an international boycott on Indian carpets which were made with child labor.

“If children are coming home from school and sitting next to their fathers at the loom and picking up skills, I see nothing wrong in that at all,” Kishwar said. “Farmers’ sons start to help their families at an early age. Calling for a boycott on Indian industry is not the answer.”

5. The prize has shone a light on the hypocrisy of some middle class Indians who employ children as domestic servants.

More than 180,000 children were employed as domestic servants in India in 2001, according to Unicef’s analysis of that year's census.

Some commentators hope that the prize will spur India’s government to take action against the practice of hiring children as maids. The International Labour Organization holds that a child should be at least 15 before beginning full-time work.

Writing in the Hindustan Times, Shivani Singh said many wealthy Indians considered that anyone more than 10 years old was no longer a child.

“Employing an underage [child] to do household chores is not an act of philanthropy, as many of us tend to believe,” she said.