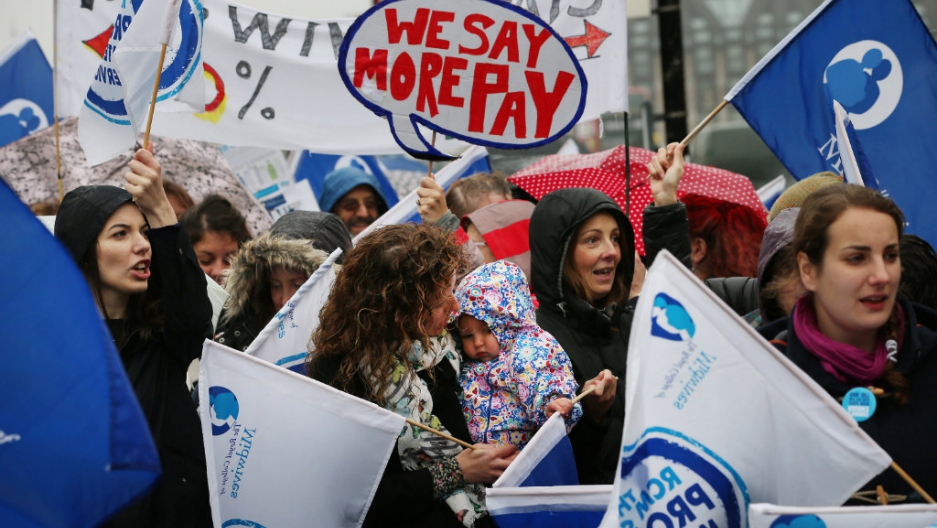 National Health Service (NHS) workers, including a midwife and her baby (C), gather outside St Thomas' Hospital on Oct. 13 in London, England. Unions are seeking a 1 percent raise for all workers, but the government says it would cost too much.
Credit: Peter Macdiarmid
Share

LONDON – Midwives, nurses, paramedics and other healthcare professionals across England and Northern Ireland went on strike Monday morning to protest the reversal of a promised 1 percent wage increase, the first time such an action has been taken in 30 years.

Thousands of people picketed in front of hospitals throughout the country, and for the rest of this week, National Health Service (NHS) employees are performing work-to-rule – meaning they are only working the bare minimum that their contracts demand. Next Monday, radiographers will strike, leading the series of actions by NHS employees into a second week that unions say is a “last resort” to demand fair pay.

Health Secretary Jeremy Hunt defended the decision not to raise wages, saying the NHS could not afford a suggested increase. However, many striking workers claim they have been victims of wage freezes and cuts, and that salaries have not kept pace with inflation.

An independent NHS pay review board agreed, and advised the government to raise pay by 1 percent. The Cameron government decided not to follow this counsel.

“This government is so arrogant it has ignored the advice of an independent pay review,” columnist Suzanne Moore wrote in the Guardian. “These are the people who will be expected to don protective gear and go out and deal with suspected Ebola cases.”

The Royal College of Midwives, whose employees barely make a living wage and often work unpaid overtime, voted to strike for the first time in the union’s 133-year history.

Chief Executive Cathy Warwick pointed out that even with the 1 percent raise, midwives would be making the same in 2016 that they did in 2013, after salary cuts over past years and taking inflation into account. Meanwhile, the costs of household goods and rent have increased across the nation.

“Staff work flat out, often staying late and doing large amounts of unpaid overtime, as they try their hardest to give women the best possible care they can,” said Warwick in a column in the Telegraph. “After years of stress, pressure and overwork, being told they face another year of rising bills - but static pay - is just too much.”

Fury is understandable, especially when MP salaries will see a 9 percent raise next year, after their independent board suggested they deserve higher pay.

And in addition to not seeing raises for a third time in five years, NHS employees are straining to cut costs from a service that is already operating a deficit of nearly £30 billion (almost $48 billion). Meanwhile, just 13 hours of overtime (midwives claim they work at least two on average per week) would equal the same as a 1 percent raise for the majority of midwives and nurses.

Secretary Hunt and other MPs have for the past three days insisted that the demanded 1 percent raise would result in an unaffordable budget increase and thousands of layoffs. According to Hunt, the 1 percent raise is unfathomable on top of the annual average incremental 3 percent raise that he claims most health workers receive based on seniority.

This is a red herring. Even doctors and dentists, employees that are near the highest pay groups, will only receive a 1 percent and 1.6 percent contract raise, respectively, while 600,000 NHS staffers won’t receive higher pay over the coming year.

“We work hard, we work extra hours, it’s not incremental. Our increments are what we earn already,” said one protester standing on the picket line in Newcastle to the BBC. “That’s not a pay raise. We’re asking for our one percent.”

Protest actions will continue through this week and next, while hospitals have struggled to fill gaps and the military filled in for ambulance drives and paramedics who joined the strike in London.

Scotland saw no strikes, as the government there voted to raise health workers’ pay by the suggested 1 percent.