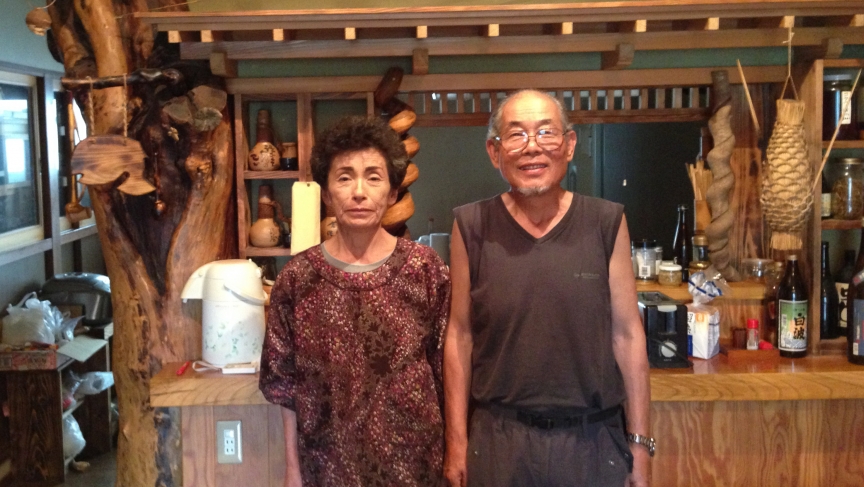 Kiyoko and her husband Yoshishiro Baba ran a fish restaurant in their home in Kawauchi until the Fukushima meltdown. They came back home after 13 months, but they're still concerned about radiation.

Most Japanese towns have a Bosai Musen, an emergency broadcast system. In the town of Kawauchi, 15 miles southwest of the Fukushima Daiichi nuclear reactors, it gets tested every day at noon with a jingle. The speakers are the same ones that rang the alarm for the nuclear disaster that happened here three-and-a-half years ago.

Kawauchi is nestled in a valley, surrounded by steep mountains, dense forests and plentiful rivers. During the meltdown, radiation coated the area. Now, residents are being told the clean-up is mostly finished, though many houses are still vacant, with overgrown lawns and quiet windows.

But not the home of Kyoko Baba and her husband, Yoshishiro. They moved back as soon as they could, and they are happy to have visitors.

The couple built their house themselves, up a hill on the outskirts of town. It has a warm glow inside: hand-hewn lumber, rice paper doors. A big tree trunk supports the roof in the living room. As we pass by it, Yoshishiro runs his hand over the polished wood, feeling the smooth knots. “It's like heaven here,” he says.

When Yoshishiro retired from carpentry, he and Kyoko opened a restaurant inside the house. He caught the fish, and she cooked them. The old menu is inked in precise characters on wooden tabs hanging in the dining room: local fish, miso soup, sashimi.

Yoshishiro is a tinkerer, and he created all sorts of games for people to play while they waited to eat. He made rubber-band guns to shoot at targets, tubes to blow darts and a little mini-golf course with three holes. When customers were ready to order, they came into the kitchen and hit a hanging wooden fish with a mallet.

But Yoshishiro and his wife have not served a meal at the restaurant since the nuclear accident forced the townspeople to evacuate in 2011. The couple moved into a temporary housing complex in a city an hour and a half away. “It made me so depressed to leave,” Yoshishiro says. “For the first three months I couldn't even laugh.”

Yoshishiro spent the days in the complex whittling wooden trinkets — toy fishing rods and bamboo mallets. “I just kept making things to stay motivated,” he says. “I felt so dark there.”

The government told Kawauchi residents it was finally safe to go home after 13 months. About half of the town's 3,000 residents have returned.

Yoshishiro says he and his wife were concerned about radiation. But, he concedes, “I am 70 years old and she's at a good age as well. We don't have many years for the future. We came back home because we wanted to enjoy ourselves.”

Many of their friends have not returned. Kyoko says that's because it's now harder to live in Kawauchi: The disaster destroyed the shops, schools and services in the bigger coastal cities, services they they relied on. Now the nearest hospital is an hour and a half away.

The Babas are still getting government compensation and could live elsewhere. Some others who have come back may not have that choice.

Kyoko Okabe lives near the Fukushima reactors, and she worries that her property is still contaminated with radiation even after the clean-up was completed.

Kyoko Okabe lives in Iwaki City, just across the town border. Because it's a little farther from the reactors that Kawauchi, she says she is no longer receiving money. “See, that's the town border over there,” she says, standing outside her home. “Since August, the people over there in Kawauchi received 100,000 yen per month [about $1000], but here I didn't get anything, not even one yen.”

Government officials say the clean-up is finished on Okabe's property, but she is skeptical. Decontamination involves removing vegetation and topsoil, but they only clear about 20 meters around each house.

Behind her home, Okabe points at red tape tied to some saplings. “Right there is where they stopped decontaminating,” she says, “so I don't know if it is safe past that point.”

Okabe says she's worried, but the only thing she can do now is give up and accept it.

At their wooden house, the Babas are barbecuing lunch. As we eat, Yoshishiro says he's is building a little guest cabin out front. He wants people who used to live here to come back and visit.  There's activity here now because of all the clean-up workers. But when they finish and leave, he says, Kawauchi will become a lonely little village.