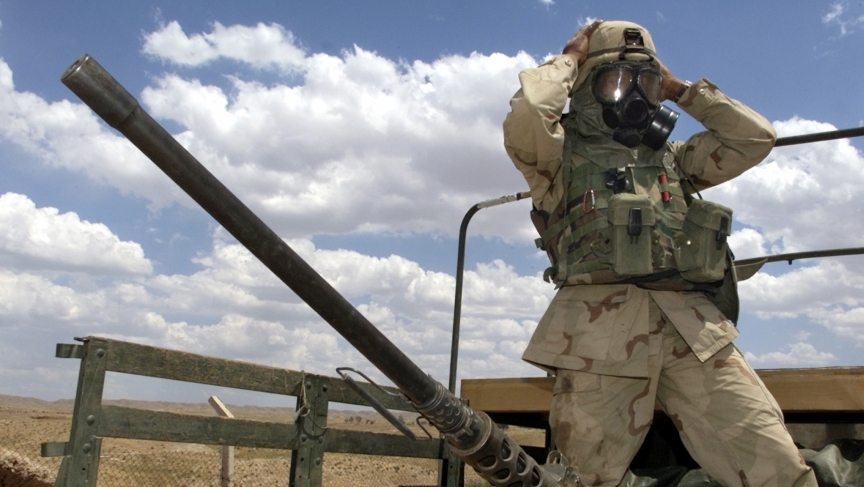 A soldier from the US Army's 173rd Airborne Brigade adjusts his gas mask prior to an air analysis mission near an oil and gas separation plant at the Baba Gurgur oil field outside northern Iraq's town of Kirkuk on May 3, 2003.

When President George W. Bush announced the start of the American war in Iraq in 2003, its stated goal was to find and destroy weapons of mass destruction.

The public later learned that the government's intelligence was wrong — there were no WMDs in Iraq. Sort of. A major investigation by C.J. Chivers of the New York Times revealed a whole new layer to this story on Tuesday.

According to Chivers' report, there were chemical weapons in Iraq, which both the FBI and the United Nations Office of Disarmament categorize as weapons of mass destruction. American soldiers reported finding roughly 5,000 bombs, shells, or warheads packed with chemicals. But those weapons were not the ones American intelligence expected.

“What we found when we started looking at this a long time ago was that, in fact, there were a fairly large number of abandoned chemical weapons in Iraq after the invasion,” Chivers says. They were the remnants of long-abandoned weapons programs, built in close collaboration with the West.

“These were old shells and warheads; many of them had been buried, and a lot of them were pitted and rusted,” Chivers says. “They turned up as a feature of what the war became.”

Soldiers with EOD teams — the people who disarm and dispose of explosive devices and makeshift bombs — often found these chemical weapons while digging through abandoned caches or old stockpiles of Iraqi weapons.

But troops were neither notified nor prepared for how to handle what they found. American and Iraqi forces came into contact with these weapons at numerous points during the occupation, and some were wounded by these chemical agents.

Army Specialist Andrew Goldman told Chivers that he still suffers headaches, fatigue and shortness of breath after being exposed to a leaking shell that tested positive for sulfur mustard.

“There's this oily, reddish substance that just kind of pours out of the [shell],” Goldman said. “As I’m handing it up to my teammate, Sgt. Duling said, ‘Hold on just a minute’ as a precautionary measure. We already had one scare that day ... It was already on our minds. He went to the truck and got some more [chemical testing paper], and when I tested it, this time it was an obvious positive.”

Chivers says that many of the soldiers who were exposed to these abandoned chemical agents suffered from a mix of inhalation injuries and burns.

“The burns tended to cluster on the upper legs, the shins and the hands,” he says. “The reason for that is pretty simple: These shells are big. They’re about 40 inches long, and 90 or 100 pounds. When they were picking them up to move them, they were usually not even aware that they were chemical shells.”

Soldiers who picked up these large shells frequently used their hands and lower extremities to help themselves lift. Doing so would have pressed the chemical agent against their bodies, and many also inhaled some of the toxins.

“They suffer shortness of breath, and in one case there was nasal bleeding and scarring,” Chivers says of the effects from the chemical agents. “Blisters would pop up — usually within hours, or the next day — on their legs or their hands.”

Dr. Dave Edmond Lounsbury, a former Army colonel, told Chivers that there was extensive government secrecy surrounding the soldiers who became ill after being exposed to the chemical weapons.

“If the allies had found WMDs, and, more to the point, if Americans had been injured by them, it strikes me that might be you'd make a big deal about,” Lounsbury said. “These patients would have been celebrities in their own right because they were chemical casualties. But there was no such report.”

Chivers says government secrecy surrounding the chemical weapons prevented American troops from getting the proper treatment they so desperately needed.

“Had all this information been released and made public in real time — if it weren’t for this mix of habitual and reflective secrecy — then these troops would have been treated well,” he says. “Their doctors might have been expecting them and not trying to talk them out of their wounds when they showed up at the aid stations and medical clinics. This whole investigation that we had to do wouldn’t have been necessary.”

Chivers speculates that this information was kept hidden for a very simple reason: The military’s culture of secrecy.

“I think it was kept quiet mostly out of habit,” he says. “You’re talking about a government that will classify a weather report when it’s in a combat theater."