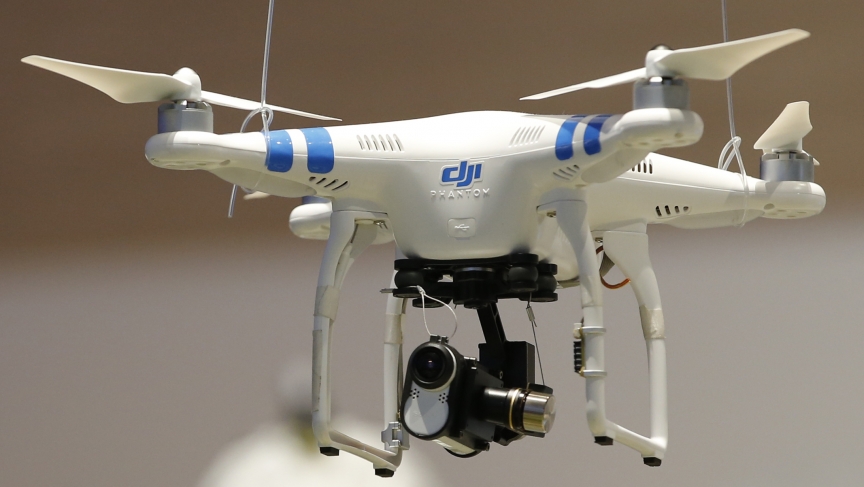 A drone with a Sony Action Cam Mini is pictured at the IFA consumer technology fair in Berlin, September 5, 2014.

Drones seems to be everywhere now, even in the sports world. Check out the one that just invaded a soccer match between Serbia and Albania — and sparked a riot.

If you look at, it seems more like a toy. It has four rotors lit up by green and red lights, looking a lot like a great stocking stuffer. But headlines still call it a drone. So when is a "drone" actually a drone?

"The key factor for whether you need authorization from the Federal Aviation Administration to operate a drone is what you are using it for," says Shawn Musgrave, the projects editor for information-freedom site Muckrock. "Someone who is using one of these units recreationally as kind of a hobby does not need any special waiver. But government agencies who are using the exact same sort of Brookstone or Verizon store-purchased unit do need a waiver."

In other words, the difference between a toy and a drone isn't the device, it's the person who flies it, who they work for and for what purpose they're using it.

Musgrave says law enforcement officers are having trouble understanding the law: "In the last couple years, a few police departments were under the impression that if their aerial unit was below a certain size, or if they were not going to fly above a certain height, then they didn't need permission to fly it from the government."

The FAA recently sent Muckrock a full list of agencies that have applied for a waiver to fly drones. Getting it took nearly a year of cajoling the agency, Musgrave says, though it's not really clear why. Among the organizations on the list are law enforcement agencies, the Army Corps of Engineers and public universities.

"The FAA is certainly under scrutiny from a number of different stakeholders. There are a number of court cases going forward right now from individuals trying to use drones for commercial applications, particularly photography," he says. "But the strategy has seemingly been to put a clamp on the information. The FAA is certainly not in any hurry to release any more information than necessary."

The FAA does have the critical job of ensuring our airspace is safe, and drones are certainly making their job difficult. Musgrave says it's a paradigm shift for the administration. While planes show up on most radar systems, comparably teeny-tiny drones don't always.

"They are trying to limit the number of commercial and government drones that are flying around until they are able to find the most effective way of regulating it," he says.