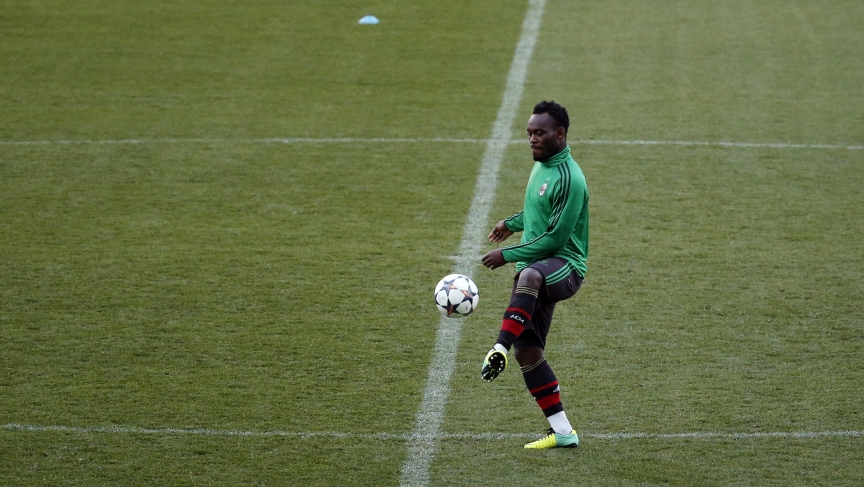 AC Milan's Michael Essien takes part in a training session at the Vicente Calderon stadium in Madrid on March 10, 2014, ahead of a UEFA Champions League match against Atlético Madrid.

I found something on the Internet that wasn't true. Not exactly rare, but it was so far from the truth that it got me thinking about what happens when you lie online.

It all began when I was researching a story about Sierra Leone's national soccer team. The squad can't play in Sierra Leone because of the current Ebola outbreak, and sometimes gets rejected from other countries as well.

When I started to look into that story, one of the first things I did was go to Twitter. I popped "Ebola" and "soccer" into the search box to see what would come up — and I found something that shocked me.

Michael Essien is something like the Peyton Manning of the soccer world: A famous, once-groundbreaking star finding his second life with a new team. He's a superstar in his home country of Ghana and has played for two of the biggest clubs in the world: Chelsea of the English Premier League and now Italy's AC Milan.

So the news that Michael Essien had Ebola was jaw-dropping. It was also completely untrue.

I had to know where this rumor started. The source was a Twitter user named Yury Alkaev, so I messaged him and asked why he wrote that Michael Essien had Ebola.

He never responded, but it made me wonder: What if someone tweeted a lie about me? What could I do if someone said I had Ebola?

“In the US, it's not a crime to lie,” says Zeynep Tufekci, an assistant professor at the University of North Carolina's School of Information and Library Science. "There are a lot of countries where it's not a crime to lie. These people [on Twitter] could be anywhere, so by the time you got through the legal recourse, it might take a long time. And what are you going to get out of it? Especially if it's some random penniless person who’s just making up stuff.”

It would be a different story if Alkaev was tweeting naked photos of a celebrity.

“There are some cases where legal action is appropriate," Tufekci says. "When those nude pictures of celebrities were leaked, clearly there's a legal case there. But if somebody's just lying about a person, the legal recourse is rarely there ... [It’s probably] not worth the headache.”

It's probably not worth the headache for Michael Essien, either. He posted on his Instagram and Twitter accounts on Wednesday, reassuring his hundreds of thousands of followers of his health.

I'm very fit and very healthy,No truth in the internet rumours that I have contracted Ebola.im well & will be training as usual tomorrow.The Ebola virus is a very serious issue and people shouldn't joke about it.Whoever wrote this article is very unprofessional and insensitive...!!!#Jahbless✌️

The true victims of Ebola deserve better and our thoughts & prayers are with them and their families. #sue

But Essien has apparently consulted his lawyers to see if any legal action can be taken. The case would not be against Yury Alkaev, but a Nigerian internet portal that that first reposted Alkaev's tweets.