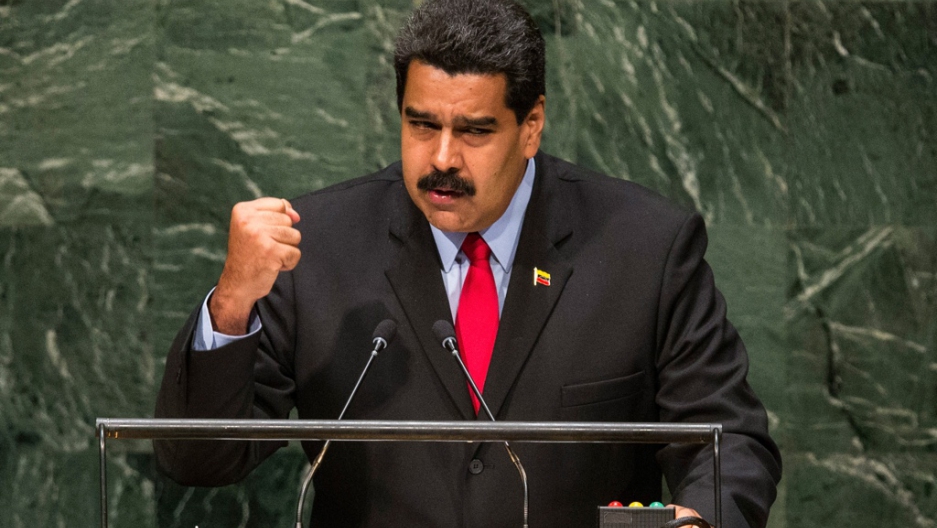 Venezuela won a seat Thursday as the representative of Latin America and the Caribbean at the United Nations Security Council, the powerful forum intended to deal with urgent global crises.

And as if that weren’t enough, one of the people representing the fervently anti-American administration of President Nicolas Maduro in the 15-member body will be Maria Gabriela Chavez, the daughter of the late Hugo Chavez, who, in a 2006 UN speech, famously referred to George W. Bush as “the devil.”

Despite no prior known work experience of any kind — unless you count maintaining a popular Instagram account featuring her father, her pet Pomeranian, and the occasional manicure shot — the 33-year-old socialite was recently appointed Venezuela’s deputy ambassador to the UN.

Suddenly, Washington’s attempts at leading the international response to a potential Ebola pandemic, the Islamic State’s bloody rampage, Russia’s blatant aggression in Ukraine, and a laundry list of other global emergencies just became even trickier.

“This is going to complicate things in the Security Council. There will be a lot of rhetoric, and you can expect Venezuela to back Russia,” said Luis Popa, an international relations expert at Peru’s Pontifical Catholic University. “Whatever Washington wants, Caracas is likely to oppose.”

Juan Cristobal Nagel, a Venezuelan economist who runs Caracas Chronicles, a popular blog critical of Chavismo, adds: “They [the Venezuelan government] are going there to support rogue nations such as Russia, Syria and Iran.”

But although the Security Council will provide Venezuela’s self-styled “Bolivarian” socialist government with a golden opportunity to cause migraines in the Oval Office and engage in the kind of “anti-imperialist” grandstanding in which Maduro’s political mentor and predecessor, Hugo Chavez, once specialized, it may not make a huge difference to UN policy.

That’s because the council’s five permanent members already have veto power. That means the three Western permanent members, the US, UK and France, could block any resolution that Venezuela might propose.

Equally, it means the other two permanent members, China and Russia, already shoot down the kind of resolutions that Venezuela might dislike. The Kremlin, for example, has been defending Syrian despot and Caracas ally Bashar al-Assad’s massacre of his own people.

Still, Venezuela’s rhetoric should be taken seriously, warns Sandra Borda, director of the Center for International Studies at Bogota’s University of the Andes.

“That messaging will help the Venezuelan government to consolidate its domestic support by allowing it to play up its supposed role as an international scapegoat for daring to confront the US,” she said.

And shoring up support at home could hardly be more urgent for Maduro. Venezuelans are suffering through a series of economic and social calamities, which critics claim are a result of 15 years of Chavista government, while Caracas officials blame political opponents and foreign capitalist meddling.

More from GlobalPost: Venezuela: Why they protest

Problems include 63 percent inflation, one of the world’s five highest homicide rates, and shortages of basic goods from toilet paper and bread to antibiotics and cancer drugs. Yet the Maduro administration’s clumsy response has been to vilify critics and even jail opposition leaders.

Although the Obama administration has made clear its opposition to Venezuela’s candidacy for the Security Council, it did not attempt to stop it, despite heavy criticism from Congress and US media.

That includes a public letter from five prominent US senators, three of them Democrats, to Secretary of State John Kerry, warning that Caracas opposes core UN values including “international peace and security and the promotion of human rights and fundamental freedoms.”

Nagel, the Venezuelan blogger, suggests the Obama administration has learned from the failed policies of George W. Bush, who notoriously backed a failed 2002 coup against Chavez. That profoundly undemocratic intervention triggered a major backlash against the US across Latin America, even from governments more sympathetic to Washington than Caracas.

No doubt Washington has also noted how even its allies in Latin America, such as Colombia, Mexico and Peru, have failed to oppose Venezuela’s candidacy to represent them in the Security Council.

“There seems to be, if not fear, then at least anxiety in the region,” says Popa, the professor in Peru. “No one wants to start a fight with the bad kid on the block.”

As a result, Venezuela, and in particular Chavez’s politically inexperienced daughter, will now be sharing the limelight with major world powers over the next 24 months as the UN grapples with international contingencies. Some in Venezuela joke that Maduro sent Maria Gabriela to the UN simply to get her out of La Casona, the presidential palace, which she and her family were said to still be occupying more than 18 months after her father had died.

Nagel has a more surprising explanation — the UN appointment could be a first step in a carefully choreographed political career that could even take Maria Gabriela all the way to the presidency.

Chavez himself sometimes hinted at that possibility, although he probably never expected it would come with Venezuela — home of the world’s largest oil reserves — in such dire straits and his supporters desperate to embrace a savior whose sole qualification is his revered last name.

“If they just wanted to get her out, they could have sent her to be ambassador to the Czech Republic,” he says. “They didn’t need to give her this job, which is so high profile.”

“It is the government’s attempt to launch Maria Gabriela publicly. They might even be preparing to use her as a wild card in the event that Maduro stops being viable as president.”

“Her image is a little frivolous, but the truth is we don’t really know what she is like. Within Chavismo she is very respected, more so than Maduro.”

“She will have to prove herself and we can’t rule out that she may have political skills. It is very interesting that she will be the deputy ambassador. It looks like they will be trying to groom her for a political role back in Venezuela.”

If so, it is to be hoped that the launch of Maria Gabriela’s political career does not come at the expense of the kind of international cooperation needed to address the planet’s most pressing humanitarian disasters.