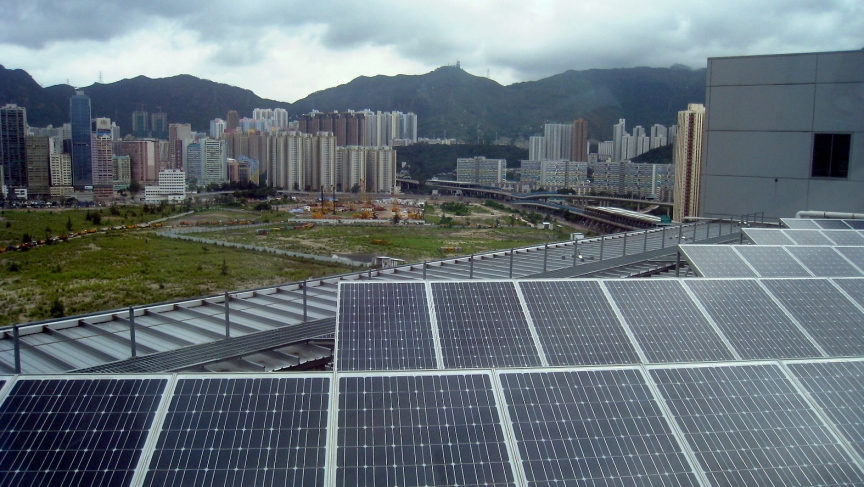 Solar panels are cropping up, but large-scale storage and transportation of solar energy is still a challenge.

Imagine a leaf — but not your standard, sugar maple variety. Instead, this leaf is a small wafer that generates energy by mimicking the process of photosynthesis.

This "artificial leaf" could create enough energy from the sun to run an entire household. And that's the dream of the leaf's inventor, Harvard chemist Dan Nocera — one that he thinks is within reach. But the transition to clean energy, he says, is happening slower than he'd like.

Part of that is because of the amount of infrastructure that is needed to support consumer energy systems. Take gasoline, for example.

The US gasoline distribution system is made possible by decades worth of infrastructure, from tanker ships to pipelines to gas stations. The mass adoption of solar technologies like this leaf would require a whole new, and similarly massive, set of systems to store, transport, and convert hydrogen gas, the product of photosynthesis, into usable energy.

“You’re not just paying for the stuff — the sunlight and the solar panel,” Nocera says. “You also have to pay for building an entire new infrastructure. So that’s really the challenge.”

Nocera and his colleagues are looking to developing countries like India that have more of a clean slate for building and adopting new, hydrogen-based systems. “It’s easier to implement,” he says, “because you don’t have to go up against a 100-year infrastructure.”

“As a scientist, I have to realize it’s all about cost,” Nocera says. To bring green energy costs low enough to compete with coal, oil and gas, we need to see big investments in innovation and implementation — bigger, he says, than the government alone can provide.

“Government can play a role initially as a catalyst, but it’s wrong to look at them long-term,” he says. “It really has to be the market.”

While owning a Prius or using LED light bulbs are steps in the right direction, they are too small to make the kinds of changes necessary to cut down on large-scale damage to the atmosphere, Nocera says.

“We like to do a little local thing, and then point our finger at everybody else, including big oil or big energy,” he says. “We haven’t as a society committed.”

A couple of unexpected partners from the private sector are already jumping into the game and speeding the process along. The defense company Lockheed Martin, for one, has purchased a number of renewable energy companies, including Nocera’s company Sun Catalytix.

But not all energy investments are equal, he says. The recent surge in funding for natural gas fracking has put a “wet blanket on innovation,” he believes. He says he’s seen a number of small, promising companies fail as the market shifts towards natural gas, which, despite its benefits, releases harmful methane into the atmosphere and does not provide a long-term energy solution.

This story comes from an interview on PRI's Innovation Hub with Kara Miller.