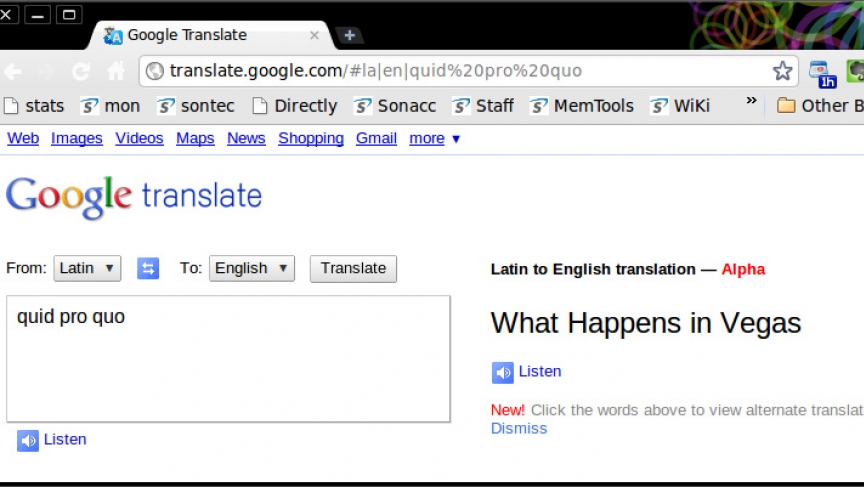 What if Google Translate turned "quid pro quo" into "What happens in Vegas!"

Quick — what does the French word “chouette" mean?

If you fliped open the dictionary and took a look, you'd say it means a type of owl, and it literally does. But the French use it much more frequently to describe something that is cute, neat, nice or friendly — or even terrific or fantastic.

It all depends on the moment, and that means the French will probably know what someone meant when he said "chouette" way before you did. That's why you might call the word untranslatable.

Or is it? Is anything really untranslatable? Michael Wood doesn’t think so.

“[Untranslatable] is a very contested term,” Wood said, “But there’s one thing to be clear about: nothing is untranslatable.”

Wood is a professor of English at Princeton, and, more importantly for this discussion, he's one of the editors of the "Dictionary of Untranslatables."

Translation is not an art of perfection, Wood said — it's not copying. Translating just means rendering something in one language that began in another language. There's always some way to do that.

“But there is a sense, with many words, that when you’ve translated them, you just feel you haven’t done the job even when you’ve done the best job you could,” Wood said.

So untranslatable, according to Wood, doesn't mean you can't make someone understand a word in another language at all. It's rather that nagging feeling that you’re missing something interesting when you try to explain its meaning.

Appropriately enough, the editor of the dictionary's French version, Barbara Cassin, has a different way to describe "untranslatable:" A word with so much nuance, so many meanings, that you can't stop translating it in your efforts to get it just right.

Wood uses "fair" as an example of an "untranslatable" English word: “'Fair' and 'fairness' is pretty much untranslatable. There’s no equivalent in German, Spanish, French or any language that I know."

A French philosopher did take a stab at it in the dictionary, but sure enough... “She sort of thinks of being fair is just getting things right and doing things by the book," Wood said, "whereas my idea is that sometimes, to be fair, you’d have to not do things by the book. It’s not just equality or justice, it seems to me to be something a little more mysterious and intuitive.”

The Dictionary of Untranslatables was itself written in French before being translated into many languages — and then finally English.

“The French book was written, in a way, against English. It was meant to defend the multiplicity of European languages against the invasion of Global English taking over the whole world," Wood explained. "There was an interesting paradox in putting the thing into English, when in fact English was the thing that it didn’t want to be."

The question of untranslatability isn't just academic, Wood adds. Deeming certain words and concepts from certain cultures as "untranslatable" runs the risk of stereotyping these cultures and the people who speak those languages.

“The danger is that, at some point, the specificity will be some kind of essence, some stereotype — that every French person will be impeccably French, and every Englishman impeccably English,” Wood said.

Wood’s favorite word from the dictionary is the Spanish term “desengaño,” which roughly translated into English means to be disenchanted or disillusioned. The French have a similar term: “illusion.”

“English speakers are such pragmatic folks that to be 'disillusioned' is to be deprived of your illusions — and [that's] a good thing, too, because now you know the truth,” Wood said. But while the the basic meaning of the word can be easily translated into English, the terms have much deeper significance in Spanish and French

“In every Romance language, the notion of being undeceived also means 'disappointment,' as if you didn’t really want to be undeceived," Wood explains.

A perfect example is the title of Honoré de Balzac’s novel, “Illusions Perdues," or “Lost Illusions" in English. "You would think that a title like 'Lost Illusions' would mean ‘OK, good, now we’ve wised up,’" Wood said. "But, actually, that title is full of regret. It’s as if we wanted to keep our illusions.”

"Illusion" and more than 400 other terms from around the world are detailed in the Dictionary of Untranslatables.

“Find a word you’re interested in and track out the word,” Wood said, “like a maze, like a labyrinth, follow the signs and maybe you’ll come out  — and maybe you’ll be lost in there forever.”