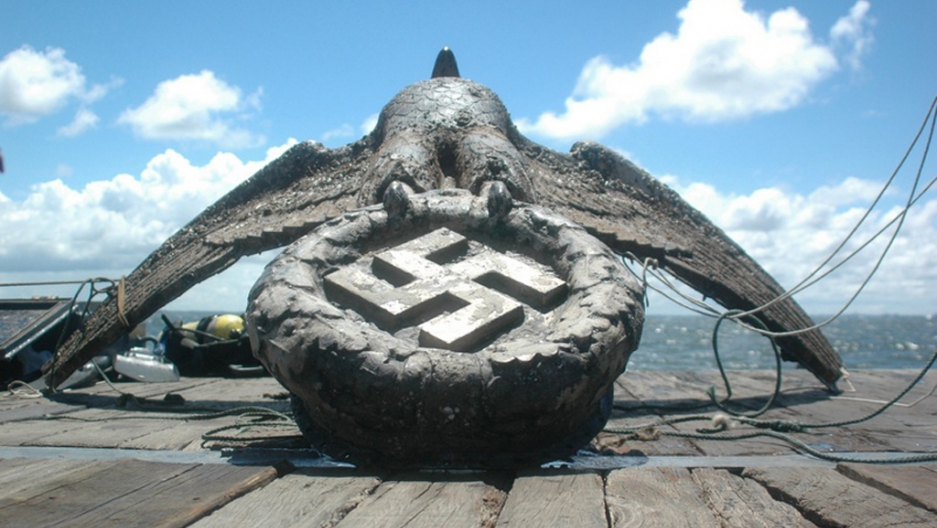 A bronze Nazi sculpture dried off on deck in Montevideo after being pulled back above the waves in 2006 for the first time in more than half a century.
Credit: Alfredo Etchegaray
Share

LIMA, Peru — War trophies don’t come much more imposing than the solid bronze statue that once adorned the prow of the Graf Spee, a notorious Nazi battleship that sank numerous Allied merchant vessels.

Weighing 700 pounds and with a wingspan of nearly 9 feet, the statue is a rare surviving example of the ultimate Third Reich symbol of an eagle perched atop a swastika.

It is also causing the Uruguayan government a headache after local businessman Alfredo Etchegaray had the statue salvaged from the wreck of the Graf Spee in shallow waters just off Uruguay’s capital of Montevideo in 2006.

Of course, it’s not the only Axis relic to ever pop up in these parts. An estimated 9,000 Nazi war criminals fled to South America after World War II, according to German prosecutors. The eagle is the latest reminder of the region’s unwanted links with the Third Reich.

Etechegaray claims to have shelled out $5 million over three decades in retrieving parts of the Graf Spee, and now wants a return on that investment.

After a lengthy legal battle, Uruguay’s supreme court has ruled that the PR mogul does own half the statue, with the other half belonging to the government.

He now wants to sell his rights and have the statue, currently under wraps in a Uruguayan navy warehouse, put on display in a museum. But he claims Germany is pressuring the administration of President Jose Mujica to keep the controversial sculpture out of public sight.

“Why shouldn’t it be displayed publicly, in an appropriate way, of course, with historical explanation? That’s what happens with the Roman Colosseum, with artifacts from the Khmer Rouge, with torture instruments used by the Inquisition.”

The German Embassy in Montevideo and the Uruguayan government’s National Heritage Commission declined to comment to GlobalPost.

Acting on Etchegaray’s behalf, Montevideo art gallery Gomensoro is now receiving offers for the businessman’s 50 percent stake in the statue, which it values loosely at up to $15 million. The reserve price, gallery owner Jose Enrique Gomensoro claims, is between $3 million and $5 million.

“It’s 100 percent certain it will sell,” Gomensoro adds. “But it’s very hard to say how much it will fetch. It could all depend on the whim of a single collector. How badly do they want it?”

That the statue is unique is beyond dispute. The only similar one used by the “Kriegsmarine,” Hitler’s navy, was on the prow of the Bismarck, a much larger warship sunk in the North Atlantic in 1941.

Picture taken Dec. 17, 1939, in front of the port of Montevideo, Uruguay of the sinking Graf Spee. AFP/Getty Images

Classed as a “pocket battleship,” the Graf Spee was named after a German admiral and, for its era, used state-of-the-art technology. Just over 600 feet long, it had a top speed of 29 knots (about 33 miles per hour) and its main weapons were six 52-caliber guns mounted in two turrets, fore and aft.

It sank nine Allied merchant ships in the South Atlantic, as they brought vital supplies of beef, wheat and wool, from South America to the United Kingdom, in the early days of World War II.

But it was scuttled in December 1939 just off Montevideo after being damaged in the ferocious Battle of the River Plate and its captain, Hans Langsdorff, had been tricked by British intelligence into believing that it was about to be surrounded by the Royal Navy.

Uruguay eventually joined the conflict on the side of the Allies. Although after the war it also, unwittingly perhaps, provided refuge to a small number of war criminals, including one torturer known as Dr. Death. But Gomensoro’s valuation for the eagle-and-swastika statue was trashed by William Rey Ashfield, a former head of the National Heritage Commission, who described the multimillion-dollar price tag as “delirious.”

“Really, the Uruguayan government should never have allowed any salvaging of the Graf Spee,” Rey Ashfield said. “But now that this statue is on dry land, I hope that an agreement can be worked out for it to be put on public display, but not in a triumphalist way, here in Uruguay. This is part of our history too.”

He was also skeptical of Etchegaray’s claim that Germany was opposed to the statue being displayed publicly.

“Germany is on the sidelines. If anything, the problem is that they don’t want to get involved, although they would definitely be concerned at the possibility of a private sale leading to the statue falling into the hands of neo-Nazis or being used to glorify the Third Reich.”

“It could be a good attraction for a museum. But it is a controversial piece that many people will also reject. It is a hot potato.”

Meanwhile, Etchegaray is waiting for the Uruguayan government to make up its mind about what it wants to do with its 50 percent stake in the statue. “I’m not waiting 20 years,” he said. “Deciding who owns it has already taken long enough.”