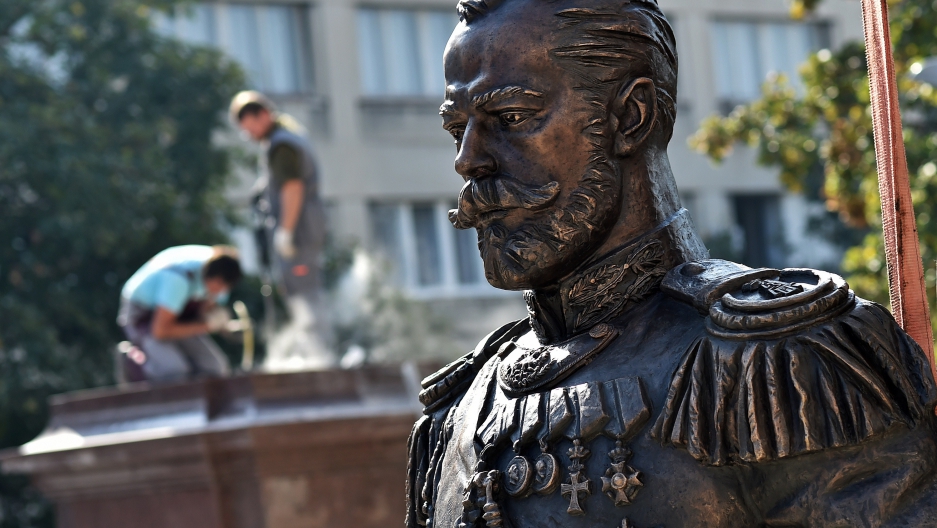 BELGRADE, Serbia — Many Serbs have misgivings about their government’s plans to roll out the red carpet for Vladimir Putin on Thursday, but Suzana Mancic clearly isn’t among them.

Raising a glass of bubbly with a coy smile, she crooned the words: "Happy birthday, Mr. President, Vladimir, happy birthday to you!"

But it’s harder to dismiss the widespread admiration for Putin in a country where historical and emotional ties to Russia run deep even as the government seeks to join the Western mainstream through its bid for membership in the European Union.

"With Russia, we have common roots, language, religion, tradition and culture," he added. "In wars, we have always fought on the same side."

Reflecting that bond, Putin will be guest of honor at a military parade Thursday to mark the 70th anniversary of the liberation of Belgrade in 1944 by Yugoslav Partizans and the Soviet Red Army —commemorations for which have been brought forward four days to fit the Russian leader's schedule.

Western criticism of the visit is underscoring Serbia's delicate position amid the heightened tensions between Russian and the West over Ukraine.

In January, the government here opened formal negotiations to join the European Union. The decision marked a major step toward reconciling with the West 14 years after the overthrow of the authoritarian leader Slobodan Milosevic, whose role in the Yugoslav wars of the 1990s made Serbia an international outcast.

Leading the drive to join the EU is Prime Minister Aleksandar Vucic, a one-time nationalist firebrand who served as Milosevic's mouthpiece in the 1990s but has since become an enthusiastic convert to Serbia's pro-Western course.

Vucic won praise from European leaders by opening negotiations with the government in Kosovo, whose bloody 1999 split from Serbia is still bitterly contested by many Serb nationalists.

All major political parties now back EU membership, which Vucic hopes to achieve by the end of the decade.

Still, the government must tread carefully to avoid alienating its nationalist supporters who continue to look fondly on Russia as Serbia's historical ally.

Unlike other candidates for EU membership, Serbia has refused to sign up to European sanctions imposed in response to Putin's intervention in Ukraine.

"For Serbia to impose sanctions on its greatest political partner, Russia, on whom our national interest depends — the person who would do that in Serbia would act directly against our national and state interests," Foreign Minister Ivica Dacic said during a visit to Moscow last week. "Serbia will preserve its friendship with Russia."

While Belgrade was hardly in the grip of Putin-mania in the days ahead of his visit, signs of that friendship abounded.

Ultra-nationalists have plastered lampposts with bills showing Putin's portrait alongside those of Bosnian Serb war-crimes suspects Ratko Mladic and Radovan Karadzic, along with historical Serb heroes, under the title "Pride Parade" — an ironic reference to Belgrade's gay pride parade held peacefully last month after years of resistance by hardline nationalists.

“Serbs and Russians are brothers,” says Radivoje Miljanic, who runs Cafe Putin — an establishment devoted to the Russian president in the northern Serbian city of Novi Sad.

Miljanic is the local leader of the Russian Party, founded last year to promote closer integration with Russia as an alternative to the EU.

“Putin is a great leader, the only leader who stood up against America, Europe and NATO," he told the Balkan Insight website.

Serbia's ties with Russia are based on more than just fond talk of the Slavic big brother, however.

There’s also cold economic reality: Serbia depends on Russia for most of its oil and more than 90 percent of its natural gas supplies. The main oil and gas company, NIS, is 55 percent owned by Russia's Gazprom energy giant.

That dependence is set to grow.

Moscow plans to build a major gas pipeline into Central Europe via Serbia that could bring $2 billion into local coffers. Promises of further Russian investment in state industries up for privatization present another attractive proposition for a country languishing in recession, where unemployment tops 20 percent and average incomes amount to barely a third of those in the EU.

In fact, the EU is a much larger economic partner. Serbia's exports to the 28-nation bloc run at around 10 times those to Russia, while EU countries provide 78 percent of foreign investment.

Still, some Serbs fear Putin's six-hour visit this week could signal the start of a campaign to deter Moscow's strongest ally in the Balkan region from pursuing its Western track.

The energy dependence on Russia and presence of pro-Russian radical smean comparisons are being drawn with Ukraine, whose moves to tighten political and economic ties with the EU last year triggered Russia’s violent backlash.

Public disillusion with the prospect of EU membership could also strengthen Putin's hand in Serbia. The latest opinion poll in June showed support for joining had fallen to 46 percent, down from 51 percent at the end of last year.

That can be blamed in part on the experiences of neighboring countries that have dampened hopes that joining the EU could bring a quick fix for Serbia's ills.

Croatia remains mired in its sixth year of recession despite having entered the EU in July 2013. Romania and Bulgaria are struggling with corruption seven years after they joined. Hungary's government stands accused of an authoritarian crackdown on the media, judiciary and civil society.

More from GlobalPost: Anti-Roma hostility is growing in Central Europe

Serbs also feel unwanted. With support for further expansion of the EU waning among members in Western Europe, the president-elect of the European Commission, Jean-Claude Juncker, has called for a five-year freeze on any new countries joining the union.

Although Serbia wasn’t hoping to join until 2020, the perception that the West could close the door is causing concern — and boosting those who see Russia as an alternative.

"The prospect of EU accession seems very distant at the moment for the Balkan countries," says Corina Stratulat, senior analyst at the European Policy Center, a think-tank in Brussels.

"The situation in Ukraine serves to underscore the importance of completing the unfinished business in the Balkans as a test for the credibility of the EU's enlargement policy and for the EU’s aspirations as a global player.”