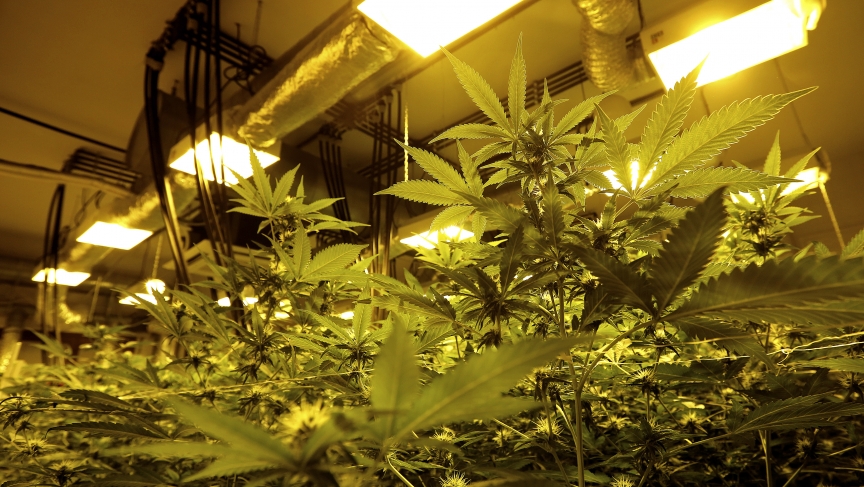 Cannabis plants are pictured in a grow room in a state-owned agricultural farm in Rovigo, about 60 km (40 miles) from Venice, September 22, 2014. Starting next year, a high-security lab in a military compound in Florence will grow cannabis for Italy's health care system .

Italy legalized the sale of marijuana for medicinal purposes last year, but it didn't bother to create a legal system for growing medical-grade marijuana. So Italian pharmacies have had to buy their supplies from Holland. That's meant pharmacy marijuana sells for about 38 euros a gram, while the street price of recreational pot can be as low as five euros a gram.

Now Italy's government has a plan to prevent patients from buying their pot illegally. The Independent reports that the government will have a secure army lab grow high-quality pot for sale to pharmacies. The idea is to make medical marijuana more accessible to authorized patients, as well as choke off support to the country's illegal street dealers.

You read that right. A herd of 8,000 Canadian elk are being accused of causing "chaos" in southeastern Alberta. You might ask, just who's suffering from this chaos? Apparently, cattle farmers.

According to CTV, the elk were released on a Canadian military base in 1997 and 1998 to graze on the tall grasses, so no one would have to mow. Now, the elk have overrun their grazing areas. Cattle rancher Jeff Lewandoski told CTV he was worried the elk would spread tuberculosis or wasting disease to his livestock, ultimately hurting his commercial herd. He and others want the elk herd culled.

Government officials have complied by issuing hunting permits for the elk, but the animals are on safe ground at the military base. No hunting is allowed there for safety reasons.

An American artist won a major victory in US tax court recently. A judge ruled that her artwork, even though it didn't make her much money, was a business — and not merely a hobby. That meant she could rightly deduct her "legitimate business expenses" from her total income — including money earned from another, better-paying job.

The IRS had told artist Susan Crile that she owed the government $81,000 in unpaid taxes because she had taken deductions for her work as an artist. In ruling for Crile, the tax judge legitimized art as a profession. Experts, however, say the artists' victory could be short lived. Now artists will have to actually act like their art is a business.

They will need to actively market and sell their work and show they are trying to earn a profit. If not, the IRS could still claim they are hobbyists. PRI's Studio 360 explains how the tax code distinguishes between businesses and hobbies, and what that means for deductions.

Obama may have to befriend a Syrian enemy

The US air campaign against ISIS shows no signs of pushing back the extremist group that has taken over big swaths of Iraq and Syria. And that doesn't leave US President Barack Obama many options.

Max Fisher writes for Vox that Obama may well be forced into an alliance with Syrian leader Bashar al-Assad — the same leader that Obama has repeatedly said "must go," and the leader who allegedly used chemical weapons against some of his own people. Fisher argues that Obama has no other choice.

The US president is not willing to arm Syrian rebels, for fear of helping the al-Qaeda-linked group Jabhat al-Nusra also fighting in Syria. He's not willing to sponsor a Turkish intervention into the country. Fisher says it's a perfect example of the primary critique many have of Obama's foreign policy: "It is restrained, cautious, and appropriately modest. It is also palpably indecisive, almost a cliche of Solomonic splitting-the-baby."

These pictures show the other side of life at Gitmo

Former civil rights attorney Debi Cornwall, who has defended some of the detainees at Gitmo, traded her legal pad for a camera to document what life is like in Guantanamo — both at the prison and literally on the beach. Though she wasn't allowed to capture anyone's face, her photos show how Guantanamo Bay is both a prison and something of an American oasis. Cornwall shared her photos and described her trip for PRI's The World.

40 maps and charts that explain sports in America: http://t.co/dQpFC8SuXl

Hawaii may have its second hurricane landfall of the year. The Pacific Ocean seems to be making up for the relative lack of hurricanes in the Atlantic Ocean this year. Tropical Storm Ana is the first tropical system this year to develop in the central Pacific, according to the Capital Weather Gang, though several storms have formed in the eastern Pacific and have moved in Hawaii's direction. One of those, Tropical Storm Iselle, hit Hawaii in August. If Ana makes landfall as a hurricane this weekend, as it is predicted to do, it would be only the third hurricane ever recorded to hit the Hawaiian islands.