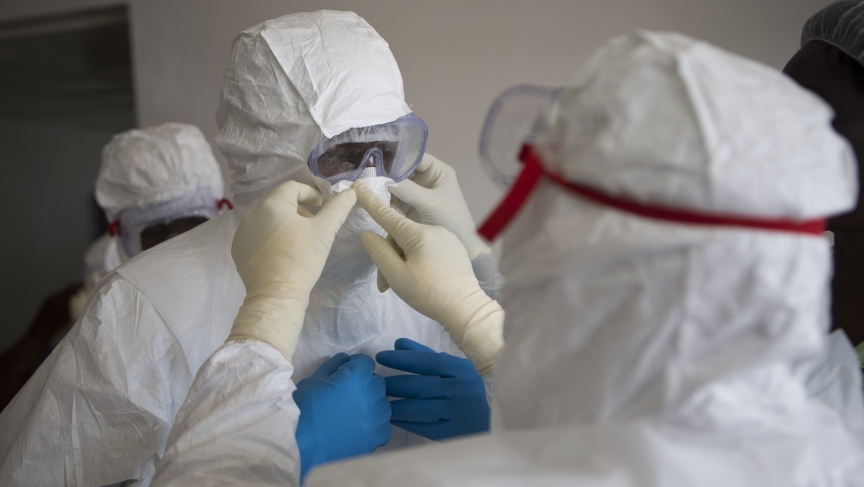 Health workers wearing protective equipment are pictured at the Island Clinic in Monrovia, Liberia on September 30, 2014, where patients are treated for Ebola.

Despite aggressive precautions, a Dallas healthcare worker has become the first American to contract the Ebola virus within the United States.

According to the Centers for Disease Control and Prevention, the newly-infected nurse had extensive interactions with Liberian Ebola patient Thomas Eric Duncan, who died of the disease in Dallas on Oct. 8. Officials believe the disease spread because the rules of quarantine and isolation were not closely followed — something Dr. Adam C. Levine has been warning the world about for weeks.

Levine, an emergency medical physician at the Rhode Island Hospital, spent more than a month working in an Ebola treatment unit in Bong County, Liberia. Though he’s now back home in the United States, he still has a few more days to go before he's officially cleared of the virus by CDC standards.

"Even after returning back here to the United States, there are still 21 days of fear where I’m monitoring my temperature," he says. "There are 45 seconds of panic every time I put the thermometer in my mouth before it beeps and tells me that I don’t have a fever.”

But even with that risk, Levine is more occupied with the Ebola hysteria in the United States, which he says is taking focus away from more important problems.

“From a humanitarian perspective, all of our focus really needs to be on West Africa — that’s where thousands of people are dying right now from Ebola,” Levine says. “In fact, even for our own personal protection here in America, the best way to stop cases in the future from coming to the US is to eradicate this epidemic right now in West Africa.”

Levine argues that aggressively focusing resources on efforts in West Africa can not only end the epidemic, but eradicate the disease entirely. Since the latest outbreak began in March 2014, the virus has killed more than 4,000 people in seven countries.

While in Liberia, Levine got to work closely with many local nurses, physician assistants, hygienists, and burial team members — individuals that are still grappling with the daily struggle to fight the virus.

“There’s just so much stigma associated with the disease,” he said recently. “The fact that these healthcare workers, many of whom have colleagues who have fallen ill or died from the disease, are still here working is really impressive.”

Levine saw not only their efforts, but also their determination to keep fighting the disease. “Our local staff working in the Ebola treatment unit often framed it as their fight, their war against Ebola,” he says. “All of them saw themselves, in many ways, as the soldiers on the frontlines of that battle.”

Ebola has killed more than 2,000 people in Liberia alone. And unlike other diseases, Levine says Ebola presents a large risk to the medical community.

And those infections have wreaked havoc on many of the weak healthcare systems of West Africa, Levine says. “When you have a healthcare system where there are already very few doctors and very few nurses and just a few of them fall ill, it can cause the entire healthcare system to become paralyzed and collapse,” he says.

Like the healthcare workers in Liberia, Levine is feeling the stigma of Ebola now that he's back home. “It’s this strange dichotomy, especially during this 21-day [monitoring] period,” he says. “There are some folks not wanting to see me or be around me, while at the same time I’m getting more media requests that I can possibly respond to.”

While Levine waits out the next 21 days as a “half hero, half pariah," he's also waiting out the psychological effects of the Ebola virus. “This is a disease that generates a lot of fear,” he says. “I’ve called it an epidemic of fear because, in many ways, that’s what it is.”