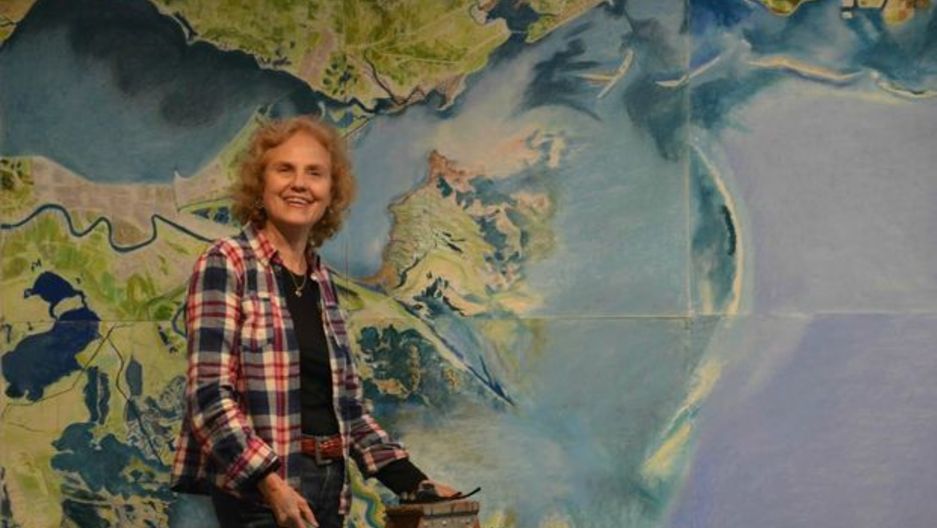 Artist Susan Crile stands with a study for a painting of the BP oil spill in the Gulf of Mexico.

Susan Crile has been a professional artist for nearly four decades, and her works hang in major American museums. But that wasn't good enough for the IRS.

The tax agency viewed Crile's artistic work as a hobby because she hadn't made enough money doing it — and sued her for back taxes in 2010.

The IRS argued that because Crile is also a tenured professor of art, her actual profession is teaching and not painting. That meant the business deductions she took between 2004 and 2009 were invalid, and she owed $81,000 in unpaid taxes.

But the US Tax Court, which deals with federal income tax disputes, doesn't see it that way. The court ruled in favor of Crile last week, a decision some are hailing as a major victory for artists.

Most professional artists — writers, painters, composers — earn very little money and have to make ends meet by working a "day job." But most of them still consider their art as their life's work, and they bristle at the idea that a lack of financial success reduces their art to a "hobby," whether in the eyes of the IRS or anyone else. Many see some hope for respectability in the recent ruling.

But tax expert Tony Nitti, who has blogged about the case for Forbes, says he gets a little nervous when he sees artists “getting too excited” about the ruling. He argues artists need to understand how the IRS thinks.

Suppose you made $10,000 from your art activity but had $50,000 of expenses, Nitti says. You could claim a $40,000 net loss — if the IRS considers what you do a "trader business." And that $40,000 loss can offset income you make from a second job, effectively making a portion of that other income tax-free.

But if the IRS determines that your art is a hobby, you can deduct expenses only up to the income generated by that activity — that is, $10,000, not $40,000. You no longer get the tax benefit of reducing or offsetting your income from a second job.

So how do artists prove to the IRS that they are a trader business? There are nine factors they look at, Nitti explains, but the first and most important one is just common sense: Do you treat your art work like a business?

“You can’t win your case on this factor [alone],” Nitti says, “but you can certainly lose it.”

So here’s what you need to do: keep receipts for your expenses, track your income, track your inventory, get a credit card for the business and open a business checking account. Perhaps most important, hire a bookkeeper to prepare your financial statements.

Why? Because the IRS is not just interested in your record-keeping, they want to know what you do based on those numbers. In a "real" trader business, if you have too many expenses and not enough income, you make changes to the business.

“Showing that you’re using your records to modify your business is hugely important to the IRS," Nitti explains. "If all you’re doing is hanging out in your studio creating art — not marketing it, not networking, not trying to sell it — it looks a lot more like a hobby than a trader business."

Of course, many artists argue that making art — and not marketing or networking — is exactly what they do. But Nitti says you’d better think twice about that if you don’t want to run afoul of the IRS.

And that's why Crile isn’t completely out of the woods: The tax court has not yet decided whether all the deductions she took over the years were legitimate. When that judgment comes down, Nitti thinks it may not be a happy day for Susan Crile.

“Let’s be honest,” he says, “she was deducting what appeared to be a lot of personal expenses — utilities, meals, travel. My guess is if she hadn’t taken all those extra expenses and generated such large losses every year, she may have never ended up in front of the IRS in the first place.”