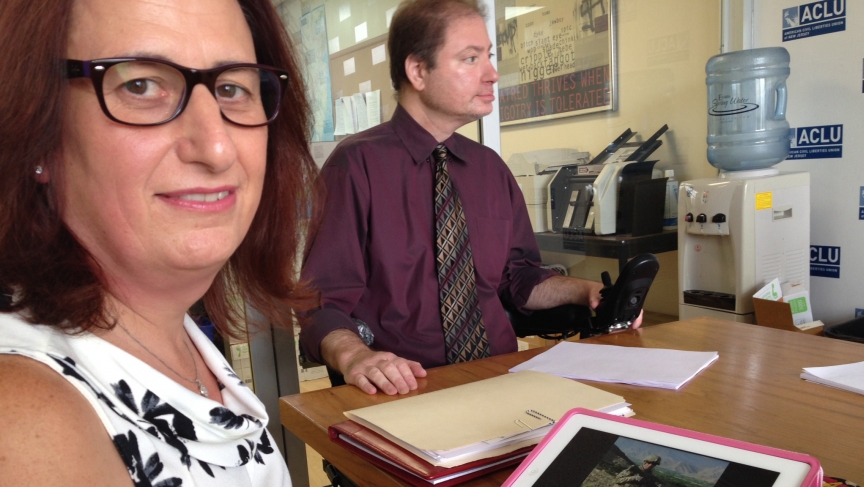 Jennifer is a transgender Army veteran who began making her transition into a woman while she was deployed to Afghanistan.

Jennifer wears black heels, purple nail polish and has shoulder-length brown hair. But before she was Jennifer, her name was Edward. And she used to jump out of helicopters and parachute into enemy-controlled areas on intelligence-gathering missions for the US Army.

She says she took on “all the big tough jobs” in an attempt to suppress who she really was inside. “It was all to try to make things go away,” she says.

Now that she’s retired from the army, Jennifer is one of an estimated 134,000 US veterans who are transgender, according to a survey by the Williams Institute at UCLA Law School. The survey also estimates that about 15,500 transgender people are now on active duty or in the National Guard or reserves, even though the US military doesn’t permit transgender people to serve.

Jennifer started taking hormones to transition into a woman toward the end of her military career — while she was deployed to Afghanistan. She likens it to going through puberty in a combat zone. She was a solid 215 pounds, the biggest guy on her team. But the hormones were making her skin softer, her voice higher.

“Emotionally, I was no longer the same person that I had been before. I wasn’t so much the tough infantry sergeant anymore,” she says. "I had to go off and do that job, and it was the most dynamic job of my career.”

Jennifer says she told some of the women in her platoon, and two men, what was going on. She hid it from everyone else. “I had to,” she says. “If at any point the military would have realized I was transitioning, they would have ended my military career on the spot.”

While Jennifer got the hormones from a sympathetic Army doctor, the US military still bans transgender people from serving openly on mental health and medical grounds.

Jennifer says negative perceptions about transgender people in the military were heightened when Army Pvt. Bradley Manning publicly disclosed that he wanted to be known as Chelsea Manning, after he was sentenced for handing over thousands of classified documents to Wikileaks.

“Think about it. I was already in the middle of my transition when I went, so yeah, I did it," she says. "I could do the job, but they wouldn’t let me.”

Another thing the military won’t let her do is change her name on her military discharge papers, the form known as the DD-214. It’s every veteran’s proof that they served in the military, and it’s needed to receive any military benefits or services.

A spokesman for the Department of Defense says the DOD doesn’t change names on military forms in order to maintain “the accuracy of its historical records.”

So when transgender vets try to access their benefits, their new names don’t match their military records; they have to disclose that they used to be the other gender. Jennifer says it’s not exactly what you want to do when you’re trying to go back to school under the GI Bill, get a veteran’s home loan or go on a job interview.

According to participants of the National Transgender Discrimination Survey, having the incorrect name in the military's system has prevented some transgender veterans from receiving retirement and disability checks from the military, as well as other benefits.

With that in mind, she’s asking the DOD to change its policies. “All I’m looking to do is amend a document so that I can move forward without any discrimination, without anybody knowing, so I can protect my own privacy at some point," she says.

She’s heartened by the fact that Defense Secretary Chuck Hagel has said he’s open to reviewing the military ban on transgender personnel. If the policy did change, the US would join 18 other countries that currently allow transgender people to serve.

But for now, she's still stuck worrying about how her new name will affect her life: "You went out and faced the enemies of the United States," she says. "What a shame that you have to hide that service because you’re afraid of someone’s perception of you.”