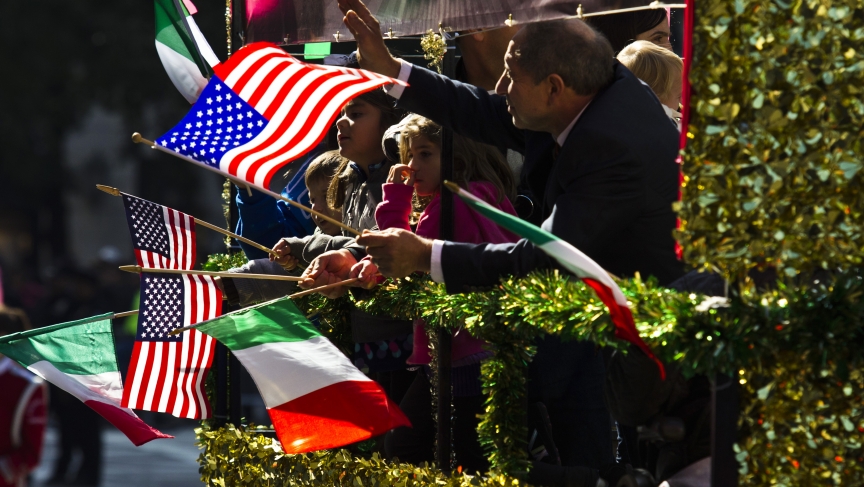 But many Native Americans balk at the idea of celebrating Christopher Columbus' "discovery" of a land they had already called home for centuries — and of dedicating a holiday to a man who sparked what they call a genocide.

"This was the moment in history that began all of this hurt," says Daniel Yang, the director of Organizing and Community Building at the Native American Community Development Institute. "The beginning of disease, of rape, of murder."

That's certainly not much to celebrate, so activists like Yang and Peggy Flanagan pushed their home city of Minneapolis to recognize the second Monday in October as Indigenous Peoples Day. It worked, and this year Minneapolis will join places like Seattle, Portland and the state of South Dakota in rebranding the holiday.

The mayor of Minneapolis and Sen. Al Franken were scheduled to join "hundreds of community members celebrating who we are as indigenous people and the fact that we are still here, we weren't 'discovered,' and just acknowledging our community," she says.

But does acknowledging that community take away from others? Many Italian Americans treat Columbus Day as a celebration of their own heritage; Italian immigrants and their descendants were instrumental in having the holiday established at all.

Italian American leaders in Seattle say they're gearing up for "an aggressive pushback program," as one activist told the Seattle Times, and the Italian ambassador even wrote to the city's mayor in protest.

"While trying to valorize — and rightly so — the dignity of indigenous peoples, the city is poised to strip the Italian community of a celebration that has become, over time, a heartfelt expression of its identity and pride,” wrote Ambassador Claudio Bisognierto last week.

But Flanagan says the conversations she's had in Minneapolis have been positive. "I don't necessarily think that this takes away from Italian Americans," she says. And she points out there are plenty of others to honor.

"There are certainly other folk from Italy — and descendants of — that should be celebrated versus someone who, frankly, started, in many senses, the genocide of a people," she says. "So we think there are probably things in the community that should be lifted up a little more, and this is just a great way to honor folks who have been here for generations."

This story is based an interview from PRI's The Takeaway, a public radio program that invites you to be part of the American conversation.