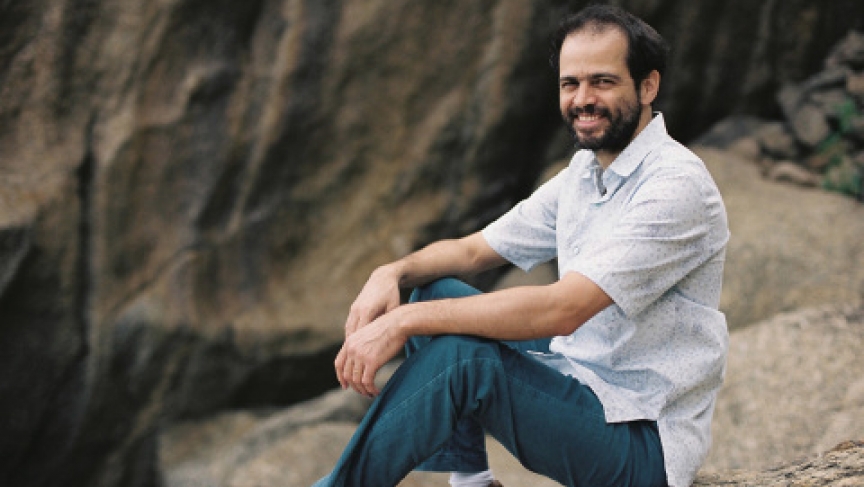 Brazilian singer-songerwriter Moreno Veloso is out with his new album, Coisa Boa, his first in 13 years.

Moreno Veloso's new solo album, Coisa Boa, has its roots in some really old stuff: Brazilian music from the 1930s right up to the '70s.

But even with the album's roots in traditional Brazilian music, 41-year-old Moreno is creating his own identity — and that's no small feat.

After all, in Brazil, Moreno's father, Caetano Veloso, is a beloved composer, singer and former political activist. He's a legend for many Brazilians, filling a similar role to the one his contemporary and fellow musical activist Fela Kuti played in Nigeria.

He was the creator — and intellectual consciousness — of the sound known as Tropicalismo. As Moreno says, "I think it's a natural thing when you're in the same family, sometimes the voice is close to the timbre and stuff. But I also learned how to sing with my father."

Cosia Boa, or "Good Thing" in Portuguese, is Moreno's first album in 13 years. He's clearly gotten more comfortable in the recording studio. "I'm a little less shy now than I was," he says. "And I'm a little less experimental on this album. I think I'm trying to do the songs as they appear to me, rather than try new stuff on it."

Takako Minekawa, a Japanese singer whom Moreno has known for several years, benefited from this newfound focus; their voices mesh beautifully on the song "Onaji Sora." "We admire each other," Moreno says. "We were trying to do something very special together and I think we did it."