Dr. Jeff Wilson, otherwise known as Professor Dumpster, resides in a modern dumpster behind the women’s dorm at Huston-Tillotson University.

Dr. Jeff Wilson is taking a novel approach to teaching sustainability: he's living in a dumpster.

The Dumpster Project is not a gimmick: it's a serious experiment in sustainable living. “The main point of this entire experiment is to test if one can have a pretty good life on a whole lot less,” says Wilson, who's professor of biological sciences at Huston-Tillotson University in Austin, Texas. Wilson has unsurprisingly become known as Professor Dumpster.

“This is obviously an extreme example," he says. "I've moved into 36 square feet, which is 1 percent the size of the average new American home today.”

The lack of plumbing was also an issue, as one might imagine. “Not only is it not a lot of fun urinating into a bottle when it's an emergency, or running to the nearest building in the middle of the night; it's also a problem in terms of design," Wilson says. "Dealing with waste in a healthy way that doesn't give off much of a fragrance in such a small space, and also [meets] coding regulations.”

In Austin, it's currently illegal to have a composting toilet. “What we are probably going to have to do is attach something to the outside of the dumpster or expand one of the walls and just capture the blackwater like in an RV,” Wilson explains.

Now, Wilson is entering the second phase of the experiment: turning the dumpster into an average studio apartment that uses normal appliances. “In this phase, we're going to get a fairly normal toilet and shower head," he says. "We'll probably expand out a few of the walls to give us a little bit more space to do this." 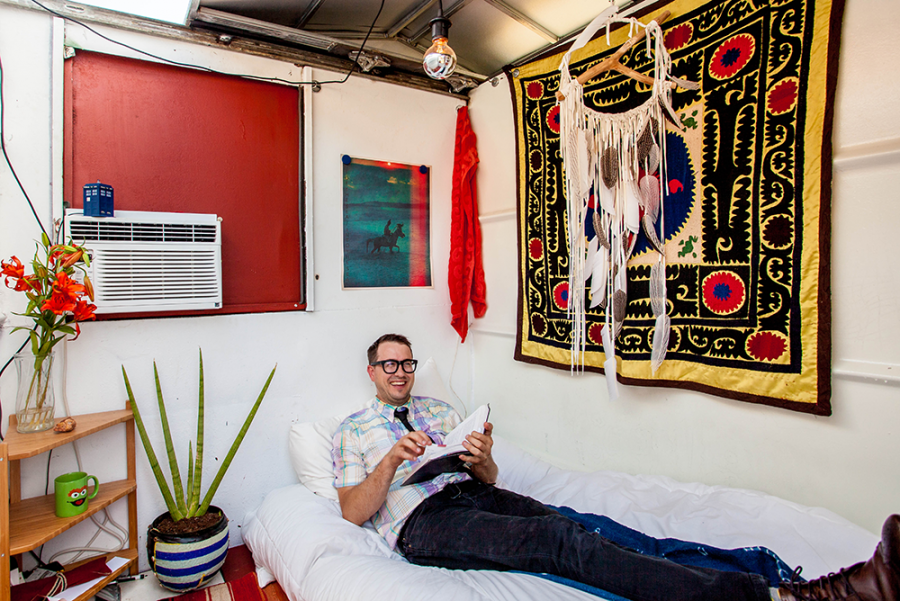 During the second phase of his dumpster experiment, Jeff Moore is turning into into a super-tiny studio with the usual amenities.

After collecting baseline data on the water and energy usage of the “normal stuff,” Wilson will move into the third phase — which he calls “über dumpster.” He hopes to add a sleeping loft, heating and air-conditioning and a water collection system — even a folding balcony.

He'll also switch to solar energy, lower-flow equipment and other newer technologies in the hope of reaching his goal of reducing his water, energy and waste to 1 percent of an average American home.

So why a dumpster and not a tiny house — or even a shipping container? Wilson says he chose a dumpster specifically to build awareness about waste. People tend to think of dumpsters as “these magical boxes that we put our waste into and come back a few days later and everything's disappeared,” Wilson says.

Ultimately, The Dumpster Project is about educating people, Wilson says. “I like to think of the dumpster as a conversation box. As long as a conversation continues to go on, whether it be about sustainability, climate change, [or] tiny homes, I think we'll have accomplished our goal.”