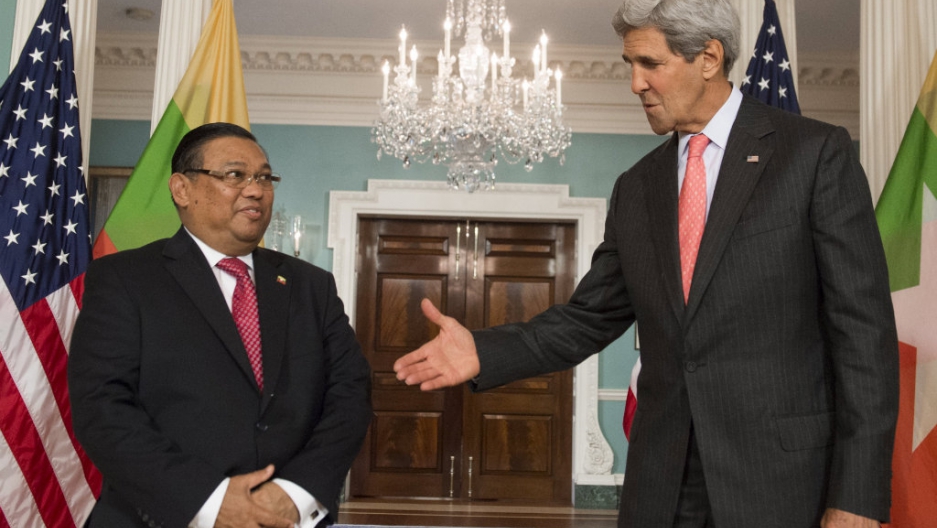 US Secretary of State John Kerry speaks alongside Wunna Maung Lwin, Minister for Foreign Affairs for Myanmar, prior to meetings at the US State Department in Washington, DC on Sept. 30.
Credit: SAUL LOEB
Share

YANGON, Myanmar — Myanmar's foreign minister Wunna Maung Lwin took to the podium at the United Nations building in New York late last month and told the international community that “all major concerns related to human rights” in the former police state had “been addressed to a larger extent.” Given the government's efforts in this field, he asserted, his country “had now reached the middle tier of the human rights ladder” and should no longer be subjected to the scrutiny of the UN Human Rights Council.

While the minister's speech drew polite applause, his claims could hardly have been taken seriously.

About 10 months ago, delegates from the same chamber had passed a condemnatory resolution on Myanmar's rights record and events this year appear to indicate that, if anything, the country may be heading backwards. Vicious war crimes committed by the national military in Kachin state, repressive measures against the media and impunity for a range of other abuses all attest to such a state of affairs.

So does the fact that in the past 24 months the Myanmar government and its agents have been twice accused of crimes against humanity by leading human rights groups — charges that the political elite in the capital of Naypyidaw have barely acknowledged, let alone addressed.

Both allegations resulted from careful legal analysis of the government and security forces' treatment of a Muslim minority known as the Rohingya, who are the targets of prejudice and demonization throughout Myanmar, formerly known as Burma. Members of monk-led Buddhist-chauvinist organizations such as the “Ma Ba Tha” and the 969 movement have been particularly active in promoting the notion that the Rohingya are the vanguard in a Muslim invasion of their homeland.

For their part, the government describes them as illegal immigrants from Bangladesh, despite evidence to the contrary.

Roughly 140,000 Rohingya have been confined to squalid camps following massive displacement caused by pogroms that took place in 2012; two outbreaks of anti-Rohingya violence this year preceded a dramatic reduction in humanitarian and medical assistance for the minority.

Aware of the controversy over Myanmar's treatment of the group, whom some have identified as leading candidates for the world's next genocide, the foreign minister announced an “action plan” for Rakhine state and appealed to the international community to lend its support to the program.

The plan, a draft version of which was leaked to Reuters, was developed with input from NGOs, UN agencies, civil society actors as well as foreign diplomats and outlines a series of measures to be implemented within the next three years. The plan includes a proposal to assess the minority's eligibility for citizenship en masse. The government stripped the group of virtually any such rights in 1982, since which time they have been officially stateless.

While this move appears progressive at first glance, a closer inspection presents a very different picture. The plan demands that any Rohingya applying for citizenship must consent to be classified as a "Bengali" in accordance with Myanmar's official view of the group. It also states that those “without adequate documents” will be placed in “temporary camps” — a fate that may befall tens of thousands of families, if not more, who do not have government-produced paperwork despite their presence in the country for generations. The same consequences automatically apply to all those who refuse to surrender their identity.

Those detained will stay in such conditions indefinitely while Myanmar authorities will seek to “[w]ork with UNHCR to resettle the illegal aliens elsewhere,” according to the draft.

When I asked him how such an effort would likely play out, Phil Robertson, Human Rights Watch's deputy director for Asia said, “UNHCR will not accept such an assignment, which would be tantamount to creating refugees by taking them across a border to flee persecution, so we expect that there will be no exit from those camps for those refused citizenship.”

If the plan is implemented as outlined in the draft, the result will be a probable “new Burmese apartheid,” he said.

Already the citizenship verification drive mentioned in the plan has been operating for months in pilot form and is already escalating repression in some parts of the state.

Chris Lewa, director of The Arakan Project, an organization that monitors the situation on the ground in the region, said that near the town of Maungdaw, communities who refused to declare themselves Bengalis in "family list checking exercises" which appear to be part of the verification process, have faced "a litany of abuses."

“The authorities have beaten people who do not cooperate, others have been denied passage through check-points” she added. “I have heard credible reports that the police have arrested those that do not participate, including community leaders, in order to pressure them to do what they want.”

Despite these abuses and the nightmarish possibilities that the verification scheme looks likely to license, it seems to have attracted the support of at least one aid organization and, allegedly, that of highly influential foreign figures.

“I think the government is engaged in trying to find solutions for the people in the camps, and that solution is through the verification and the citizenship process,” a senior staff member from UNOCHA, the UN's humanitarian coordination body, told a Burmese television network last month.

“The American embassy and government think it is a great development, the citizenship verification process,” an international NGO source, who advises foreign governments, told me. “They see it a positive development, but this so-called verification exercise is dividing the community, because some will get [citizenship], but most will not,” he added. The source requested anonymity so as not to damage his relationship with the US ambassador.

A reliable source within the camps who did not want to be identified said that high-level international delegates who visited the Rohingya encouraged community leaders to participate in the program. In one of these meetings, he claimed, Vijay Nambiar, special adviser to the UN Secretary-General on Burmese issues “told Rohingya elders we had better participate with the government so that we could get citizenship and education rights.”

If true, these claims would not be the first examples of the US or members of key UN bodies gravitating toward the government's position on the Rohingya. A State Department official told reporters earlier this year that they think the issue of the group's ethnic name should be “set aside,” while UN Assistant Secretary-General Haoliang Xu referred to concerns about the use of the name “Rohingya” as “an impediment to focus on the real issue that is citizenship” in an interview with Democratic Voice of Burma.

In other cases, controversy was provoked when a UNICEF staff member reportedly apologized for using the word “Rohingya” during a presentation; last month two press releases, from UN bodies and the International Red Cross respectively, opted to use the word “Muslim” when referring to the group.

All these are symptomatic of a greater trend in which the Rohingya's vital needs are increasingly relegated to the sidelines. Meanwhile the rigid stance of the government is granted greater accommodation and, in the process, legitimacy by influential international actors in Myanmar.

Referring to such acts of compromise, Matthew Smith, CEO of Bangkok-based NGO Fortify Rights, observed that there is still no agreement among UN agencies and donors on terminology

“It's surprising that the UN and donors are missing the very basic point that communities have a human right to self-identify and to be free from discrimination,” he said.

On the broader issue of the verification program and the Rakhine action plan, Smith said that “it's morally repugnant that any agency or donor would support the citizenship-scrutiny [scheme]. It's a patently discriminatory process.”

“These agencies are risking complicity in what could amount to ethnic cleansing,” he added.

Such a prospect remains very likely indeed if the “action plan” is implemented; given the stakes for the Rohingya, the international community and the UN should be doing more to ensure that the government's “solutions” do not make a terrible situation even worse.

Emanuel Stoakes is a freelance journalist and researcher in the field of human rights and conflict. He has produced work for Al Jazeera, The Daily Telegraph, The Guardian, The Independent, The New Statesman, Vice and Souciant magazine, among others.