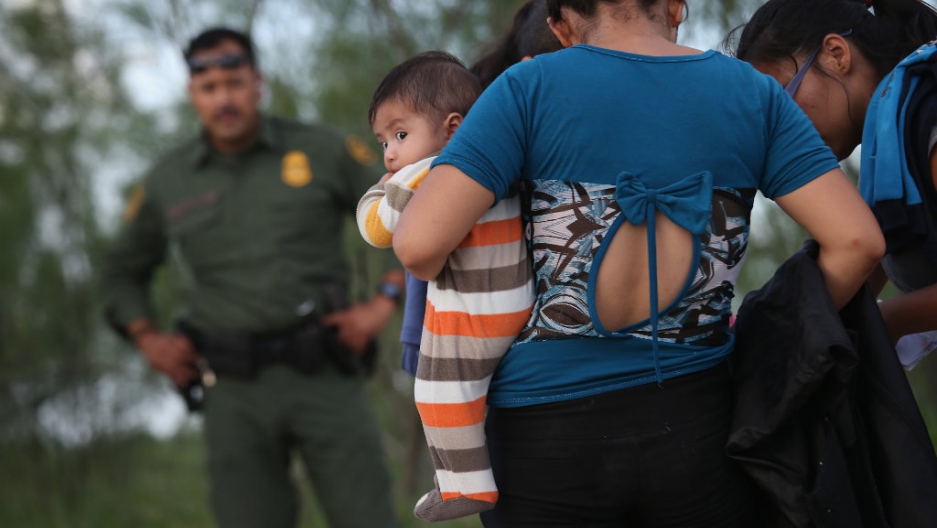 Families of Central American immigrants turn themselves in to US Border Patrol agents after crossing the Rio Grande River from Mexico to McAllen, Texas on Sept. 8. Although the numbers of such immigrant families and unaccompanied minors have decreased from a springtime high, thousands continue to cross in the border illegally into the United States.
Credit: John Moore
Share

AUSTIN, Texas — In America, women and children as young as 11 months old are being jailed.

More than 500 women and children are currently detained by Immigration and Customs Enforcement (ICE) in a for-profit detention center in Karnes City, Texas. Six hundred more are held in Artesia, New Mexico.

Among those detained was Nayely Bermudez Beltran, a 7-year-old from El Salvador who is suffering from a malignant brain tumor. Nayely’s mother, Sara Beltran Rodriguez, came to the US border with her daughter in July, fleeing family violence in El Salvador so severe that she feared for their lives.

Detained in Karnes without medical care, Nayely was in more danger of dying in the US than she was in El Salvador. Despite the fact that Sara had demonstrated that she qualified for asylum, ICE still wouldn't release her and her daughter.

It took a concerted campaign by community advocates calling ICE to pressure them into releasing this critically-ill child, who was being held for no reason related to her case.

Why was Nayely, like many others still at Karnes, being detained for no legal reason?

They were apprehended because they entered the country without immigration papers. However, international law – to which the US is a signatory – calls on states not to detain refugees while their cases are being processed. Asylum seekers can be held only if they pose a security threat or are a flight risk. It is hard to imagine these mothers and children as a threat to our national security.

Asylum seekers in general are in fact very likely to be law-abiding. A recent document showed that 92 percent report to their immigration officers after being released.

ICE has an explicit policy of refusing them bond or release, even after they have demonstrated that they meet the criteria for political asylum. ICE is treating these women and children as if they are terrorist threats.

As an anthropologist who has spent the last 3 years working with women detained in adult immigration detention facilities, I can imagine the agony of Sara’s decision to flee as she weighed the risk of death by violence against a risk of death by cancer for her small daughter.

I have watched women, whose detention extended weeks and months, decline in physical and mental health through their isolation from family, poor nutrition, lack of access to health care, and, most important of all, the psychic trauma of incarceration.

How can this be happening in a democratic country, you might ask? Hasn’t the United States been a world leader in refugee protection? Yes. Don’t we have laws against arbitrary detention? Yes.

Five years ago, the Obama administration made the decision to end family detention — the holding of women and their minor children in prison-like conditions while they await the outcome of their civil immigration proceedings.

The administration acted appropriately following a successful lawsuit by the American Civil Liberties Union and community advocates against the Department of Homeland Security. The suit called attention to the appalling conditions to which women and children were subjected in the T. Don Hutto Immigration Detention Facility in Taylor, Texas.

However, with the recent political firestorm over the arrival of an increased number of unaccompanied minors from Central America, politics are superseding the democratic rights protections we expect the United States to enforce. Elected officials such as Texas Gov. Rick Perry and Sen. Ted Cruz, who are seeking their own political gains, have appropriated the refugee situation at the border and exaggerated the threat posed by refugee children to our national security.

Last month, family detention started up again, resulting in more than 1,000 women and children being detained.

It is hard for people who have never been deprived of their liberty to understand its impact. Incarceration has psychological effects on all prisoners, but the impact on small children who have committed no crime is devastating to watch.

Advocates working at Karnes report watching children lose weight and become listless and despondent right before their eyes. These detention centers have conditions so bleak that local advocates have filed complaints with Child Protective Services to try to address the hardship these children are facing.

The Obama administration decided once that family detention was a bad policy. Reinstituting it now based on a non-existent threat, and doing harm to families already victimized by violence in the process, is doubly wrong.

Shannon Speed is an anthropologist at The University of Texas at Austin and a public voices fellow with The OpEd Project. She has worked for the last two years with the Hutto Visitation Project, a network of volunteers providing support to immigrant women detained in the T. Don Hutto detention facility.